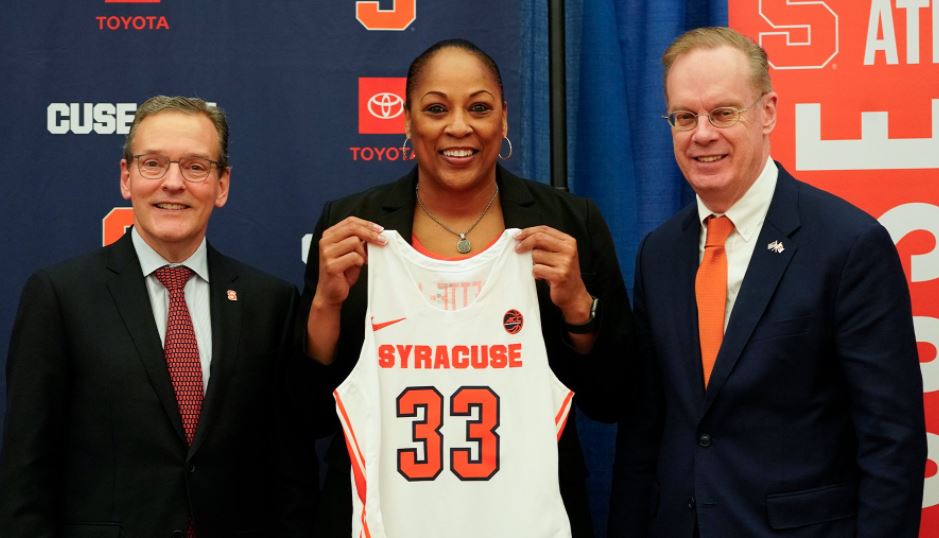 Syracuse University has always been home for Felisha Legette-Jack ’89.

Growing up in a Syracuse Housing Authority building, Legette-Jack dreamed of taking her basketball talents to only one place—Syracuse University—following a decorated career at Nottingham High School.

The University was Legette-Jack’s home for a record-setting four-year career from 1984-89 that saw her set Orange women’s basketball records for career points scored, rebounds, and field goals and free throws attempted and made. 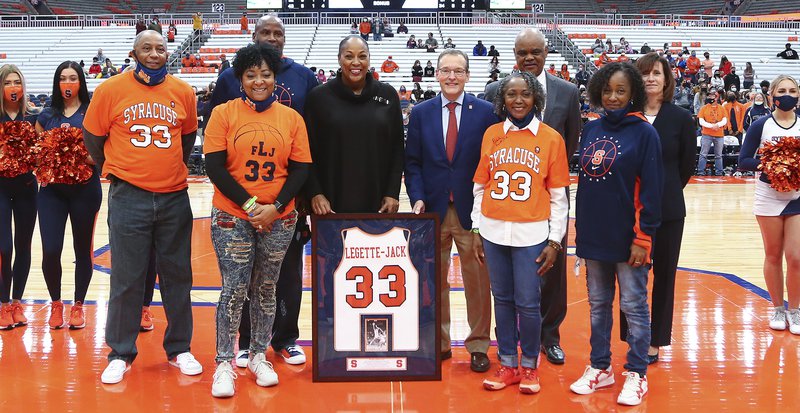 More than three decades after Legette-Jack last donned her No. 33 jersey—which sits high atop the stadium rafters as a tribute to the first female student-athlete to have her jersey retired in school history—the charismatic and transcendent standout who helped lead the program to unprecedented heights officially came home Monday morning.

Legette-Jack was introduced as the seventh head coach in program history during a press conference at the Carmelo K. Anthony Basketball Center on campus.

“I am home. I am home,” Legette-Jack said while surrounded by former teammates and University officials. “This place is special. People that come to Syracuse, they don’t come as a viable option. They come here because it’s a destination—we’ve recruited from all over the world.”

Athletic Director John Wildhack and the search committee didn’t need to look far to find its next women’s basketball coach.

Legette-Jack—who served as an Orange women’s basketball assistant coach on Marianna Freeman’s staff from 1993-2000—already had established herself as a well-regarded college coach. Her previous coaching stops included Hofstra (2002-06), Indiana (2006-12) and most recently up the New York State Thruway at the University at Buffalo.

Legette-Jack guided Buffalo to four NCAA tournament appearances, including during the 2021-22 season. She led the Bulls to a school-record 29 wins and the program’s first Sweet 16 appearance in 2018 and amassed a school-record 202 wins in 10 seasons.

But an opportunity to head home and take over the Orange was too much for Legette-Jack to pass up. 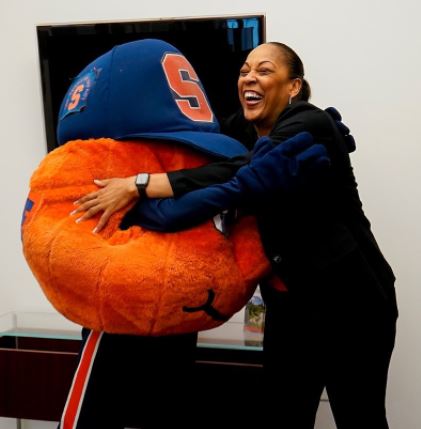 “Coach has the experience. She has the expertise. She has the vision, and she has unsurpassed passion. Today starts a new era, a new book in the history of our women’s basketball program. … I invite and encourage our community, alumni and Syracuse fans around the world to get behind and support this program. We need all of you. The future of this program is bright, and it begins now,” Wildhack said.

Legette-Jack’s teams are known for being successful on and off the court. A no-nonsense coach who holds her student-athletes accountable for their actions on the court and in the classroom, Legette-Jack plans on employing what she calls the C.A.B. approach for developing a bond with her new student-athletes: character, attitude, then basketball.

“This is a coach who wants her students to succeed as human beings, and as students and on the court. I know Coach Legette-Jack is going to make us a better place, and that she and her team are going to be leaders in the ACC (Atlantic Coast Conference). … Welcome home, coach. We are with you all the way,” added Syverud.

After Wildhack reached out and extended the job offer to Legette-Jack last Wednesday, the first person she called was her husband, David. Except instead of sharing the good news, Legette-Jack broke down crying, which caused David to think her alma mater had offered the position to someone else.

“I couldn’t get the words out because I just went to tears. My husband’s like, ‘oh my goodness, how do I help her through this rejection?’ Because it sounded like I didn’t get the opportunity. But after 30 seconds, he said ‘just say it’ and I shared with him that we’re going to go home. And it was pure joy,” said Legette-Jack, a four-time All-BIG EAST selection and two-time honorable mention All-American. 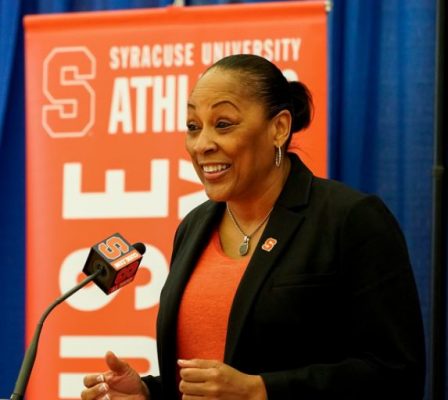 With a rich history and a passionate alumni base, Legette-Jack and Wildhack have no doubts that the program’s newest head coach will hit the ground running and begin the process of bringing in talented student-athletes who buy into Legette-Jack’s vision.

“I’m the most ferocious competitor you’re ever going to meet. When we cross this line, all I think about is these young people have dreams like I did when I was playing this game. … Don’t tell me your dreams and not believe in them because I’ll take your dreams to the umpteenth level. And I take a responsibility for your dreams, and that means your character and your academics and your basketball. So, we get after their academics really hard,” Legette-Jack said.

When asked what her recruiting pitch would be to prospective student-athletes, Legette-Jack seamlessly switched into recruiting mode.

“It’s the best school in the country and we we’re ready to take on this thing. This is not about basketball. This isn’t about school either. It’s about a microcosm of life. And every single day, I get an opportunity to coach young people in the locker room, on the court. … If we can stay true to the Orange and stay true to what we’re doing, we got a chance to not just be great, but we’ve got a chance to change every single student-athlete’s life that come through these doors,” Legette-Jack said.

LISTEN: Hear from Legette-Jack on the ’Cuse Conversations podcast, recorded in December 2021.