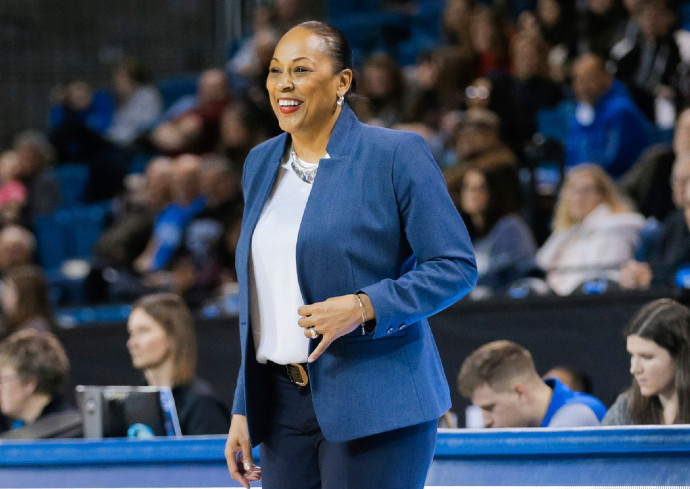 One of the all-time Orange greats, Felisha Legette-Jack ’89 returns to her hometown with more than 30 years of coaching experience.

Felisha Legette-Jack, a 1989 graduate of Syracuse University and Orange All-American, is coming home. The Syracuse native and 20-year collegiate head coach will take the reins of the Orange basketball program immediately.

Legette-Jack is synonymous with Syracuse women’s basketball success. The 1985 BIG EAST Conference Freshman of the Year, three-time All-BIG EAST selection and Syracuse’s first two-time honorable mention All-American, Legette-Jack helped lead the Orange to their first BIG EAST Championship and NCAA Tournament appearance in school history. More than 30 years later, she still ranks in the top 10 on Syracuse’s career scoring and rebounding lists. She is one of three players in program history to score more than 1,500 points (1,526) and grab more than 900 rebounds (927).

“We are thrilled to have Coach Legette-Jack lead our women’s basketball program,” says Director of Athletics John Wildhack. “She is a builder of programs, evidenced by the success she had at the University at Buffalo (UB). She is totally committed to the full development of every student-athlete and staff member who is part of her program. On behalf of Syracuse Athletics, all our alumni and fans around the globe, we welcome Coach Legette-Jack and her family back to Syracuse University and Central New York.”

One of the all-time Orange greats, Legette-Jack returns to her hometown with more than 30 years of coaching experience. She spent the last 10 years building the University at Buffalo’s women’s program into one of the perennial powers in the Mid-American Conference (MAC), leading the Bulls to four NCAA Tournaments, including the 2018 Sweet Sixteen. She is the all-time winningest coach in Bulls history with a 202-115 record and four MAC Tournament Championships. During her career she has guided three different Division I programs to a combined 13 winning seasons, nine postseason berths and six 20-win seasons, and has accrued a 343-279 record.

She will be formally introduced as the seventh head coach in Syracuse women’s basketball history at a press conference on Monday, March 28.

“I’m coming home! These words bring me great joy,” says Legette-Jack. “I thank Chancellor Syverud and Director of Athletics John Wildhack for this amazing opportunity. It is a privilege and an honor to accept this position as your next head women’s basketball coach. The love that I have for our city, our University and our Athletics Department cannot be measured.

“My goal is simple: pursue championships in the classroom and on the basketball court. We will build our program with our C.A.B. philosophy: character, academics and basketball. We will work tirelessly to help our team understand that character will always be first, academics will be a close second and we will find the best athletes in the world to make you all proud.

“We will play with purpose, passion and pride. We will tell our story through our play. Our defense will show with intensity and purpose. Finally, we will earn the right to expand our minds and broaden our horizons together!

Legette-Jack led Nottingham High School to a pair of state titles before attending Syracuse, where she was a standout on Coach Barbara Jacobs’ teams from 1984-89.

At Syracuse, Legette-Jack earned BIG EAST Freshman of the Year honors after helping lead the Orange to their first BIG EAST Championship in school history. As a sophomore, Legette-Jack averaged a double-double (15.8 points per game and 10.1 rebounds per game) en route to honorable mention All-America honors and All-BIG EAST recognition.

The next year she earned honorable mention All-America and All-BIG EAST Second Team recognition. After missing the 1987-88 season due to a knee injury, she returned to the court to earn All-BIG EAST honors for the fourth time in 1988-89. She finished her career as the program’s all-time leader in points, rebounds, field goals made and attempted, and free throws made and attempted.

After graduating from Syracuse with bachelor’s degrees in child and family studies and psychology in 1989, Legette-Jack began her coaching career at Westhill Senior High School on the city’s West Side in 1989. She made the move to the collegiate level as an assistant at Boston College (BC) from 1991-93 and never looked back.

Following her stint at BC, Legette-Jack returned home to Syracuse as an assistant on Coach Marianna Freeman’s staff from 1993-2000. She left in 2000 to become an assistant coach at Michigan State for two seasons, before landing her first head coaching job at Hofstra in 2002.

In four years, Legette-Jack turned Hofstra’s program around. During her final season Hofstra was 19-12 and advanced to the second round of the Women’s National Invitational Tournament (WNIT).

Named head coach at Indiana University in 2006, Legette-Jack guided that program for six years. She led the Hoosiers to consecutive WNITs in her first three seasons, including a 20-win season and WNIT quarterfinal appearance in 2009.

In 2012, she returned to the Empire State when she was named the head coach at Buffalo. Legette-Jack put the UB program on the map during her decade in the Queen City. She led four Buffalo teams to four NCAA Tournaments, most recently this season, and developed the first WNBA draft pick in school history, Cierra Dillard, who was selected by the Minnesota Lynx in 2019. Her UB teams have had five 20-win seasons and averaged more than 19 wins a campaign during her tenure.

The 2021-22 Bulls posted a 25-9 record, including a 16-4 mark in MAC play, and were 14-1 at home. Legette-Jack developed three All-MAC honorees in Dyaisha Fair, Georgia Woolley and Summer Hemphill. Fair finished the season ranked fourth in the nation in scoring average (23.4 points per game) and Woolley also earned MAC Freshman of the Year honors.

The Bulls had their most successful season in 2017-18, posting a 29-6 record, including 12-0 at home. UB earned the first NCAA at-large bid for the MAC since 1996 and danced its way to the Sweet Sixteen for the first time in school history.

Born Sept. 4, 1966, in Syracuse, Legette-Jack and her husband David, have one son, David Maceo, who is a graduate student on the UB men’s basketball team.

All 2022-23 season ticket renewals will be available soon. Current season ticket holders will receive an email and phone call from an account representative as soon as details are available. Fans looking to purchase new season tickets for the upcoming season can now place a $25 per seat deposit by visiting cuse.com/tickets.

LISTEN: Hear from Legette-Jack on the ’Cuse Conversations podcast, recorded in December 2021.