Marla Aaron ’88 Proves Jewelry Can be Beautiful, Functional and Life-Changing 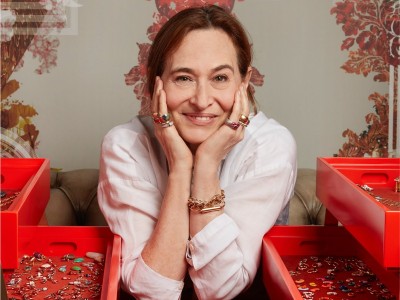 Marla Aaron ’88 left her career in the advertising industry to launch her own jewelry brand.

Growing up, Marla Aaron ’88 had a keen eye for jewelry and a penchant for handcrafting wearable works of art for her friends out of fish hooks and other assorted parts.

But Aaron harbored no hopes of entering the jewelry-making world. Instead, she enrolled in the S.I. Newhouse School of Public Communications, earning a communications degree.

By the time 2012 rolled around, Aaron carved out a successful and lucrative career in marketing and advertising. Aaron’s work took her all over the world, including as senior vice president of communications at MRM, the digital marketing division of McCann Worldgroup, an advertising firm.

While she was good at her craft, Aaron felt something was missing from her life. So she quit her advertising job to launch Marla Aaron Jewelry, blending her creative side with a desire to produce pieces of jewelry that are both artistic and mechanical in nature.

“I was obsessed with this idea of a carabiner clip, a series of locks and chains that could be combined in assorted ways. I spent a lot of time in Manhattan’s jewelry district, reading up, studying and experimenting with this idea that these locks and chains could be combined. That was the starting point of my business which I launched from my kitchen table,” Aaron says.

New York City’s 47th Street is home to a large collection of jewelry-making workshops, and at these workshops, Aaron was dissuaded by many jewelry makers from following her dreams. But their objections only made her more determined. Eventually, Aaron found one head of a workshop who believed in her vision. He visited local hardware stores, purchased carabiners and was all-in on helping Aaron’s creative carabiner concept come to life. “To this day, his workshop still produces a large number of her pieces,” Aaron says.

For the first year, Aaron supplemented her vision by earning money on the side as a freelance marketing consultant, but it didn’t take her long to realize that if she wanted her company to be successful, she would need to focus all of her efforts on Marla Aaron Jewelry.

As Aaron prepared for the biggest sales pitch of her life—convincing her husband, David, that she could cease her freelance work to get Marla Aaron Jewelry off the ground—she put together a presentation touting the benefits of going all-in on her company and betting on herself.

The switch meant the Aarons would go from a two-income family to one income for the foreseeable future, and Aaron’s presentation to her husband was based on a lie she needed her husband to believe.

“I told him that within six months, my jewelry would be carried and sold in the top 25 retail stores in America. I really just made it up, but I believed it would be possible and he bought in,” Aaron says.

Aaron took her prototypes to the streets, going door-to-door trying to sell her idea to area jewelry shops, but the going was slow. Until she turned to social media to help grow her business.

Aaron’s two sons provided a crash course on how to use Instagram, and Aaron relied on the storytelling skills she learned at Newhouse and the advertising skills from her previous jobs to launch herself and her company on Instagram.

Today, Aaron could easily be considered a social media influencer, as her verified Instagram account has more than 118,000 passionate followers. Aaron effectively creates Instagram stories and posts to promote her products through content that reflects her upbeat personality.

“I started posting about my jewelry on Instagram, and the reaction was almost instantaneous. We became seen in ways I would have never before imagined, and in ways I never would have known about before. We started growing little by little and it just took off,” Aaron says.

Sales have doubled every year since she launched, including during the turbulent times of the COVID-19 pandemic.

With a robust presence on social media and a beautiful showroom on West 47th Street in New York City, Aaron is living out her dream while proving that her jewelry can be beautiful, functional and interchangeable. Among Aaron’s celebrity clients: actresses Julianne Moore and Blake Lively.

“I consider myself a reluctant business owner. This was my passion, and it was all-consuming. I am obsessed with this project and obsessed with this idea that jewelry can transform, can be precious and can make a difference in people’s lives. I’m giddy with excitement when I see people wearing our jewelry,” says Aaron. 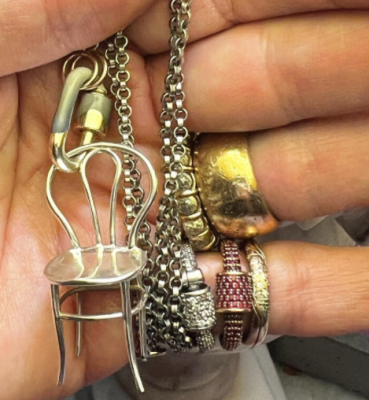 But Aaron’s pieces are about more than intersecting art with functionality. She uses her jewelry to support issues that matter to her. During the depths of the pandemic, Aaron designed and sold tiny chairs as part of her “Take a Seat” campaign, raising nearly $80,000 to benefit New York City-area restaurants through a partnership with the World Central Kitchen.

Beginning in 2016, in honor of Mother’s Day, Aaron gave out sterling silver heart locks to single mothers around the country as part of her “LockYourMom” campaign. Last year, Aaron handed out more than 1,500 locks to remind these mothers they are not alone.

When the conflict in Ukraine broke out in February, Aaron again felt the call to use her jewelry to do good for those in need. Partnering once again with the World Central Kitchen, Aaron’s “Take a Seat” campaign sold out in less than two weeks, raising $42,600 to provide meals to refugees fleeing Ukraine.

“How could one not want to help the refugees in Ukraine?” Aaron says. “I’ve had a lot of good fortune in my life and with my career, and I want to pay it forward.”