Paulina Thompson has built her professional reputation as the person transitioning veterans know they have to go see. Leaving the military is a challenge for many service members and veterans. Thompson has spent her entire professional life in various human resources (HR) functions and is ready to help. She has more than 20 years of experience in career counseling for service members and families. For the past five years, Thompson has worked as an Onward to Opportunity coordinator with Syracuse University’s D’Aniello Institute for Veterans and Military Families (IVMF), showing countless military veterans and spouses training that makes them more marketable. 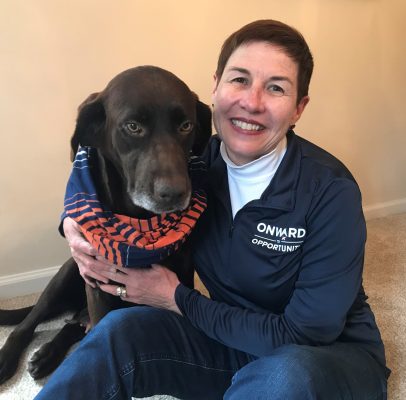 “We help them figure out what they want to do on the other side of the uniform,” she says. “Despite the sea of goodwill that exists for transitioning veterans and military spouses, the issues I saw 20 years ago are some of the exact same challenges we see today.”

A perpetual challenge is helping them envision what to do after military service. That’s why a big part of Thompson’s work is to help identify marketable options, connect service members and spouses with training and program assistance, and help them consider their value in the marketplace. She also counsels people to overcome the challenge of time. She suggests getting started three to five years early, which leaves time for more education or experience.

Counseling military service members and spouses on how to navigate career transitions is personal for Thompson. Her husband Jeff served as a naval aviator, which demanded a move to a new duty station every two years or less. It didn’t make sense for her to go along every time, since he would have to ship out soon after arrival anyway. She was fortunate to keep her career on track and used her undergraduate degrees in math and economics and an MBA working for telecommunications giants on human resources policies and procedures.

“I did some downsizing, labor relations, labor and development and spun around all the different HR functions, which made me more marketable working with people transitioning from the military,” she says.

When her husband finished his military service, they settled in the Hampton Roads area, which is home to the largest naval installation in the world.

“There’s maybe one person in my neighborhood who’s not military-connected,” she says.

She found her niche working on base and with other nonprofits to counsel people who were getting out of the military. She also fed her long-held passion for raising guide dogs to become future therapy dogs. And this is where her passions linked up to breed something special.

“If you can match your personal and professional passions, it’s such an incredible win,” she says.

In the late 2000s, Thompson was briefing a few hundred service members who had just returned from deployments in Iraq and Afghanistan. They were clearing through Norfolk, stuck in various required briefings, waiting to finally be allowed to go home.

“And here comes Paulina Thompson trying to give them a mandatory briefing on career transition,” she says. “Imagine how I was received. If they had a basket full of tomatoes, they would have pummeled me out of there.”

She saw service members facing all matter of mental, physical and emotional challenges. Many were on a medical hold waiting for permission to go home. Anybody else might have carried on or given up. Instead, Thompson saw an opportunity to innovate and solve a problem. She put together a proposal for a pet therapy program. She briefed commanders, found partners, harnessed the community and spread the word. Soon, anybody who wanted to come play with dogs could.

“People came from four corners to play with those dogs,” she says. “Tensions came down, people were more relaxed. People missed their dogs, and this was a little piece of home away from home until they could get back to their families.” 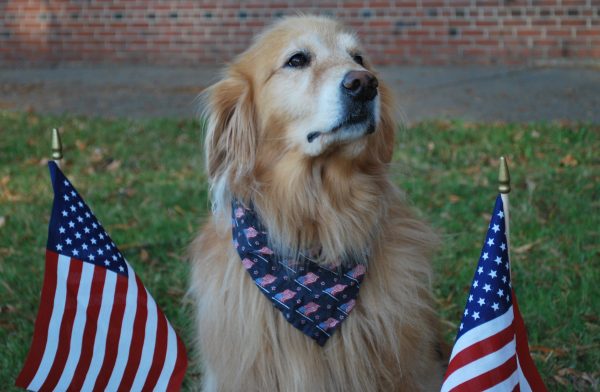 Thompson founded the most popular program on the base. Then she took it even further to organize send-off events for service members who were about to deploy to Iraq and Afghanistan. For years, every Saturday at 6 a.m., Thompson and a band of dog-loving supporters would turn out with their therapy pups to share one last piece of normalcy and home with service members before they shipped off. Then a sobering moment came. A friend brought along a niece, in her 20s, who remarked that the country needed to see what they were doing.

“She said she didn’t even know we were still going to Iraq and Afghanistan,” says Thompson. “Here we were sending people off every week, many of whom might never return home to their families, and here’s somebody who should absolutely have known that and didn’t.”

That moving experience propelled Thompson even further into creating opportunities to serve her military community with therapy dogs. She built 15 teams and kept a full pipeline of puppies for people to snuggle all around the Hampton Roads area. She says it’s easy because everybody has some military connection, and everybody wants to help. It’s not easy for everybody to lead such an operation, though. After raising and training dozens of dogs to move along to advanced guide dog training, Thompson is on her 73rd foster dog through a rescue organization. It’s clearly a labor of love.

“If I shed a few tears because I have to give up a pup, to give somebody a chance to live, well then it’s worth it,” she says.

It’s why they usually end up saying: You’ve got to go talk to Paulina.