105th Chancellor’s Review to Be Held in Person March 25 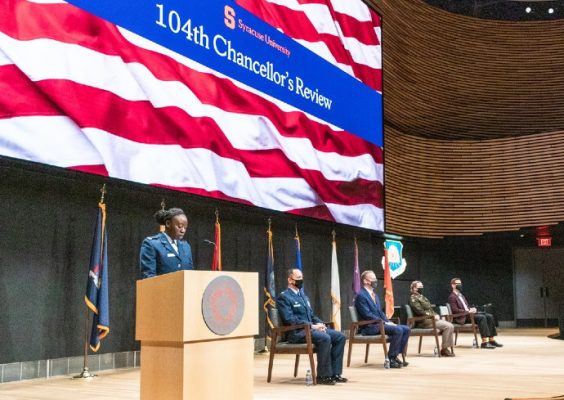 The 104th Annual Chancellor’s Review and Awards Ceremony was held virtually in 2021.

The 105th Chancellor’s Review and Award Ceremony will be held live and in person again in the stadium on Friday, March 25, at 10 a.m. There will be a light luncheon following the ceremony in Club 44.

The event honors the distinguished performance of the cadets throughout the academic year while working toward commissioning as second lieutenants in the Army and Air Force upon graduation. Syracuse University’s Army ROTC is one of the longest consecutive running programs of its kind in the country.

Past distinguished University ROTC graduates include Air Force Colonel (retired) Eileen Collins, who was the first woman to pilot and command a Space Shuttle mission, and Major General (retired) Peggy Combs, who became the highest-ranking female military officer to graduate from Syracuse University. Collins graduated from Syracuse in 1978 with a bachelor of arts in mathematics and economics, and Combs was commissioned in May 1985 as a distinguished military graduate. Combs is currently a board member of the University’s Office of Veteran and Military Affairs.

Please RSVP to labates@syr.edu by March 18. Parking for the event is available at the Irving Garage.