During the week leading up to the Super Bowl, the scene along Radio Row at the Los Angeles Convention Center can best be described as chaotic. 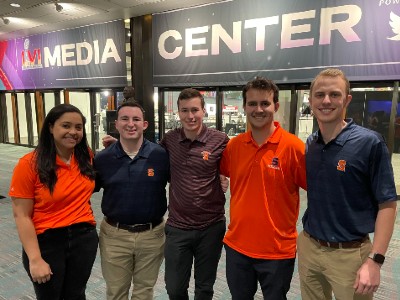 Members of the media in town to cover every aspect of the game are tracking down interviews with former and current National Football League players. Popular luminaries from the world of sports talk radio and celebrities looking to promote a new book or a new product make the rounds on a variety of radio stations and podcasts.

Amidst the hustle and bustle of this year’s Radio Row, five Syracuse University seniors felt right at home creating content and taking advantage of an invaluable opportunity to cover the Super Bowl, the biggest sporting event in the world. 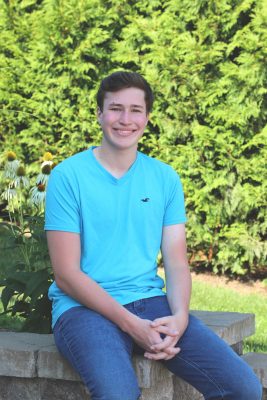 “I’m 100% blessed. When I first enrolled at Syracuse University, I never thought this was possible. I kept working and grinding and making connections, and eventually [Professor] Olivia Stomski said we need a producer, someone who grinds, puts their head down and gets to work. To have four of my best friends come with me was the cherry on top and I’m so grateful for this opportunity,” says Shea, a senior television, radio and film major who served as the group’s lead producer.

Radio Row serves as headquarters for the sports talk radio shows in town to cover the Super Bowl. Media members set up remote work stations that serve as their broadcasting home as they report on Super Bowl LVI.

While members of the Los Angeles Rams and Cincinnati Bengals were gearing up for the big game, the University’s sports broadcasters were doing the same, securing interviews with Ian Eagle ’90, who handles NFL play-by-play duties for CBS, and Adam Schein ’99, a longtime radio host on Sirius XM and NFL.com contributor.

The students produced a daily three-hour live sports talk show from 10 a.m. to 1 p.m. on Z89, and they also produced live broadcasts for CitrusTV and packages for WAER. 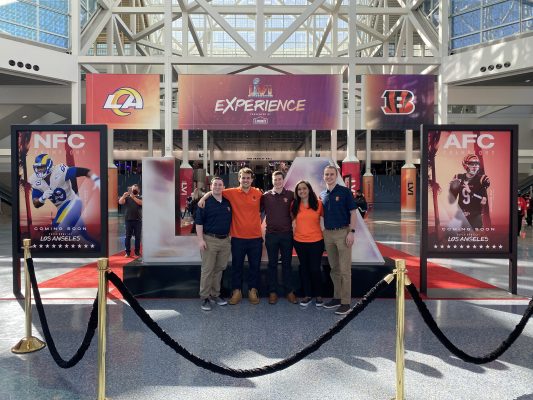 Students from the Newhouse Sports Media Center pose at the Los Angeles Convention Center while covering the Super Bowl from Radio Row.

When the week began, the students said they could tell the professional media members viewed them as student journalists and wondered what they were doing on Radio Row. But after five long days—the students arrived around 8 a.m. and worked well into the evening hours each day—Klein said they demonstrated how serious they were about their Super Bowl assignment. 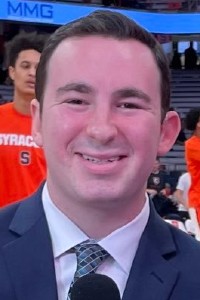 “We’ve never been in an environment like that, but thankfully, Syracuse University and the media outlets we work for on campus prepared us well for a moment like this. The biggest lesson I learned was to trust your training, because we never felt like we were out of our element. We felt prepared for this and I am proud of the work we produced,” says Klein, a broadcast and digital journalism student.

This was the second straight year covering the Super Bowl for Clique and May, who at the height of the COVID-19 pandemic traveled to Tampa Bay, Florida, to report on Super Bowl LV. Elique and May both said they learned from their unusual 2021 experience on Radio Row—where the number of credentialed media and participating guests were far below normal figures—and applied those lessons on how to properly plan out their show guests for this year’s trip. 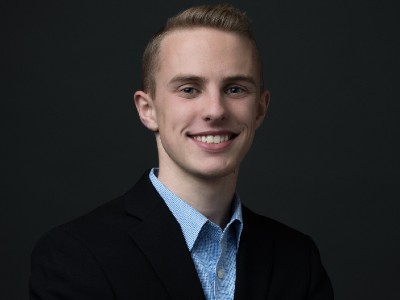 “Last year, we weren’t given as many interview opportunities as we were at the peak of COVID and the whole experience was limited. This year, we were determined to get the full Radio Row experience and take advantage of every opportunity the week provides. We were more aggressive when it came to getting guests and our radio show was so much better this year,” says May, a broadcast and digital journalism student.

With so many potential Radio Row guests, and very little time to prepare for an interview, Elique says the emphasis her Newhouse professors placed on active listening is one of the biggest ways her Syracuse education benefitted her while covering the Super Bowl.

Speaking of listening, besides having access to more potential guests, this year’s Super Bowl experience was a once-in-a-lifetime opportunity to blend two of Elique’s biggest passions: sports and music.

Elique attended the Super Bowl halftime show press conference and heard from Snoop Dogg, Mary J. Blige and Dr. Dre. Afterwards, Elique produced a long-form video from the press conference where she explained the magnitude of having so many talented hip-hop performers—Eminem and Kendrick Lamar were also featured during the halftime show—exposed to a new generation of viewers. 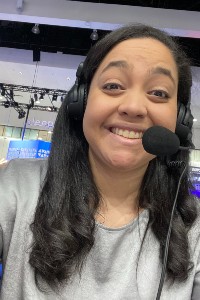 “That was the single coolest thing I’ve ever done in my life. Seeing Snoop and Dr. Dre and Mary J. Blige was incredible. I got to interview Todd Kaplan [the vice president of marketing for Pepsi], who was in charge of the halftime music, and it was great bringing together pop culture and music with sports and the Super Bowl, things I love,” says Elique, a broadcast and digital journalism student.

The Newhouse Sports Media Center has organized these trips and paid for its students to cover the Super Bowl for the last four years, says Olivia Stomski, the Center’s director and a professor of practice in broadcast digital journalism and television, radio and film.

Stomski says the Center helps organize and fund the student journalists’ travel to and from the Super Bowl and assists with the scheduling and coordinating of interviews with notable athletes, industry professionals and Orange alumni.

“We don’t see our students as student media, we see them as the media. They are trained as professional journalists, so it is no surprise that year after year, our students have been welcomed back to the Super Bowl. The content that our students produce and create at the Super Bowl gets better every year,” says Stomski, who credits the generosity of alumni donors, in particular Howard Deneroff ’89, executive vice president and executive producer of Westwood One Sports.