Living on campus, bonding with friends and trying different subjects before declaring a major are college rites of passage. Not every college student gets the same experience. As Amanda Lalonde ’23 discovered, some of the best lessons in higher education come after a roundabout journey. 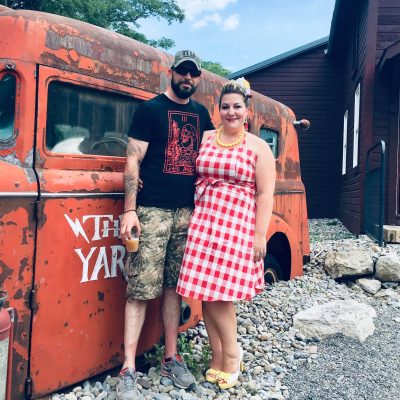 Amanda LaLonde ’23 with her husband Jon

LaLonde powered through different schools and degree programs, into military service in the Navy and Navy Reserve and on to full-time family duty, before coming back home to Central New York where it has all clicked for her at Syracuse University. Here, she’s embracing her best college experience as an Honors student and recipient of the Louis A. and Patricia H. Mautino Veteran Endowed Scholarship.

A New York native, LaLonde had to move with her family to Tampa, Florida, before her senior year of high school. She struggled to make friends that year before graduation. She applied to one school, and while commuting there and back, couldn’t connect with her fellow students. It wasn’t long before she started slacking off. By the end of her first year, she dropped out.

LaLonde considered joining the Army like her younger brother recently had, thinking it might give her a much-needed push to do something more productive. Though she wasn’t in shape enough to meet the Army’s requirement, a Navy recruiter called to check her interest. They offered to work with her to help get her in shape, and LaLonde welcomed the motivation and support. Even now, 17 years later, she still keeps in touch with that Navy recruiter. 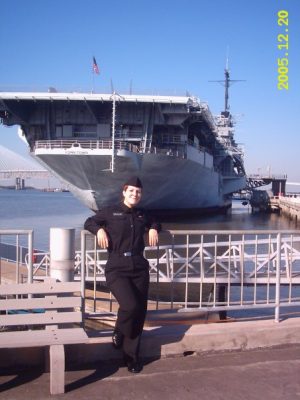 LaLonde in 2005 during her Navy career

LaLonde joined the Navy in 2005, and after basic training, started technical training to specialize in nuclear engineering. It was not a good fit for her at all.

“I purposely failed out of that,” she says. “It was very demanding, lots of physics and math, and I’m not the best at either of those things. I wanted to be in the military, not sitting in a classroom.”

She was stationed at the USS Bataan in Norfolk, Virginia, where she met her future husband Jon. Soon after they welcomed their first son Tyler, Jon deployed to Iraq. Geographically single parenting a newborn while working full-time on active duty was extremely demanding. Despite all the challenges, LaLonde managed to complete her associate degree in marine engineering.

“I’m super proud of that degree. I will forever be proud of it,” she says. “It was not easy, but I got it done.”

When Jon returned from Iraq, LaLonde saw the opportunity to return to school for her bachelor’s degree.

“I thought I wanted to do computer engineering, which would be a financially stable career move, but I was barking up the wrong tree,” she says. “It was a constant struggle.”

Around that time, LaLonde learned she was pregnant with twins Jack and Noah. She had medical appointments to keep and too many competing priorities to manage at home to make her continuing education possible. She transitioned to the Navy Reserve, and again withdrew from school before gaining a foothold.

Meanwhile, Jon was involuntarily separated from the Navy, and they briefly moved to Florida to be closer to family before moving home to Central New York in 2012. LaLonde managed with three small children while Jon’s job gave him only a month at home between three-month stints in Afghanistan. She stayed in the Navy Reserve until 2014, when she was dismissed for not meeting the height and weight requirement. The experience left her, “a little salty,” but didn’t take the wind completely out of her sails.

“The kids were so young, and they needed so much attention, so I wore the super mom hat for a while,” she says. “We did that for eight years, and the whole experience was exhausting.”

LaLonde says the pandemic prompted her latest return to school. Jon was able to stay home, and with more support, she again took a chance to go back to finish her undergraduate studies, this time at Syracuse University. She’s studying psychology with an integrated learning major in forensic science, which keeps her engaged. 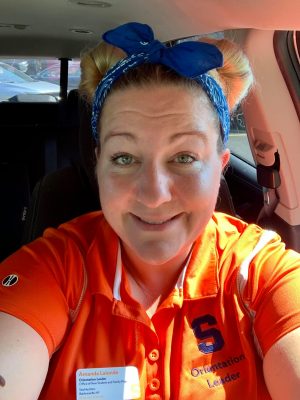 LaLonde served as an orientation leader during Syracuse Welcome in fall 2021.

She also jumped into campus life. She’s been an orientation leader and helped to welcome new freshmen to campus, which she says felt like the college experience she never had. She even tried out to be Otto the Orange. “How many people get to say they tried out to be a mascot?” She’s also part of the Renée Crown University Honors Program, which surprised her because she’d always struggled with academics. It turns out, LaLonde just needed to find a course of study she was passionate about in a community where she’s fully supported.

“I’m so into school, and so motivated by how well I’ve been able to do, I’ll throw my hat in to do all these things,” she says. “I’ve managed to do more than I thought I was going to be able to do.”

LaLonde also felt motivated at Syracuse to get over whatever lingering “saltiness” she had about having to leave the Navy Reserve. She joined the Peer Advisors for Veterans Education and stepped into a leadership role to help direct other military-connected students to resources they may need. She also joined the Student Veterans of America chapter and attended the national conference with other military-connected students from universities across the country.

“Initially I wanted to study psychology to better understand my children and help other families, but I may be shifting my focus to do something that will help other student veterans like me find their way,” she says. “A lot of places, they talk the talk, but they don’t walk the walk. Syracuse has proven they’re actually, legitimately there for military-connected students.”