What’s at Stake in Ukraine? Insights Into the Invasion, De-Escalation and Short- and Long-Term Implications

From the moment Russian President Vladimir Putin launched his offensive into the sovereign nation of Ukraine on Feb. 24, the ongoing international conflict has dominated the headlines.

With all the uncertainty surrounding the conflict in Ukraine—from the loss of life and invasion of a sovereign country to the humanitarian crisis caused by hundreds of thousands of refugees and economic impact of strict sanctions against Russia—the Maxwell School of Citizenship and Public Affairs hosted a panel discussion and Q&A Monday, titled “What’s at Stake in Ukraine?”

The event brought together respected faculty experts who examined the repercussions of Russia’s invasion of Ukraine for an audience of nearly 200, both in person in the Dr. Paul and Natalie Strasser Legacy Room at 220 Eggers Hall, and online through Zoom. 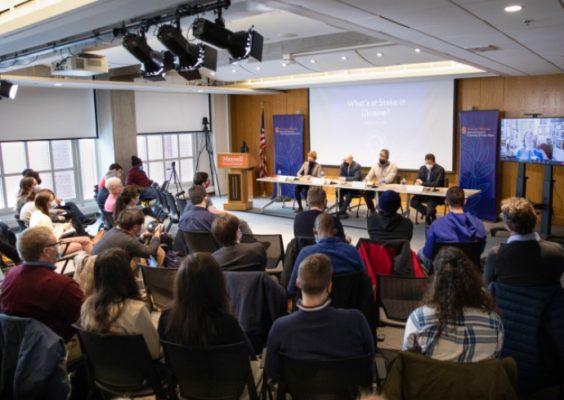 Maxwell faculty experts shared their expertise on the conflict in Ukraine during a panel discussion held on Feb. 28.

Featuring Maxwell faculty experts Brian Taylor, Michael Williams, Osamah Khalil and Catherine Bertini, panelists provided remarks on the conflict based on their areas of expertise, examining the invasion; how Russia, Ukraine, the United Nations (U.N.) and the North Atlantic Treaty Organization (NATO) could take steps toward de-escalation; and the short- and long-term implications of Russia’s aggressive actions across the world.

In discussing what is at stake for both Russia and Ukraine, Taylor, a professor of political science and the author of “The Code of Putinism,” painted a picture of who Putin is for the audience: an emotional leader, one who is enacting his decisions while remaining isolated from the people he is supposed to represent.

“This is an invasion, and the Ukrainians are fighting for their lives,” said Taylor.

Taylor then alluded to the dual threats Putin is contending with as the head of an authoritarian regime: from the established elites and from Russia’s citizens.

Taylor said the early objective of this Russian military operation was to overthrow the existing Ukrainian government, including President Volodymyr Zelenskyy, and install a pro-Putin puppet government. Putin expected the Russian military to encounter little resistance from Ukraine, but now, as Ukrainians are pushing back and fighting for their country, Taylor says he expects Putin to “use much more aggressive tactics and attacks.”

Why now for Putin to invade? Taylor said the most important factor is Ukraine’s unwillingness to fall back in line with Russia, instead opting to move further away from Russia’s ideology and align itself more with the U.N. and NATO.

“Putin is resentful about how he feels Russia was mistreated after the end of the Cold War. Putin believes that Russia deserves a status as a great power with the right to determine the domestic and foreign policy of its neighbors, including Ukraine,” said Taylor.

The European Union, along with the U.S., Britain and other countries have acted swiftly when it comes to handing down economic sanctions against Russia, including excluding big Russian banks from SWIFT, the financial messaging system responsible for executing most of the financial transactions and payments between banks worldwide.

President Joe Biden L’68 led Tuesday night’s State of the Union address discussing the situation in Ukraine. During these polarizing political times, President Biden received bipartisan support when he vowed to stand united with Ukraine’s democratically elected government, and by pledging support to the Ukrainian people.

Closer to Syracuse University, Chancellor Kent Syverud addressed the campus community on Feb. 25 over what he termed “a very significant moment” bound to have “a ripple effect throughout our community,” impacting the University’s students, faculty, staff and alumni who are from Russia and Ukraine, as well as the active-duty military members and members of the Guard or Reserves.

Williams, associate professor of public administration and international affairs and director of graduate programs in international relations, pointed out that Putin’s invasion has led to division among his own people, as more than 6,800 Russians have been arrested after participating in anti-war demonstrations.

Not only has the invasion alienated many Russian citizens, Williams says it has polarized NATO and the rest of Europe, with many of Putin’s former political allies in Europe adopting a pro-Ukrainian and pro-West stance.

“In the span of less than a week, [Putin has] managed to seemingly overturn the German consensus on military spending and peaceful policy toward Russia. He’s managed to have both Sweden and Finland, neutral countries throughout the entire Cold War, get involved and send weapons to Ukraine,” Williams said.

The Role of NATO and the Path Forward

While the economic sanctions levied against Putin and Russia have already had an impact on the Russian economy, continued sanctions could back Putin into a corner and force him into desperate measures, according to Williams. 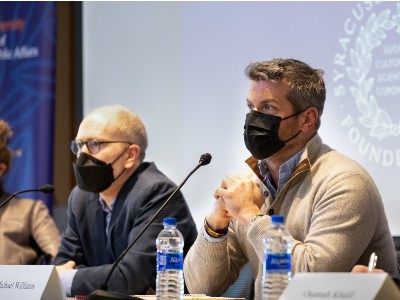 Williams said that while Putin is actively escalating the situation in Ukraine, NATO is working to preserve the alliance. NATO’s primary goal when it was founded in 1949 was to provide mutual assistance after the former Soviet Union grew in both size and scope in Europe.

One of NATO’s core tenets is Article 5, which addresses “collective defense,” meaning an attack on one NATO ally is considered an attack on all NATO allies. If Russia eventually captures Ukraine, that could lead to a full-scale conflict between Russia and NATO nations. Ukraine is not a NATO member, but it is bordered by Poland, Hungry, Slovakia and Romania, which are members.

Unlike at the end of World War II, when the U.S., England and Russia worked together to map out the post-war reorganization of both Germany and Europe, Williams doesn’t see that strategy working this time around.

“What does a compromise mean? NATO is interested in a compromise. The White House needs to find an off-ramp for Putin, and he has to want to play ball and negotiate a peace treaty. There’s no chance of a repeat of the Yalta Conference where the U.S. and Russia come together and talk over the heads of the Ukrainians. So where could Ukraine end up? Possibly with armed neutrality,” Williams said.

Khalil, associate professor of history, chair of the international relations undergraduate program and the Dr. Ralph E. Montonna Endowed Professor at Maxwell, emphasized the importance of finding middle ground and searching for compromise while reducing tensions generated by the invasion.

As it always does in matters of war, Khalil says diplomacy will play a large role moving forward, especially as the actors on the international stage seek to de-escalate the situation.

Humanitarian Crisis and the U.N.’s Role

Concerning the plight of the nearly 875,000 Ukrainians fleeing their homeland since the Russian invasion began, there is a massive humanitarian crisis caused by Putin’s actions. The leaders of Bulgaria, Poland, Romania, Hungary and Moldova have opened their borders to these refugees, while using language that Khalil said demonstrates Islamophobia.

In one highly publicized instance, Bulgarian Prime Minister Kiril Petkov spoke to journalists about the makeup of the refugees Bulgaria was seeing at its borders after watching Ukrainian refugees entering his country.

This attitude represents a stark contrast from recent instances of migrants and refugees fleeing countries in the Middle East and Africa—and in particular Syrians who fled in 2015.

“These countries want to let Ukrainians in and these refugees are being judged on their skin color. Why are Ukrainians worthy refugees compared to Syrian and Afghan refugees? … The breaking of international law is bad. The invasion of another country is awful. War is terrible. [Those factors] should be equal. We shouldn’t just pick who are worthy and who are unworthy victims,” Khalil said.

Bertini, emeritus professor of practice of public administration and international affairs and current Rockefeller Foundation fellow and Chicago Council on Global Affairs distinguished fellow, addressed the role the U.N. plays in the conflict.

While the U.N.’s involvement is limited, it can greatly assist civilians forced to relocate following the first attack on a European country since World War II.

“These U.N. organizations are working with them on not only cross-border issues but issues within the country. I think we’ll see very strong, robust U.N. humanitarian operations working out and saving lives,” said Bertini, who referenced the U.N. High Commissioner for Refugee’s role in assisting Ukrainians who are fleeing their country.

The program, which lasted for 90 minutes, featured questions from attendees. It was moderated by Margarita Estevez-Abe, associate professor of political science and co-director of the Center for European Studies at the Moynihan Institute of Global Affairs.

Department of Public Safety to Conduct a Test of the Orange Alert Campus Crisis Alert Notification System on Thursday, Feb. 9

The Department of Public Safety (DPS) will conduct a test of the Orange Alert Campus Crisis Alert Notification System on Thursday, Feb. 9, at 12:25 p.m. It will be a full test of the system which includes notifications sent via…