Syracuse Honors NCAA Division I Winningest Basketball Coach on Final Trip to the Stadium, Recognizes Fiserv CEO for Commitment to the University

It was a busy weekend filled with anticipation as Syracuse welcomed top-ranked Duke University for another historic rival matchup, along with some special pregame activities this time around. 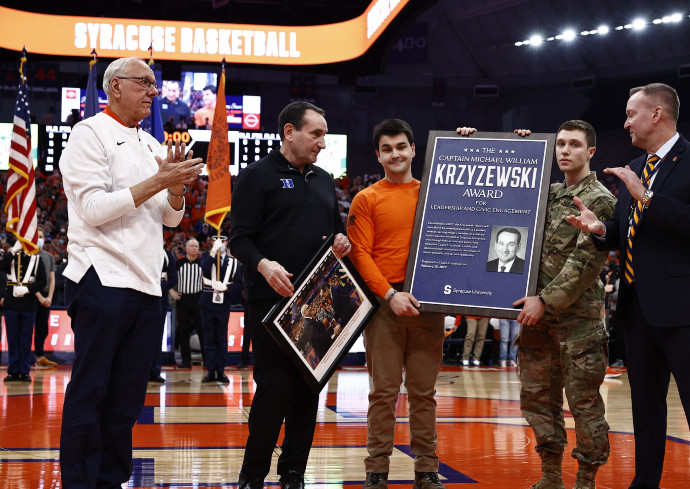 The University presented Duke University’s men’s basketball coach Mike Krzyzewski with a framed photo printed on a piece of the former Carrier Dome roof and announced the creation of a new scholarship in Krzyzewski’s name, recognizing his commitment to service and his military service.

The game was the last time that Duke’s Mike Krzyzewski would coach at the stadium against his good friend Coach Jim Boeheim. In honor of this final Syracuse meetup, Boeheim and the University presented “Coach K” with a framed photo printed on a piece of the former Carrier Dome roof and announced the creation of a new scholarship in Krzyzewski’s name, recognizing his commitment to service and his military service. Krzyzewski separated from the military in 1974 as a captain, following his graduation from West Point in 1969.

The Captain Michael William Krzyzewski Award for Leadership and Civic Engagement will now be presented annually to a Syracuse University student veteran, serving military member or a military family member enrolled here, who through their actions and aspirations embodies Krzyzewski’s public and demonstrated commitment to the virtues of honor, empathy and servant-leadership. The Krzyzewski Award honoree will be not only be an exceptional student but also a leader on the campus and in the community.

“The honor they bestowed on me today was absolutely amazing,” said Krzyzewski, who is the winningest coach in the NCAA Division I. “Wow. So, thank you, thank you. Very, very much appreciated.”

“As a former Syracuse University men’s basketball player and now a season ticket holder, it is my pleasure to step up and honor Coach K for his service in the United States Army,” says Jim. “Since my father Harold Lee, a United States Coast Guard veteran, passed away, I’ve made it a personal mission of mine to support veterans and military-connected students through my support of the University and my role on the OVMA Advisory Board.” 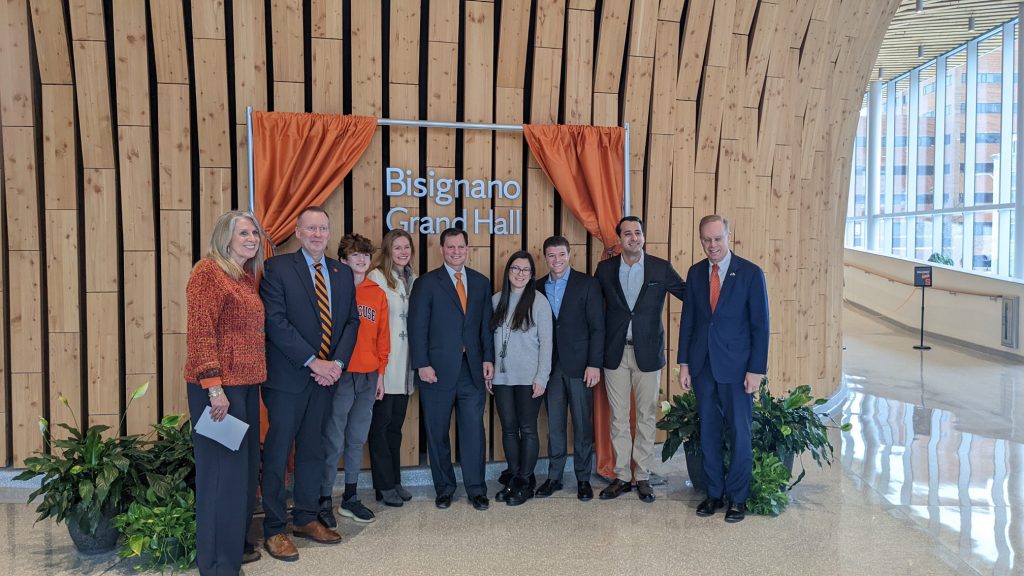 The University honored Fiserv President and CEO Frank Bisignano, along with his wife Tracy and other family members, with the unveiling of the Bisignano Grand Hall and the Bisignano Family Programs and Services Wing at the National Veterans Resource Center.

Before the game, the University honored Fiserv President and CEO and proud Syracuse parent Frank Bisignano, along with his wife Tracy and other family members, including Sam ’11 and Morgan Lituchy ’11, with the unveiling of the Bisignano Grand Hall and the Bisignano Family Programs and Services Wing at the National Veterans Resource Center (NVRC) at the Daniel and Gayle D’Aniello Building on campus.

The family was also recognized during the game with a signed game ball, presented by Chancellor Kent Syverud, Vice Chancellor J. Michael Haynie, Director of Athletics John Wildhack, Senior Deputy Athletics Director Herm Frazier and Chief Advancement Officer Matt Ter Molen. The recognition is an expression of gratitude to Bisignano for his personal support and the corporate commitment of Fiserv to the University’s D’Aniello Institute for Veterans and Military Families (IVMF), as well as the NVRC. Their latest giving totals more than $10 million.

“On behalf of Syracuse University, we are grateful to Frank for his leadership and dedication to veterans and military communities,” says Chancellor Kent Syverud. “He has spent his lifetime supporting veterans and the military, both philanthropically and personally. His generosity has had a transformative impact at Syracuse University, among veterans and on our whole country. His support of programming for veterans to develop as leaders and entrepreneurs provides the knowledge and critical thinking skills they need to succeed.”

“I had the good fortune to meet Frank Bisignano back in 2010, when a few of us on campus were just beginning to think about the opportunity to create an academic institute at Syracuse University, focused on the economic and wellness issues impacting veterans and military-connected families” says Vice Chancellor Haynie. “When I had the chance to pitch the idea to Frank, he did not hesitate. He said, ‘let me help you make this institute a reality.’ Fast forward 10 years later, the IVMF’s programs have directly impacted more than 170,000 veterans and military family members, and Syracuse University is nationally acknowledged as a leader in research, policy and programs aligned with the military-connected community. I’m grateful to Frank and his family for their personal commitment to those who have served, and to Fiserv for the firm’s extraordinary efforts to empower veterans and military spouses through the IVMF’s business ownership training programs.” 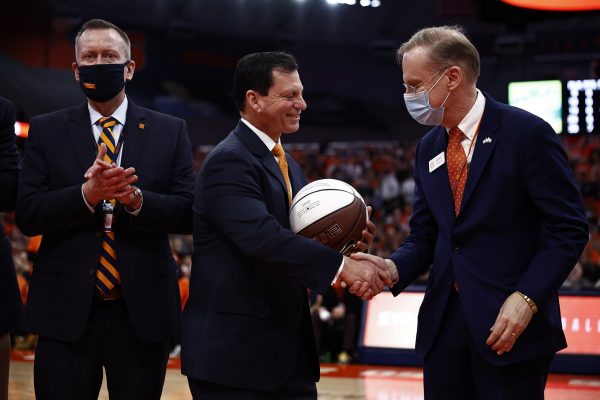 Frank Bisignano, center, was recognized at the men’s basketball game Saturday for his personal support and the corporate commitment of Fiserv to the University’s D’Aniello Institute for Veterans and Military Families, as well as the National Veterans Resource Center.

“My family and I are proud to be part of the Syracuse University community and are honored to contribute to the advancement of the D’Aniello Institute for Veterans and Military Families and the new National Veterans Resource Center,” says Bisignano. “Being an advocate for the military community and ensuring they have the best opportunities to achieve success is incredibly important to me personally and is also reflected in the Fiserv values and the company’s steadfast commitment to the military and veteran community.”