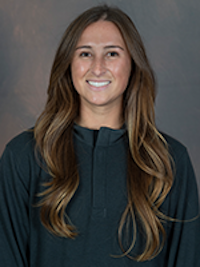 Ella Simkins ’20, G’21 had big plans for the 2020 women’s lacrosse season. A standout defender, in her junior year she had started all 21 games, recorded career highs in caused turnovers and draw controls, and ranked third on the team in caused turnovers, all during a 16-5 season for the Orange.

However, the coronavirus pandemic canceled Simkins’ senior season after just eight games, the call coming while the Orange were having a pre-game meal before its March 12 match-up against the Cavaliers in Charlottesville, Virginia.

After this disappointment, Simkins, like other Orange student-athletes, was offered a fifth year of eligibility for 2020-21. Having already received her undergraduate degree, in order to return she needed to join a graduate program. The path she chose—through the School of Education’s Certificate of Advanced Study in Intercollegiate Athletic Advising and Support (CAS in IAAS), which was re-imagined in 2021 and became a popular option for fifth-year athletes—has set Simkins on her coaching career path.

“Through our CAS courses, and especially in mine, I saw Ella as this budding gem who I believed would be an incredible coach,” says Professor Cathy Engstrom, chair of the Department of Higher Education. “Ella thrived in classes and also on the lacrosse field, becoming a 2021 All-American. In all my years of teaching and amazing student growth, her transformation was one of the most rewarding.”

Now an assistant coach for the Army West Point Black Knights, as well as a member of the Athletes Unlimited Pro Lacrosse League, we caught up with Simkins to learn about her experience in the CAS in IAAS program and how it has helped her to navigate her first year at Army Lax.