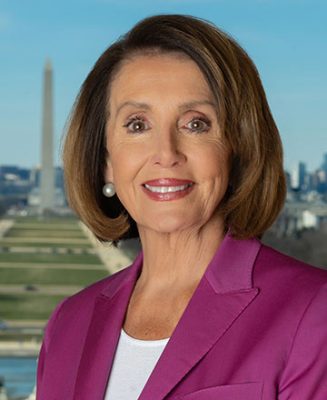 The Honorable Nancy Pelosi, 52nd Speaker of the U.S. House of Representatives, will be the featured guest at the virtual ceremony honoring the winners of the 2022 Toner Prizes for Excellence in Political Reporting. She will discuss the state of the nation and the world in an interview with Karen Tumulty of The Washington Post. The prerecorded ceremony will be available for viewing March 28 starting at 7 p.m. ET. To register, visit cc.syr.edu/toner-prizes-2022.

The Toner Prizes, sponsored by the S.I. Newhouse School of Public Communications, honor the life and work of late alumna Robin Toner ’76, the first woman to be national political correspondent for The New York Times. Prizes will be presented for local and national reporting. Chancellor Kent Syverud and Dean Mark J. Lodato will also offer remarks.

Pelosi made history in 2007 when she was elected the first woman to serve as Speaker of the House.

Now in her fourth term as Speaker, Pelosi made history again in January 2019 when she regained her position second-in-line to the presidency, the first person to do so in more than 60 years. Pelosi has represented San Francisco, California’s 12th District, for 34 years. She previously served as House Democratic Whip.

Under Pelosi’s leadership, the 111th Congress was heralded as “one of the most productive Congresses in history” by Congressional scholar Norman Ornstein. The Christian Science Monitor described her as “the most powerful woman in American politics and the most powerful House Speaker since Sam Rayburn a half century ago.”

Pelosi was the architect of the landmark Affordable Care Act and has been instrumental in key legislation such as the American Recovery and Reinvestment Act, American Clean Energy and Security Act, Lilly Ledbetter Fair Pay and the repeal of the “Don’t Ask, Don’t Tell” policy.

Last year’s national prize went to David A. Graham of The Atlantic, and the local prize to a team from LehighValleyLive.com. Other past awardees include teams of reporters from the Boston Globe and WBEZ in Chicago, Jason Zengerle of The New York Times Magazine and GQ, David Fahrenthold of The Washington Post, Alec MacGillis of ProPublica and Jane Mayer of The New Yorker, among others.

Toner graduated from Syracuse with dual degrees in journalism and political science. She started her journalism career with The Charleston Daily Mail in West Virginia and reported for The Atlanta Journal-Constitution before arriving at The New York Times in 1985. She covered five presidential campaigns, scores of congressional and gubernatorial races and most of the country’s major political and policy issues.

Following Toner’s death in 2008, her family, friends and classmates created the Robin Toner Program in Political Reporting at the Newhouse School to honor her life and work.

To register for the virtual event, visit cc.syr.edu/toner-prizes-2022. If you have questions or require accommodations, contact Amanda Griffin at algri100@syr.edu.