Leaving dust in their wake, the young Afghan women set out for a miles-long run along a trail riddled with rocks and, every so often, a spent bullet.

The casings and an occasional rusted Soviet tank served as reminders of their country’s history of war. The women embodied its resilience.

Just a generation before, under the Taliban, they would have faced punishment, even death, for exercising in public. Women were forbidden to participate in sports or leave home without a male escort.

This fact was not lost on the women who ran together at dawn.

Nor was it lost on Adriana Curto. She is among alumni who have lived, worked or served in Afghanistan as soldiers, diplomats, humanitarians, attorneys and educators who share in anger and despair following the summer’s withdrawal of U.S. troops and subsequent Taliban coup.

From January to June 2021, Curto served as the Afghanistan country manager for Free to Run, a nonprofit that empowers Afghan women to participate in sports such as running to reclaim public spaces and to reconsider the roles they can—and should—have in society.

“These girls are experiencing so much trauma,” says Curto, who earned a degree in international relations and citizenship and civic engagement in 2016. “It is so unfair.   I can’t help but think about what it must be like for them.”

Taliban leaders tried to assuage fears with claims they would rule with fewer restrictions. Yet, days after they claimed the capital, Kabul, The Ministry of Women’s Affairs—a building Curto drove past most every day—was turned into a headquarters for the Taliban’s ministry for the “propagation of virtue and prevention of vice.”

Adriana Curto heard about Free to Run through a friend who had worked for the organization in Iraq. She developed an interest in sports as a pathway to empowerment while serving with the Peace Corps in Morocco.

During her two years of service, she helped develop programming for an outdoor youth leadership program. “It sounded incredible,” she says of the Free to Run opportunity. “I didn’t know much about Afghanistan, but I learned so much being there. It is an incredibly complex place.” 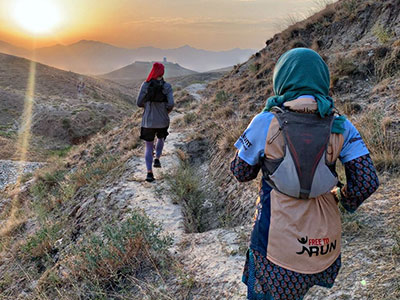 Most impressive were the young women. “In the news we never see the newer generation in Afghanistan—girls who are 15, 16, 17—who have grown up in this post- Taliban era and have worked to fight for a lot of different freedoms,” says Curto.

While times had changed since the Taliban fell in 2002, running was still not without risks for Free to Run participants. Yet, they persisted, waking up to board an unmarked van at 4:45 a.m. destined for a gated compound where they could safely run before school.

On weekends, they traveled further for long runs that took them past the spent bullets toward the mountains of the Hindu Kush. “It was really special and exciting for them to be able to do this,” says Curto.

Last spring, Curto sensed worry among the young women. They heard reports of the pending American troop withdrawal and murmurs at home about the potential for the Taliban’s return to power.

“They grew up hearing their parents talk about the days of the Taliban and a lack of women’s rights and education,” she says.

Two months after Curto returned home to New York, she watched news reports showing thousands of Afghans crowding the Kabul airport in hopes of evacuation. She learned that many of the women she knew made it out and are scattered across the globe as refugees. One of the former runners is a Fulbright scholar who arrived in the U.S. but told Curto she “can’t focus” on anything because she is consumed with worry for her family left behind.

“I can’t put into words how heartbreaking these past few months have been for our Afghan colleagues and friends,” says Curto.

Maxwell alumni Akbar Quraishi and Amy Friers know the heartache. From their home in Troy, New York, the husband and wife have kept tabs on their long list of relatives, friends and colleagues in Afghanistan.

Following the troop withdrawal, they heard pleas from those fearing they would be targets of the Taliban. Friers belongs to the Association of Wartime Allies and was asked by the organization to compile a list of those in need of evacuation.

She and Quraishi got to work, helping coordinate Afghans’ safe passage throughout the country and access to the airport. Thousands reached out for help. “We spent almost every minute of every day reaching out to try to find our people,” says Friers, who earned a bachelor’s degree in political science in 2011 and a master’s degree in international relations in 2017. “We barely slept, barely ate.”

Quraishi, an Afghan, joined the government following the Taliban’s collapse in 2002. Under constant threat, he worked in various high-level government positions before going to Maxwell for bachelor’s and master’s degrees in international relations, in 2009 and 2011, respectively.

He tutored his future wife, Friers, in Farsi. The couple moved to Kabul, and with the help of a few friends and Quraishi’s colleagues, opened the country’s first specialized international relations university.

“There was a huge, huge push for education,” says Friers. “Everyone wanted a degree.”

After five years, Friers returned to the states with their three-month-old twins and resumed her studies at Maxwell as a graduate student. Quraishi later joined her and went to work as a diplomat at the Afghan Embassy in Washington, D.C. The couple continued to help oversee the university from afar. Friers also signed on with nonprofits like Team Afghan Power, an organization that brings electricity, internet and educational programming to rural schools. By early summer, a sense of urgency prevailed.

“Everyone was nervous,” says Friers. “Everyone thought something was going to go bad.  We were trying to stay optimistic.  When everything started falling to the Taliban, we thought, ‘It’s ok, there’s a plan.  They are going to protect the capital.’  We were not prepared for how quickly Kabul fell to the Taliban.”

After several agonizing weeks, the couple got word that their university had survived, though it was open in a reduced capacity, without female students. Their efforts to help in the evacuation continued into the fall.

At times, their work felt futile, yet it was not in vain:  They managed to get some out, including the first woman to enroll at the university.

Amid her work to help Afghans—including a nephew briefly captured by Taliban fighters—Amy Friers reached out to a fellow Maxwell graduate experienced in navigating the special immigration visa (SIV) process.

Army veteran and former CIA analyst Matt Zeller, who received master’s degrees in public administration and international relations in 2006, offered guidance during his own ’round-the-clock work to help Afghan allies. In a Washington, D.C., office suite, he spent the late summer directing a team of volunteers for an organization he co-founded with the Afghan interpreter who saved his life.

No One Left Behind advocates for the well-being and the safe placement of Afghan and Iraqi natives who worked as translators with U.S. troops. Using phones, laptops, flowcharts and diagrams, Zeller and volunteers kept track of those who were hiding in safe houses or trying to board evacuation planes.

On Aug. 15—the day Kabul fell to the Taliban—Zeller was keeping track of roughly 86,000 interpreters and family members seeking evacuation. A month later, he learned that 1,800 made it out. With the troops and U.S. diplomats departed, the evacuation effort continued through a largely underground network of humanitarians and organizations.

“We all just put our lives on hold,” says Zeller. He was joined by many other Afghanistan veterans in helping with the evacuation of Afghan allies while airing frustration with the White House’s handling of the withdrawal on major networks like CNN and MSNBC. 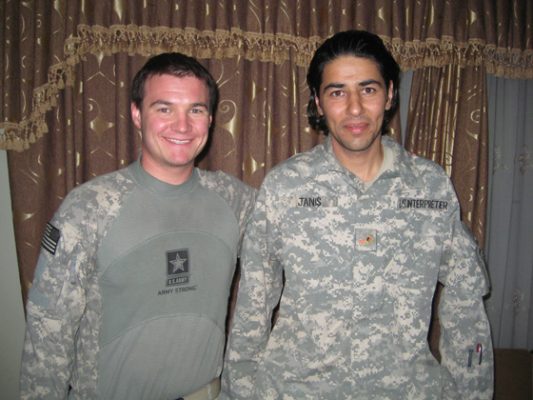 Years earlier, Zeller launched a media campaign to rally support to convince the U.S. Embassy in Kabul to grant a visa to the interpreter who saved his life on the battlefield 13 years ago, Janis Shinwari.

Shinwari fought off Zeller’s attackers just a few days after they were introduced, when Zeller began his tour as embedded combat advisor to the Afghan National Army and Police in Ghanzi Province. The act of heroism had an indelible impact on Zeller, who comes from a long line of military officers and enlisted after 9/11.

“I told him, ‘I don’t even know why you did it, man. Why did you save my life?” recalls Zeller. “He said, ‘You’re a guest in our country, I take a bullet before you.’”

For the remainder of Zeller’s tour, the pair forged a deep friendship over cups of chai and the constant threat to their lives. “If you served in Afghanistan, you return with a part of its soul in your blood,” says Zeller. “I feel a profound obligation to take care of these people because they are my brothers and sisters.”

This is an excerpt from a story that first appeared in Maxwell Perspective. Visit the Maxwell School’s News site for the full story.