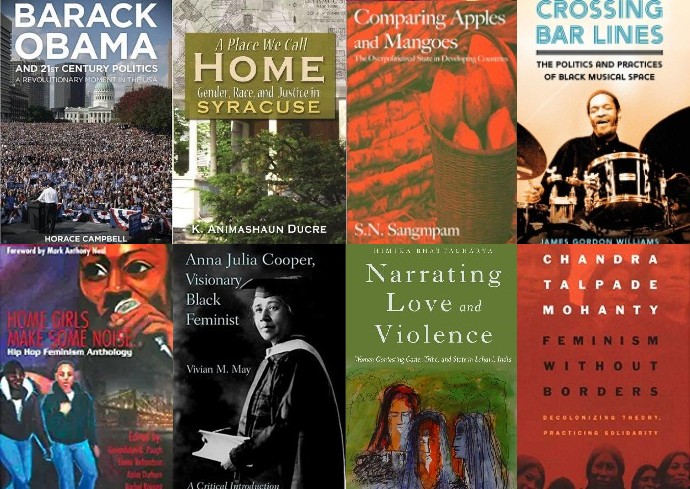 Faculty members in the departments of Women’s and Gender Studies and African American Studies in the College of Arts and Sciences have authored or edited books on a diverse range of scholarly topics relevant to their fields of study. Their publications are dynamic explorations of individuals, topics and issues relevant to historically underrepresented and marginalized peoples in the United States and around the world. As the University celebrates Black History Month and Women’s History Month (beginning March 1), we rounded up a sampling of works from faculty who have made the historical, social, political, economic and cultural study of these often-intersecting identities the focus of their scholarship.

“Barack Obama and Twenty-First-Century Politics: A Revolutionary Moment in the USA”

Former President Barack Obama has been called a transformative and transcendental figure. In “Barack Obama and Twenty-First-Century Politics: A Revolutionary Moment in the USA,” Horace Campbell, professor of African American studies and director of the Africa Initiative, shows just how significant the movement behind Obama was for the politics of the U.S. Campbell examines the networks that made the electoral victory possible and discusses the importance of self-organization and self-emancipation in politics. Situated in the context of the agency of new social forces galvanized in the 2008 electoral season, the book develops a theory of politics that starts with the humanist principles of ubuntu, healing and reparations for the 21st century.

“A Place We Call Home: Gender, Race, and Justice in Syracuse”

“A Place We Call Home: Gender, Race, and Justice in Syracuse” by Kishi Ducre, associate dean of diversity, equity and inclusion and associate professor of African American studies, chronicles a photography project by 14 women living on Syracuse’s South Side, a predominantly African American and low-income area. The women photographed their environment and displayed the images to facilitate dialogues about how they viewed their community. The book bears witness not only to the environmental injustice experienced by these women, but also to the ways in which they maintain dignity and restore order in a community where they have traditionally had little control. To understand the plight of these women, one must understand the historical and political context in which certain urban neighborhoods were formed: Black migration, urban renewal, white flight, capital expansion and then bust. Ducre demonstrates how such political and economic forces created a landscape of abandoned housing within the Southside community and spotlights the impact of this blight upon the female residents who survive in this crucible of neglect.

“Comparing Apples and Mangoes: The Overpoliticized State in Developing Countries”

Two competing approaches currently dominate the debate about the state and institutions in developing countries. The first projects a picture of transnational, vertical uniformity descending from the West to developing countries and views liberal democracy as “the only game in town.” In this view, the state and institutions resemble or ought to resemble those in the West. The second, by contrast, explains political outcomes by local idiosyncrasies and regional variations in institutions. In “Comparing Apples and Mangoes: The Overpoliticized State in Developing Countries,” S.N. Sangmpam, professor of African American studies, takes an original approach to third world politics, challenging both dominant views by uncovering important similarities in the political features of developing countries.

In “Crossing Bar Lines: The Politics and Practices of Black Musical Space,” James Gordon Williams, associate professor of African American studies and art and music histories, reframes the nature and purpose of jazz improvisation to illuminate the cultural work being done by five creative musicians between 2005-19. The political thought of five African American improvisers—trumpeters Terence Blanchard and Ambrose Akinmusire, drummers Billy Higgins and Terri Lyne Carrington, and pianist Andrew Hill—is documented through insightful, multilayered case studies that make explicit how these musicians articulate their position in broader society. Informed by Black feminist thought, these case studies unite around the theory of Black musical space that comes from the lived experiences of African Americans as they improvise through daily life.

Gwendolyn Pough, Dean’s Professor of the Humanities in women’s and gender studies, is an editor of “Home Girls Make Some Noise: Hip Hop Feminist Anthology,” an anthology that seeks to complicate understandings of hip-hop as a male space by including and identifying the women who were always involved with the culture. The book—which includes critical essays, cultural critiques, interviews, personal narratives, fiction, poetry and artwork—explores hip-hop as a worldview, an epistemology grounded in the experiences of communities of color under advanced capitalism and a cultural site for rearticulating identity and sexual politics.

Vivian May, professor of women’s and gender studies, explores the theoretical and political contributions of Anna Julia Cooper, a renowned Black feminist scholar, educator and activist whose ideas deserve far more attention than they have received. Drawing on Africana and feminist theory, May places Cooper’s theorizing in its historical contexts and offers new ways to interpret the evolution of Cooper’s visionary politics, subversive methodology and defiant philosophical outlook. Rejecting notions that Cooper was an elitist duped by dominant ideologies, May contends that Cooper’s ambiguity, code-switching and irony should be understood as strategies of a radical methodology of dissent.

In “Narrating Love and Violence,” Himika Bhattacharya, associate professor and chair of women’s and gender studies, explores women’s stories from the Himalayan valley of Lahaul in the region of Himachal Pradesh, India, focusing on how both love and violence emerge (or function) at the intersection of gender, tribe, caste and the state in India. Bhattacharya privileges the everyday lives of women marginalized by caste and tribe to show how state and community discourses about gendered violence serve as proxy for caste in India, thus not only upholding these social hierarchies, but also enabling violence. The women featured tell their stories through love, articulated as rejection, redefinition and reproduction of notions of violence and solidarity. Bhattacharya centers their narratives as a site of knowledge—beyond love and beyond violence—showing how women on the margins of tribe and caste know both, love and violence, as agents wishing to re-shape discourses of caste, tribe and community.

Chandra Talpade Mohanty, Distinguished Professor of women’s and gender studies, brings together classic and new writings in “Feminism Without Borders: Decolonizing Theory, Practicing Solidarity.” The book addresses some of the most pressing and complex issues facing contemporary feminism and highlights the concerns running throughout Mohanty’s pioneering work: the politics of difference and solidarity, decolonizing and democratizing feminist practice, the crossing of borders, and the relation of feminist knowledge and scholarship to organizing and social movements.