Sharon Otasowie L’21 is a proud College of Law alumna. Her experience as an Air Force ROTC JAG (Judge Advocate General Corps) cadet at the University prepared her well for her first assignment as an Air Force JAG officer. 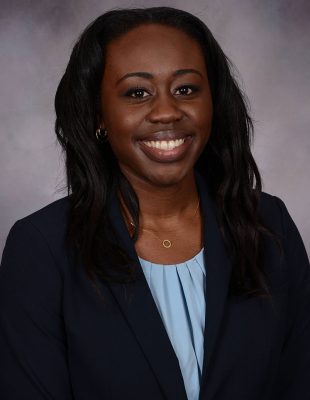 Now stationed at Cannon Air Force Base in New Mexico, Otasowie was born in Nigeria and raised in southern California. She appreciates how the College of Law was people-oriented and didn’t foster an overcompetitive culture.

“At Syracuse, everybody wanted to be there to help you,” she says. “Professors were so approachable and helpful, and I was getting the best I could to succeed.”

Otasowie was already heading for the College of Law before applying to the JAG program. As part of the application process, Otasowie was asked why she was sure she wanted to join the military. Even though she had family members in the Army and Navy, she only considered the Air Force and was drawn to all of it.

“When I looked into it, I could see the Air Force have a high standard for themselves,” she says. “It’s about our mission and making sure that our people are good. I really love helping people.”

Otasowie had a positive military-connected student experience at the College of Law, rooted in the spirit of community and collaboration. She’s grateful she had the opportunity to participate in ROTC, because rather than getting a full immersion, Otosowie could do a little bit at a time. She didn’t have the pressure to have to get it all right at once.

“It was a lot like drinking water from a fire hose, but only for a few hours each week, and I always felt supported,” she says.

She credits an incredibly encouraging team with helping her learn how to do the military part of her job. Otasowie had to learn in two years what most cadets cover in four. Major David Stebbins, operations flight commander and recruiting flight commander, Air Force Reserve Officer Training Corps (AFROTC), Tami Johnson, Ph.D., assistant professor, and Lt. Col. Tim Kimbrough, former head of the Air Force ROTC at Syracuse University, all helped her get acclimated and caught up. They covered everything from how to salute and wear a uniform to knowing all the movements.

“I feel like I did not know a thing about the military. I couldn’t salute. I didn’t even know what the rank system was,” she says. “They were all there to help me figure out how to be an officer and they all wanted me to succeed.”

Now that she’s had some time to put her academic and military lessons to use outside the classroom, Otasowie continues to experience support, collaboration and kindness as a first lieutenant at Cannon Air Force Base. She feels like she’s part of a familial community where people really do care and want her to do well. She’s still learning in an environment where people see each other as colleagues instead of competition, and nobody is trying to tear anybody down.

“Everyone I’ve met in the Air Force is genuinely kind. They’re all normal people, it’s not all, ‘yes sir, no sir.’ Instead, it’s, ‘what do you think,’ and ‘how can we help you?’” she says. “I love it every single day. I’m genuinely excited every day because there’s always something different and the work matters.”

For example, she recently asked a colonel if she had a few minutes for some questions, and ended up talking with her for a few hours. What’s more, she connected her to other information and resources that would continue to be helpful. She emailed a base in Japan to ask about a document they created and, instead of giving her extra hurdles to clear, they took the time to help her track it down.

Otasowie continues to pay that collegial spirit back to the College of Law and her AFROTC classmates. She keeps in touch to offer encouragement, as she knows that they’re learning about upcoming assignments soon, which can be stressful. She’s also glad to share some assurance and perspective she gained since graduation: “Everybody says it’s what you make of it, and it’s so true.”