Life is full of points at which you can choose to take one path or another. Either way, you’ll be set in a very different direction. For many people, these crossroads can be full of trepidation or regret. For Jasmeane Brock L’24, key decision points have been opportunities to set a dedicated path and not look back. 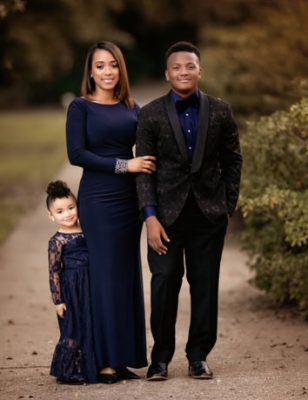 Taking this steadfast approach to decision making is how Brock found her way to the College of Law’s JDinteractive (JDi) program. It’s also how she decided to join the Army. Together, Brock’s confident choices are adding up to a consistent purpose.

Growing up as a military child in Louisiana, Brock experienced the military as a foundation that opened the door for her family to live a relatively comfortable life. Her father served in the Army, and she also has many family members with military service. Though she wanted to serve in the Army—and was always very specific about it being the Army—and further her education, Brock wasn’t quite ready to join right after high school. Instead, she earned an undergraduate degree at Louisiana State University in 2008.

Still, the prospect of joining the Army stayed with her.

Brock felt unfulfilled and didn’t have a plan about what she wanted to do with her sociology degree. She believed that the Army could give her more direction and create new opportunities. She also wanted a better life for her son, who was four years old.

“I thought, I’m either going to do it now or I’m going to move on and not worry about it,” she says. “I knew I wanted to go, and I knew it would be better.”

That’s when Brock learned about some little-known policies that most military branches have about single parents who want to serve. She had to navigate and overcome a set of legal hurdles to stay in after completing her initial training. She also learned that the policies aren’t always clear or equally applied, which often creates a disparate impact on women.

“Until I experienced it, I had no idea,” she says.

Brock returned to LSU to get her master of public administration degree and joined the Army Reserve as a logistics officer. She used the opportunity to start research about the issue she and other women service members have experienced as part of an independent study. She also earned a prestigious Presidential Management Fellowship, which led her to work as an equal opportunity specialist in the Office of Fair Housing and Equal Opportunity at the United States Department of Housing and Urban Development (HUD) in Houston, Texas, while continuing her service in the Army Reserve.

Brock wanted to pursue even more education and set her sights on law. With a five-year-old daughter, she also needed something that would fit with her busy life.

“I made the decision about law school at Syracuse the same way I did about joining the Army,” she says. “I was either going to go for law school or not, and either way I would be ok with it.”

Since starting her JDi, Brock has enjoyed advancing her initial research on policies that can one day help other military service members. She’s worked with Beth Kubala, teaching professor and executive director of the Betty and Michael D. Wohl Veterans Legal Clinic in the College of Law, and Suzette Melendez, the College of Law’s associate dean of equity and inclusion.

“I absolutely love Syracuse and feel very lucky to have stumbled across this,” Brock says. “I feel supported in all aspects of my education, I have an abundance of personal resources available, my education is very individualized with supporting staff and professors and it fits perfectly with my being a professional.”

Through many decision points, Brock has landed in the right place and continuing on path.

“It’s never too late to go for what you want. If not achieving a certain goal continues to bother you, it must be for a reason. However, at some point a decision must be made,” she says. “You can either choose to go for it, or choose not to and be ok with this decision and move forward. Either is an acceptable path.”