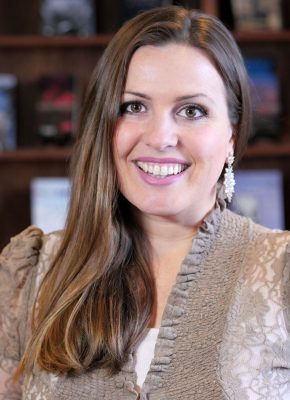 Lauren McCormick is finishing her doctoral dissertation in religion, but the path to her fundamental reinterpretation of an ancient Judean artifact draws on a broad base of multidisciplinary expertise that she has acquired over the course of her intellectual journey. Talking to her takes you on a journey through biblical history, ancient languages, archaeology, museum work, cultural studies and art history. On this journey, McCormick has found evidence to reassess the religious and cultural significance of nude female figurines, called Judean Pillar Figurines, which date back to the 8th-6th centuries BCE.

Judean Pillar Figurines are a specific form of female representation found in the kingdom of Judah (now within modern Israel) during the Iron Age. Over a thousand of the clay figurines have been found whole or in fragments. “These items are real material evidence from the biblical world, but they’re not deemed to be part of official religion as outlined in the Hebrew Bible. If you dig at almost any given site from this era in Judah, these figurines show up. More than a thousand of them have been found—well above the totals for any other kind of figural art,” she said. McCormick was fascinated by the disconnect between the sheer numbers of Judean Pillar Figurines that have been found and their absence from these key texts.

“The conventional wisdom was that the figurines represented fertility goddesses. A concern with fertility has some merit, given the high infant and maternal mortality rates in the Iron Age, the figurines’ partial nudity and the fact that they were found mostly in homes. But the evidence I have pieced together suggests that they didn’t represent high goddesses, but instead are ‘attendant figures’ like angels—intermediaries between the Hebrew god Yahweh and humans.”

McCormick’s evidence comes from multiple disciplines. With an undergraduate degree in psychology and religion from Rutgers, she went on to complete an M.A. in religious studies at New York University, where she learned the ancient Semitic languages of Hebrew, Akkadian and Biblical Aramaic. She earned a second M.A. at Duke University, where she added an additional language related to ancient Canaan called Ugaritic and participated in a half-season of archaeological excavation of Iron Age Tel Dor in Israel. McCormick has been able to bring together and expand upon her multiple skillsets working with James Watts, Zachary Braiterman and Virginia Burrus in the religion department. In the course of her Ph.D. program, she also became a visiting scholar at the Metropolitan Museum of Art, Penn Museum and the Badè Museum of Biblical Archaeology.

The quick assumption that these figurines represent fertility goddesses, McCormick notes, is based on their pose—holding nude breasts—which is an ancient gesture at-times utilized for representations of goddesses. However, the Judean Pillar Figurines do not display the typical regalia expected of a goddess, like wings or a horned cap, leaving their iconography quite ambiguous. “Angels are defined by the jobs they perform and are not mentioned by name in the Bible until the Book of Daniel, unquestionably one of the latest books of the Hebrew Bible,” she says. “This is the type of conceptualization that seems to suit Judean Pillar Figurines, which are not given individualized identity and are defined instead by the jobs they do.” 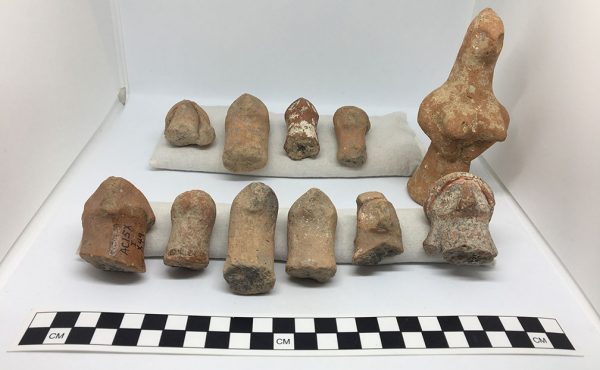 McCormick has examined over 100 figurines and fragments. She collaborated with a research scientist to find that the clay used to create the majority of figurines sampled from a site called Tell en-Naṣbeh were not sourced locally, but from the Jerusalem area. For a current article in a book she is co-editing, McCormick reconstructs faded paint on one exceptional figurine head through a technology called “Decorrelation Stretch” imaging. Through the support of the religion department, the same figurine head is scheduled for more detailed testing in March. This “Reflectance Transformation Imaging” will flash lights from controlled angles while taking pictures to reveal surface details not visible to the naked eye.

On this figurine head, red paint is preserved on the face and black and white color animate the eyes, which run the length of the face. McCormick also discovered an indentation from a bead in the eyes that would reflect light. She hadn’t found any discussion of this particular detail by other scholars, or in general any theorization of the Judean Pillar Figurines that treated the eyes as if they were as important as the breasts.

With additional information from this analysis, McCormick will be able to work at the level of fine detail as she investigates the significance of the red face and shining, oversized eyes. “In the Hebrew Bible and other ancient Near Eastern literature, we find the idea that ‘looks can kill’ when it comes to divine encounter. The concept of Yahweh as too bright or awesome to look upon is common. Individuals who stand before divine presence fear death, but, particularly in the Psalms, if they are able instead to receive blessing, their eyes start to shine. When Moses came down from the mountain with the Ten Commandments, his face was described as shining.” So might other intermediaries between God and the ancient inhabitants of Judah, like the pillar figurines, who McCormick argues were figures allowed to stand before Yahweh to see him. “In this culture, the ability to look in some capacity at the face of God was reserved for special people such as priests and prophets—also intermediaries. There’s a concept in Akkadian literature of gods with shining cloaks, which finds eventual echo in Christian traditions about saints, who are depicted with halos.”

By putting together disparate expertise from religion, art history, ancient languages and texts, archaeology and the science that is allowing a re-evaluation of surface decoration on Judean Pillar Figures, McCormick is marshaling a persuasive suite of evidence that may lead to a new interpretation of the role of these ancient artifacts in Judean religion at a time when monotheism was just beginning to emerge.