Born into poverty in Guyana, a country roughly the size of Idaho in the northeastern corner of South America, Jaipaul Roopnarine had to contend with hunger, neighborhood violence and other adverse early childhood experiences.

As a way of escaping this environment, Roopnarine and his friends used their imaginations to transport themselves to more promising places.

“We played in backyards, open fields, trees, near streams—any green space we could find,” he says. “They were joyful experiences that fostered a sense of resilience in us and permitted reprieve from the challenges of the immediate present.” 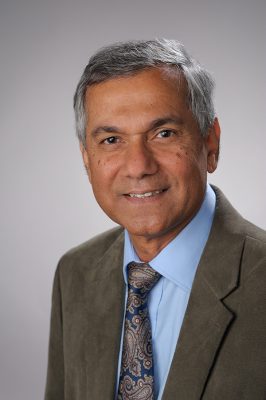 Roopnarine, the Pearl S. Falk Professor of Human Development and Family Science at Falk College, says he never fully appreciated the impact of play on his emotional survival during childhood until he took a graduate course on play and development at the University of Wisconsin with Professor James Johnson, who is now at Pennsylvania State University.

“During Professor Johnson’s lectures, I started to reflect on those childhood experiences in Guyana and began thinking of ways I could get involved in research on play,” says Roopnarine, who now specializes in father-child relationships. “I wanted to explore firsthand how children benefit from play emotionally and cognitively.”

That class for Roopnarine started a lifelong friendship and working relationship with Johnson. Over the years they have designed classroom programs for children; conducted studies on the value of play for childhood development; published books on play and early education; presented at national and international conferences; and developed an annual symposium on play that started more than a decade ago and is a joint venture among Syracuse University, Pennsylvania State University and Bloomsburg University.

In 2020, the universities expanded the conference to include participants from several Caribbean Universities and share knowledge systems with colleagues from low- and middle-income countries in the global south. And in November 2021, the universities joined forces with the University of Guyana and the Ministry of Education in Guyana for a symposium that focused on play and early education and was held to celebrate the 45th anniversary of Guyana’s National Early Childhood Education Program.

To learn more about the symposium and the importance of play for childhood development, we asked Roopnarine questions that he answers for us here:

Q: The theme of the November conference was “SPICES of Play,” with SPICES an acronym for children’s Social, Physical, Intellectual, Creative, Emotional and Spiritual development. Why that theme and why was it particularly important to focus on Guyana and other Caribbean countries?

A: Research shows that early childhood education across Caribbean countries is academically laced. Parents and early childhood teachers alike have early developmental expectations of children that are unrealistic and developmentally inappropriate. In other words, they tend to press children to learn academic skills (alphabet, spelling words, early math skills) early though rote memory. This can increase anxiety in children.

(The opening session of the symposium is available on the Guyana Ministry of Education website.)

Q: Can you describe the benefits of child-child play for children’s cognitive and social development?

A: Child-child play allows children to take on the perspective of others—put themselves in other’s shoes, if you will–and learn how to cooperate and build friendships. By getting into deeper play activities, children sharpen emerging skills such as planning, making inferences, drawing on memory and using divergent thinking. Through the facilitative role of parents and teachers, children learn to consolidate cognitive skills. 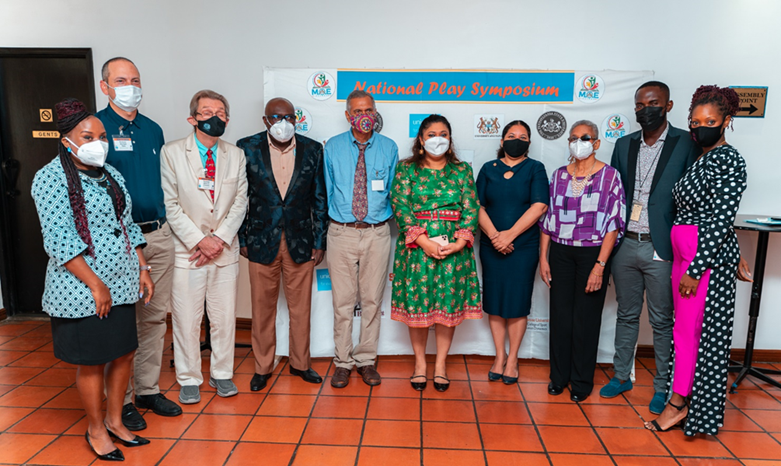 Jaipaul Roopnarine (fifth from left) and his colleagues stand for a group photo at their annual symposium on play in November that was hosted by the University of Guyana and the Ministry of Education in Guyana.

Q: At the symposium you discussed what you called an “ignored issue”–the link between mother-child/father-child play and children’s early literacy and social skills. Can you explain this link and why it’s ignored?

A: In low- and middle-income countries, play is seen as frivolous. Thus, mothers and fathers believe that children play naturally, so why engage in play with them? Their ethno-theories about early development and learning are rooted in the principle that acquiring academic skills in the early childhood years would give children the edge in displaying academic prowess later.

Data from Barbados, Belize, Dominican Republic, Guyana, Jamaica and Suriname (11,473 families with preschool-aged children) and 25 African countries (90,397 families with preschool-age children) point to associations between diverse early parent-child activities (storytelling, reading to, and playing with) and children’s early literacy (identifying letters, recognizing symbols) and social skills (getting along with others, following directions). I wanted to drive the point home about the importance of early mother-child and father-child cognitive and social engagement for the acquisition of early cognitive and social skills.

Q: Your research has focused Guyana and other Caribbean countries. Are these issues as prevalent in the U.S. and other countries?

A: Yes, play is a universal activity of childhood. Its ubiquity is mirrored in children’s and caregiver-child activities across cultural communities. Play has long been emphasized as a central component of early childhood education in high-income countries.

Q: What recommendations would you give parents or future parents regarding their child’s play?

A: Play with your children in developmentally appropriate ways; get down at the child’s level by providing materials for them and opportunities for long-term projects and authentic activities (for example, making signs for a grocery store). Play offers many opportunities to sharpen cognitive and social skills.

Jaipaul Roopnarine is the Pearl S. Falk Professor of Human Development and Family Science at Falk College; Professor Extraordinary of Developmental Psychology at Anton de Kom University of Suriname; and editor of the Caribbean Journal of Psychology. In the past two years, he and colleagues were guest co-editors of two special issues of “International Journal of Play” with the theme “Play: Resilience and Vulnerability in Difficult Circumstances.”