Ottle: Wordle With an Orange Twist

Five letters, six tries, one puzzle a day. If you’ve spent any time online lately, you’ve no doubt seen Wordle—the game whose popularity has exploded across social media and the internet.

For the uninitiated, players must guess a predetermined five-letter word on a grid of yellow, green and grey boxes in six attempts. Amping up the social energy surrounding Wordle is its sharable grid, a glimpse into the mental journey a person took to figure out that day’s answer. 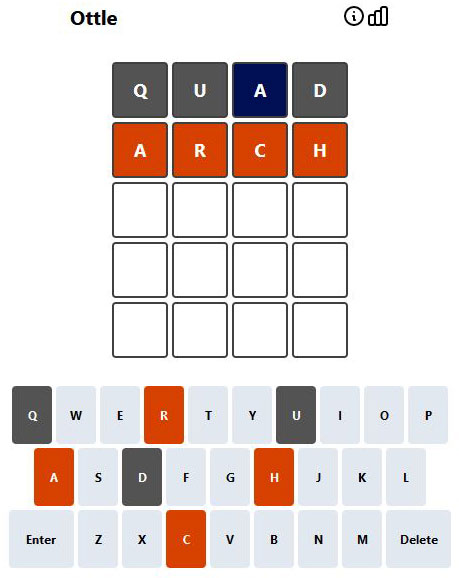 Like millions of others, members of Syracuse University’s Marketing team found themselves addicted to Wordle, sharing grids for fun and office bragging rights. The game’s widespread appeal served as the team’s inspiration for creating an SU version of the game. Named after mascot Otto the Orange, Ottle launched on Jan. 28 at ottle.syr.edu.

Coincidentally, the idea for developing Wordle’s Orange equivalent began percolating across different areas of Marketing at the same time. Manager of Social Media Strategy Jonah Restuccio took note of the booming online activity and began considering ways to capitalize on the trend to better connect people to the University and each other.

“We’re not doing just a one-off, short-term thing on social media,” he says. “We’re creating something people can come back and play day after day. Ottle is a way we can strengthen engagement and provide people a new outlet for doing this.”

Simultaneously, the Digital team saw the potential in a Wordle twin. “It started as a joke, mostly internal, but we realized how much other people might actually enjoy this, too, and the potential in sharing it with the much larger University community,” says Jesse Menn, director of marketing web development.

And just like that, a puzzle-forming partnership was born.

While Ottle replicates Wordle’s mechanics, staff injected a dose of Orange flavor by creating grid boxes in orange and blue and curating daily words with a Syracuse University theme. Words range from four to six letters, with a corresponding four to six guesses per puzzle.

A robust knowledge of University history and lore is helpful since some of the words can seem obscure. Take Hoople, for instance.

“Not many people know that Hoople used to be the building on campus where the National Veterans Resource Center stands now,” says Restuccio. “But people do enjoy letting us know how they’re doing. They’ve been tweeting comments like, ‘I got Lyman (Hall) on the first try’ or ‘I got tripped up on (sportscaster Mike) Tirico.’”

Executive Director of Digital Robin Wade oversees the social and digital teams and couldn’t be more enthused about her staff’s collaboration. 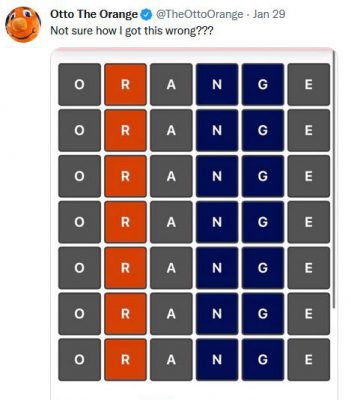 Mascot Otto the Orange shares his Ottle grid on Twitter.

“It started as fun, but I think what we realized is that this really does speak to the Syracuse University spirit,” she says. “It’s a way for us to reach our audiences—our students, alumni and prospective students—and get people engaged with and really excited about the University.”

That excitement is evident in the web traffic and social media mentions Ottle has garnered since its launch. The game is currently the ninth most visited page across the University’s web properties and tweets are flying in from everywhere. “I started seeing tweets in my Twitter feed in Polish,” says Menn. “That was a big deal for me.”

No matter their language, Ottle fans are bound by a shared history and community. And if one doesn’t succeed in getting the correct word today? No worries! A new Ottle will be out again tomorrow.