Weddings celebrate the love a couple feels for each other, a pledge to be loyal and faithful, in sickness and in health, until death do them part.

Weddings are full of time-honored traditions. A common one is the best man’s speech, which can serve as a platform for the groom’s best friend to describe the significant impact the bride-to-be has had on the groom’s life.

In the case of Adam and Kelly (Brant) Capozzi, it was a chance to combine their love for each other with their love of Syracuse University and its beloved mascot, Otto.

As Adam’s brother, Aaron, was preparing to address the crowd on March 31, 2018, at SKY Armory in downtown Syracuse, he fumbled through his pockets, searching for the words he had carefully penned. 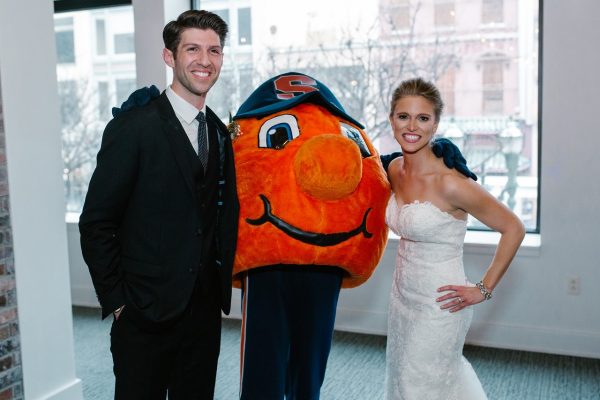 Adam and Kelly Capozzi posing with Otto on their wedding day in 2018.

Suddenly, Aaron turned on the microphone, proclaimed he misplaced his speech and called on a friend to help him out of this bind: Otto, with that trademarked enthusiasm, dashed down the aisle and hand-delivered the speech, to cheers from the audience.

“I was in shock. I’m not a traditional person at all and I was excited when I saw Otto come running out. Otto definitely lightened the mood and put a smile on our faces, and it was a fun touch to our special day,” recalls Kelly, assistant director of development, leadership and annual giving in advancement and external affairs.

“Syracuse University has always been a very big underlying theme of our lives and the life we’re building together, and we’ve always held Syracuse University in such high regard. It just made sense that my brother would work with the DJ to get Otto to come to our wedding,” adds Adam, the director of career services, assessment and student success in central Career Services.

In honor of Valentine’s Day, Syracuse University shared the stories of the three staff couples who have a special bond with each other and with the University. 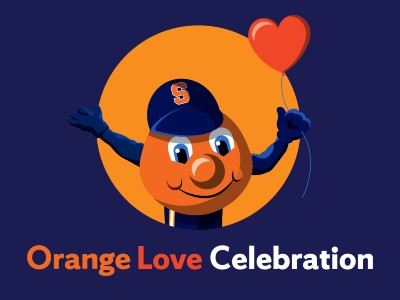 #OrangeLove celebrates staff and alumni couples from the Syracuse University community who share a special bond with each other and with the University.

When it comes to wedding crashers, no one is a bigger hit than Otto, who attends approximately 25 weddings each year, sometimes traveling great distances to participate in the couple’s special day.

“Otto was our surprise guest, getting the crowd up off their feet, leading the dancing and cutting the cake with me. Our wedding favors were little boxes filled with Orange candy and an Otto sticker. We definitely had a Syracuse theme to our wedding!” says Erica, director of communications and media relations in the College of Visual and Performing Arts (VPA). 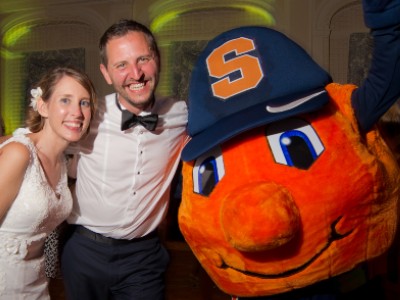 Erica Blust and Shawn Rommevaux pose with Otto during their wedding in 2015.

The Rommevauxs’ Orange story begins with a basketball. Shawn was born in nearby Jamesville, N.Y., while Erica was raised in Stittville, N.Y., outside of Utica. The two grew up rooting for the Orange, and Erica was a rabid men’s basketball fan, purchasing season tickets for the 2007-08 season.

As the start of the season drew near, Erica faced a dilemma: she needed a new season ticket partner. Shawn, who joined VPA’s office of recruitment and admissions in 2007, volunteered to accompany Erica and the rest is history.

The couple began dating in 2007, were wed in 2015, and have shared season tickets in Section 313 of the Stadium ever since.

“We’re both from Central New York and grew up cheering for the Orange, but neither of us realized the important role the University would play later in life. It has been the backdrop of so many memorable moments for us. We’ve made many great friends here over the years, which is by far the best part,” says Shawn, associate director of development, office of philanthropic engagement in advancement and external affairs.

Erica has worked for the University for 25 years, Shawn for 14 years. Excluding when they both worked at Crouse College and drove to campus together — “one of us gets ready and out the door in the morning faster than the other, so no one left the house happy,” says Erica—being Orange colleagues has brought the couple closer together.

“As much as we love our seats in Section 313, we’ve had some of the best times at Hookway Field playing summer intramural softball with our friends on the SCRU-Balls softball team … not to mention the post-game gatherings at the Inn Complete,” recalls Erica.

The internet and social media users alike have become obsessed with Wordle, the online word puzzle that has more than 3 million daily users scouring their brains to solve the five-word puzzle.

Jesse Menn, director of marketing web development, and his marketing colleagues built Ottle to test your knowledge of Syracuse University through a new word every day.

It’s only appropriate that the couple’s love of the English language would intertwine with their love of Syracuse University. 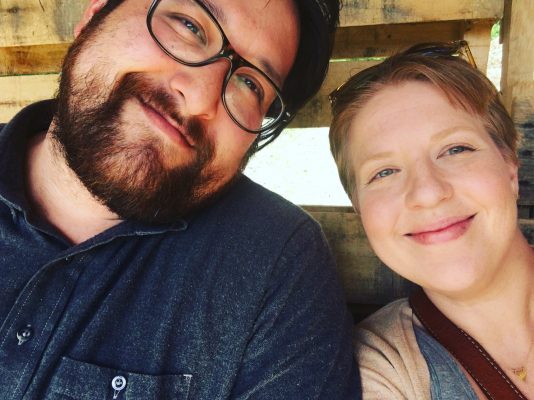 The two met 14 years ago, when they were enrolled in a linguistics class at Humboldt State University (now Cal Poly Humboldt) in Arcata, Calif. They moved nearly 3,000 miles across the country to further their academic pursuits in 2012, with Vanessa earning a master’s degree in library and information science in the School of Information Studies (iSchool) and Jesse enrolling in the College of Arts and Sciences’ Ph.D. program in English.

The couple wed in July 2013 on California’s central coast. While there wasn’t a direct Orange tie-in to their special day, Vanessa credits the University with affording them the flexibility to take time off, travel across the country and enjoy their wedding day.

“We definitely realize how fortunate we are to both get to work at the same University. We get to carpool to campus, and we know so many of the same colleagues and points of reference that it’s easier to talk about our days. The friends and connections we’ve made by both of us working at SU have also really helped us to feel less like transplants and more like we’ve found our new home,” says Vanessa, the Pan Am 103 archivist and assistant university archivist at the special collections research center (SCRC).

In his role, Jesse assists Vanessa’s work with the Remembrance and Lockerbie Scholars, from providing website updates to welcoming families back to campus each fall for Remembrance Week.

“We’re really lucky that we found a place that not only accepted us individually for our graduate programs, but gave us the opportunity to build our careers. We’re in different divisions, but we still get plenty of opportunities to collaborate. That’s one of the great things about working at the University is how often the SU community comes together to support one another,” says Jesse.

Among their favorite spots on campus, Vanessa and Jesse love to meet up for lunch on one of the benches along the Einhorn Family Walk.

It didn’t take long for Adam Capozzi and Kelly (Brant) Capozzi to realize they were made for each other. The two were matched on Tinder on a Friday night in 2014, chatted for six straight days and attended Taste of Syracuse for their first date, overlooking Hanover Square.

Almost immediately after their first date, they removed themselves from the online dating pool, with Kelly deleting Tinder, and Adam purging several dating apps from his phone.

“We knew this was the real deal,” says Kelly, who has worked at the University for five years.

“It was definitely love at first sight,” adds Adam, who has worked at Syracuse for eight years. 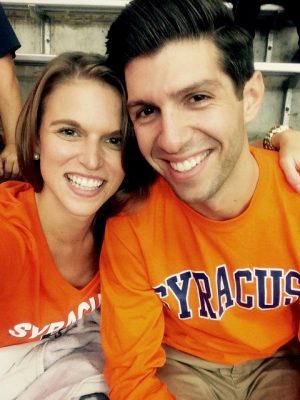 Kelly and Adam Capozzi cheering on the Orange men’s basketball team in the stadium.

Growing up in Seneca Falls, N.Y., Adam and his family were big Orange sports fans, so when Adam received an opportunity to work for the University, he seized it, accepting a job in the Martin J. Whitman School of Management in March 2014.

Kelly waited nearly three more years until her Orange opportunity presented itself, accepting a job with the College of Law on Jan. 13, 2017. One day later, with his beloved ready to begin her work career at Syracuse University, Adam popped the question, returning to the scene of their first date: Clinton Square near the ice-skating rink.

Like many Orange staff couples, the Capozzis share a love of Syracuse University basketball. To the point that when the calendar turns to November, their social calendar is set around when the men’s basketball team is playing.

“Kelly is the first one to make a funny comment about how our lives revolve around Syracuse basketball from November through March. We watch as many games as possible, whether on TV or at the Stadium,” Adam says.

Besides catching a game on campus, the Capozzis enjoy taking their dog, Tux, for a walk on the Quad during the nice summer weather.

“It’s great to rally behind something larger than yourself. Neither of us attended Syracuse, but we feel like we did because we work here and we’re so invested in this University. We’ve gotten to know so many different alumni and students in our roles and we feel like we both bleed Orange and have our honorary degrees from Syracuse,” says Kelly.