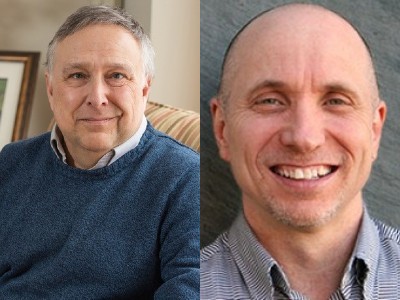 Setting the scene … It’s spring of 2020. The world has been shut down for a period of weeks or months (you stopped keeping track at some point). You are living with a disability—perhaps you’re blind or you have a highly complex autoimmune condition that makes it especially precarious to make your way through daily life during a global pandemic. You are feeling isolated, alienated, disconnected and at times downright terrified. What do you do?

For Stephen Kuusisto, poet, memoirist, University Professor and director of interdisciplinary programs and outreach with the Burton Blatt Institute, and Ralph James Savarese, poet, nonfiction writer, activist and professor of English at Grinnell College, in Grinnell, Iowa, this was their reality. Kuusisto is blind and has had pneumonia several times in his life, making him particularly susceptible to respiratory illnesses. Savarese is on high-powered immunosuppressants that make getting a COVID infection a potentially life-threatening event.

Their answer to “what do you do?” Poetry.

Together, Kuusisto and Savarese penned “Someone Falls Overboard,” a book of poems written over the course of two nine-day periods early in the COVID-19 pandemic. The book is a dialogue between the two acclaimed poets, following a model set forth by Marvin Bell and William Stafford with their 1983 collection titled “Segues.”

The duo wrote and exchanged poems at a rapid pace—16 lines apiece, three, sometimes four poems per day, riffing on one another’s themes and word choices—until 128 poems emerged. The collection is by turn tender, nostalgic, starkly funny, brutally honest, whimsical and misanthropic—a literary balm to soothe the soul during these uncertain and isolated times.

The quickness of the writing was deliberate; the project began when Kuusisto off-handedly suggested, “let’s write poems back and forth frantically to one another” as a way to pass the time and stay connected to one another. Savarese—who says he can typically barely write three sentences in 18 days, let alone 64 different poems—was a bit intimidated by the proposition. Kuusisto, who admits he is a fast writer by nature, likened the process to “playing speed chess with poetry,” which he considers to be great fun.

The frenetic pace of the writing helped circumvent any potential writer’s block, while also preventing either of them from taking the project too seriously—despite the seriousness all around them. 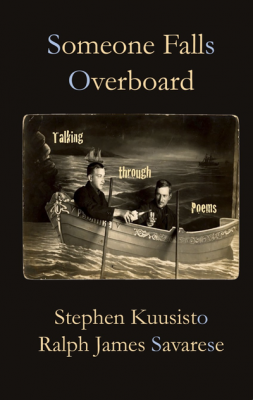 As “Someone Falls Overboard” was coming to life, 28 people died in the assisted living facility where Savarese’s mother lives. “During that first spring, the phone line was open between us, we talked constantly. Sometimes I could hear over the phone the screams, the sobbing,” he recalls. “There was something absolutely absurdist about the whole situation. Grim, terrifying. Part of this book is also comedic—there was this feeling like if we could just tell jokes fast enough, we might stay three steps ahead of what’s after us.”

Both men are long established in the history and traditions of both American poetry and global poetry, which is evident in the book’s many allusions to famous poets, ancient and modern philosophers, and thinkers of all kinds. “While these poems were written quickly, they are still quite layered in the back and forth,” Kuusisto says.

Savarese adds, sheepishly, “Then it’s like the Marx brothers got a hold of classic literature and shredded it, throwing lines around haphazardly … these go from high learning to anarchy very quickly. That’s part of the method of them, they became loonier and I think more fun as we proceeded.”

“Loonier and more fun” is part of the collection’s charm. As we’ve been collectively beaten down, discouraged, encouraged and discouraged all over again by the pandemic, the authors remind us that engagement with the arts can be a bright spot, if we so allow it.

“It was Bertolt Brecht who said that in the dark times, there will be singing,” says Kuusisto. “I think it’s important to remember that our creative capacities have always been the place we go to in the darkest times.”

As exemplified in “Someone Falls Overboard,” Kuusisto says that dysfunction will often take a backseat to the imagination. “The imagination can give us a bridge over troubled waters, as Simon and Garfunkel would say, and we found it in this book. I’m very proud of it.”

“Someone Falls Overboard” is available through Nine Mile Magazine and Books.