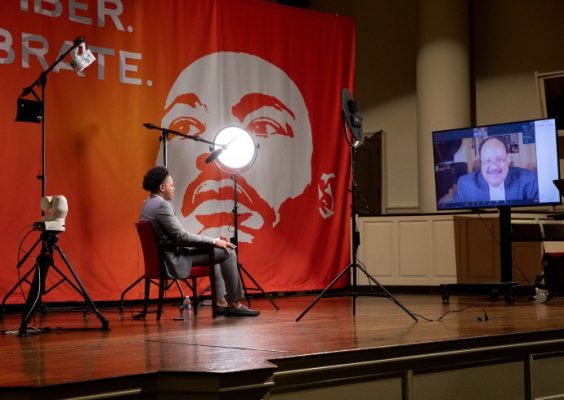 Traditionally held in the stadium on campus each January, this year’s celebration was held virtually due to the ongoing COVID-19 pandemic. This year’s theme was “We are Part of the Dream.” Iris St. Meran, reporter with NewsChannel 9, served as master of ceremonies. The featured speaker was Martin Luther King III, civil rights activist, global humanitarian, political leader and eldest son of Rev. Dr. Martin Luther King Jr. and Coretta Scott King.

A choir consisting of members of the greater Syracuse community and the University’s Black Celestial Choral Ensemble (BCCE) opened the event with a rousing rendition of “When the Saints Go Marching In.”

David Barbier Jr. ’23, co-chair of the celebration with Hendricks Chapel Dean Brian Konkol, offered welcoming remarks from 119 Euclid Avenue, the University’s recently reimagined space to celebrate the longstanding history, traditions and contributions of the Black community on the Syracuse University campus and beyond. 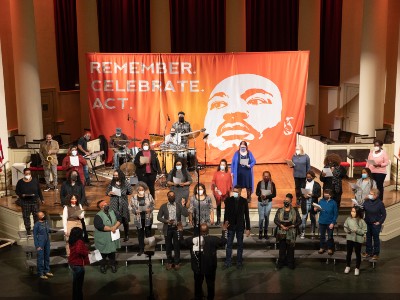 “The creation of 119 Euclid is one example of embracing the theme for today, which is ‘We are Part of the Dream,’” said Barbier. “In choosing the theme for this particular year, the planning team sought to honor the life and legacy of the Rev. Dr. Martin Luther King Jr. by reflecting not only on his dream from years ago, but how we must be a part of it in the here and now, and in the years to come on campus and far beyond.”

Konkol stood before the University’s iconic Martin Luther King Jr. quilt, “The Spirit of the Beloved Community,” one of the familiar elements of the celebration each year, to offer his welcoming remarks and an invocation. The quilt was imagined by a former student in 1991 and completed by the Hendricks Chapel Quiltmakers in January 1993.

“As this quilt was constructed—stitch by stitch, patch by patch and block by block—the assembly of those who made it happen were also constructed,” said Konkol. “Hour by hour, day by day, week by week, into the embodiment of a beloved community.” Today we honor those responsible for this quilt, and in doing so we honor all those who seek to be a part of Dr. King’s dream for a beloved community. Stitch by stitch, patch by patch, block by block.”

“In a world that is both broken and beautiful, and a time that is both woeful and wonderful, there continues to be a dream among us. A dream to become a beloved community. We are indeed a part of the dream, so may we be so bold and so humble to learn from our past and to believe in the abundant goodness of our present. And to embrace the faith that indeed all things are possible,” Konkol said.

Chancellor Kent Syverud, in his remarks, paid tribute to Dr. King, Charles Vert Willie G’57, H’92 and Walter Broadnax G’75. Willie, a friend of Dr. King’s from Morehouse College, was Syracuse University’s first tenured Black faculty member and a giant in the field of education and civil rights. Dr. King visited Syracuse University in 1961 and 1965 at Willie’s invitation. Willie passed away on Jan. 11 at the age of 94. Broadnax, a student of Willie, is Distinguished Professor Emeritus of public administration and international affairs in the Maxwell School and a member of the University’s Board of Trustees.

“At Syracuse University we recognize that academic excellence cannot exist without a determined commitment to the principle that all are created equal. Syracuse University must be a place that is welcoming to all. We study social movements, history, political science and literature to learn lessons from the past. We have difficult conversations, but we do so with respect and recognition of the dignity of others,” Chancellor Syverud said. “Let’s take our inspiration from Dr. King and Dr. Willie and Dr. Broadnax. Let’s persevere through setbacks. Let’s commit ourselves to excellence that is rooted in equality. Let’s make Syracuse University an example of the transforming power of higher education.” 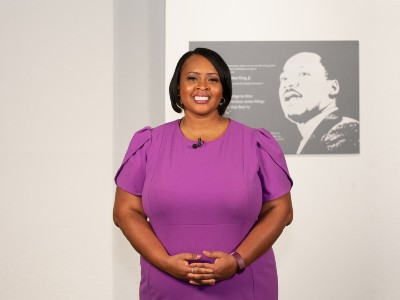 Iris St. Meran, reporter at NewsChannel 9 and master of ceremonies for Sunday’s event

The MLK Unsung Hero Award was bestowed on eight recipients throughout the evening. They include Nathena Murray ’22 and Chenhui “Peipei” Liu ’23 (Syracuse University students); David Knapp, assistant professor of music education in the Setnor School of Music in the College of Visual and Performing Arts (VPA) and School of Education, and Joanna Spitzner ’92, associate professor of studio arts in the School of Art in VPA (Syracuse University faculty); Vince Cobb Sr., media technology consultant and engineer in the Newhouse School (Syracuse University staff); the Institute of Technology at Syracuse Central varsity football team (community youth); and Ocesa Keaton G’15 and Beverly Oliver (community members).

In addition to the combined community and BCCE choir, other performers throughout the evening included the Royalty Step Team from the Southside Academy Charter School and Eesanajja Grayson, founder of Badakan Afrique Drum and Dance.

The celebration culminated with conversation with Martin Luther King III, who was interviewed by event co-chair Barbier. As the eldest son of the late Rev. Dr. Martin Luther King Jr. and Coretta Scott King, King serves as an ambassador of his parents’ legacy of nonviolent social change.

King spoke about the importance of Martin Luther King Jr. Day, which was signed into law as a federal holiday by President Ronald Reagan in 1983 and was celebrated as an official holiday for the first time in 1986. “On Jan. 15, 1969, less than a year after Dad was killed, my mother and a team of people in Atlanta and some around the country were already beginning the process of observing what would later become a King holiday,” King said. “In our minds it was a day where we would be engaged in doing work.” His mother, Coretta Scott King, lobbied every U.S. senator and many congresspersons to make the holiday a reality. Over the years, the King holiday has evolved to include activities including nonviolence and voting rights training and volunteer activities. King noted that although his father did most of his work in the United States, there are more than 120 countries around the world that observe the King holiday.

“As early as I can remember, I have always felt carrying this name was a blessing and I never focused on the burden of being who I was,” King said. His mother told him that he did not have to follow in his father’s footsteps. “Just be your best self and we will support you in all the ways that we can.” He did follow in his father’s footsteps in many ways, attending Morehouse College and engaging in civil and human rights. Today, he, his wife and daughter lead the Drum Major Institute, advancing Dr. King’s vision of a world free of racism, poverty and violence by embracing the values of peace, justice and equity.

“Today we are at one of the worst points in the history of our country. We as a nation are far, far too divided. Dad used to teach us that we can learn how to live together without destroying person or property. We can disagree without being disagreeable. … Dad would say we must learn nonviolence or we will face non-existence,” King said. “I am going to embrace the concept that we as a human species can and must do better and we must find ways to engage without destroying each other.”

Barbier asked King what he recalled from April 4, 1968, the day his father was assassinated in Memphis. King and his siblings learned their father had been shot from a news bulletin on television. Four days later, he and two of their siblings accompanied their mother to Memphis, where she led a march in her husband’s place. The next day, on April 9, 1968, they said goodbye to their husband and father surrounded by politicians, entertainers and the Atlanta community.

Barbier asked King how he perceives colleges and universities as agents of change.

“Dad had a quote that said that education without character is dangerous,” King said. “I think that today our institutions are constantly preparing young people for their destinies. … Education gives you the theory, but you sometimes have to be engaged in pragmatic practical experiences to truly understand.” King spoke of the student engagement that took place in the 1960s that ultimately brought about change. Change can also come through tragedies, such as the murder of George Floyd that sparked protests in all 50 states and around the world and brought many of the relics of the Confederacy down. King also noted that with progress comes setbacks. His father delivered his “I Have a Dream” speech in Washington, D.C., on Aug. 28, 1963. Just over two weeks later, on Sept. 15, four young African American girls were killed when the 16th Street Baptist Church in Birmingham, Alabama, was bombed.

“We have to find and look for the best in America and bring that together,” King said. “We have to learn how to disagree without being disagreeable so we don’t run the risk of destroying our nation.”

King also spoke about his mother, Coretta Scott King, who was a civil rights leader, a fierce advocate for her husband’s legacy and, above all, a mother to her four children. “She was a coalition builder,” King said. “If it was not for Mother, I don’t know how far Dad’s legacy would have gone.”

In closing, King said a lot of work must be done to create the beloved community that his father and mother envisioned. “I want everybody at Syracuse to fulfill and achieve whatever they want to achieve,” he said. “I hope that you would look to Martin Luther King Jr. for a philosophy that helped to transform our nation and the world, so that our nation and world becomes better.”