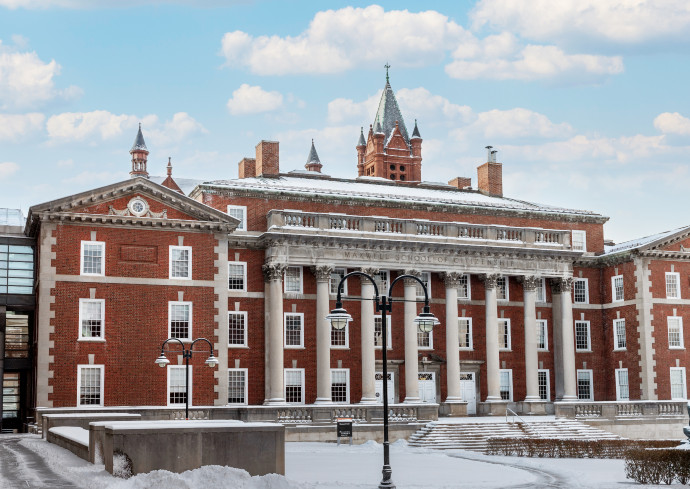 When the Maxwell School of Citizenship and Public Affairs opened in 1924, it included a citizenship curriculum for all undergraduates in the liberal arts. Thirty years later, Merle Goldberg traveled from her home in Maryland to Syracuse University, hoping for some direction. Her experience with “the most amazing group of professors” inspired her recent $3 million gift to the University that will reverberate for generations to come. Fabian’s classes in citizenship, American literature and philosophy and a semester spent studying in Washington, D.C. (where she met with Hubert Humphrey and toured the Supreme Court), fed her interest in public affairs and the obligations of citizens to be knowledgeable and active participants in democracy.

As part of the Forever Orange Campaign, the pledge by Merle Goldberg Fabian ’59 will establish an endowed professorship in citizenship and critical thinking in the Maxwell School. “I was a good high school student, but didn’t have a vision,” recalls Fabian. “But when I took classes with professors who had a world view, who were so educated and incredibly articulate, they inspired me. They had a great sense of what government responsibility and citizens’ responsibility should be. I learned not to simply accept what I heard without challenging it in some way.”

She went on to earn a graduate degree in library science from Catholic University of America and held positions of responsibility at the Canadian Embassy Library, the San Francisco Public Library and the Government Affairs Institute.

Fabian believes the need for critical thinkers is more important than ever in a nation plagued by divisiveness and disinformation. Her conversations with Maxwell Dean David M. Van Slyke convinced her that today’s students could fill that need when inspired, as she was, by dynamic professors.

“I’m so encouraged by the fact that our students really want to make a difference,” says Van Slyke. “Merle believes, as I do, that professors can do a lot to expose students to a range of ideas that they may not have thought about or experienced. The most impactful professors bring together research and teaching and policy relevance to send their students out into the world to be constructive forces of change.”

Van Slyke is confident that the Merle Goldberg Fabian Professor of Excellence in Citizenship and Critical Thinking will be an inspiring force who can impact careers and change lives. Fabian’s gift endowing the professorship says it is intended to support “an accomplished professor who champions ethical citizenship and educates students on the importance of critical thinking in service of democratic values within American politics and government.”

Van Slyke notes that “nearly every student at Syracuse University takes a social science class in Maxwell where they are similarly encouraged to challenge ideas, wrestle with issues, and become a force for positive change.” Van Slyke intends to name a faculty member in the spring semester.

“I would like to see the person who is awarded this professorship be someone with a strong academic background and who is already engaged in public issues,” says Fabian. “This person should be highly articulate and care deeply about student achievement and engagement. People of my generation may not have that much more time to contribute, but somewhere between me and those college students, there are people who are smart and creative and making a difference.”

Through their family business—Bowl America Inc.—Fabian and her brother Leslie H. Goldberg accrued an impressive estate. Following Leslie’s death, his sister focused on setting up a family foundation and making donations in his name to his alma mater, the University of Virginia. That inspired her to create an endowment at her own alma mater while she is alive and able to see its impact on Maxwell faculty and students.