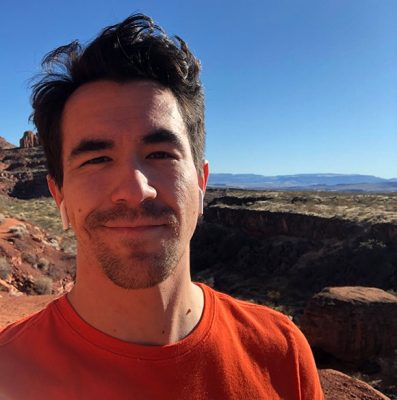 Austin Peña doesn’t like boundaries. He chose Syracuse University for graduate school because he wouldn’t be forced into a single educational track. “I question the traditional boundaries of architecture and it’s a very forward-thinking program. The faculty give us a lot of flexibility and leeway to go places with our designs and project that traditionally wouldn’t be found in an architecture program,” he says.

“I started an undergraduate degree in construction management, but then I took an economics course. I was fascinated by how economics relates to human decision making and to the social conditions in which all of us live. That fascination has continued into my graduate career in architectural design,” Peña adds.

Peña considers architecture one of the most human-centered fields out there. It encompasses individuals and their stories, communities, cultures and nationalities, “It’s a great process that requires a lot, but it gives a lot back in return.”

It’s not surprising that he chose a master’s project that puts people at the center. Focused on the four corners region in the American southwest, the homeland of Navajo nation, he says, “There has been a lot of research done on the poor quality housing conditions that exist on native lands, but there’s a gap in research on real, plausible and sustainable solutions. My hope is to produce a solution that contributes to the narrative and moves it toward solutions.”

Homes in the four corners region often don’t have access to electricity or have running water. Residents are exposed to radiation from adjacent abandoned uranium mines, contributing to high rates of cancer. “I want to design a housing system that alleviates the constant stress of not having daily needs met in terms of basic living conditions. We know this stress contributes to high rates of alcoholism, chronic disease—what if we could solve it? It is an egregious disservice to peoples who colonists have displaced and discriminated against for centuries.”

Peña feels a personal call to help solve problems with native communities. His great grandmother was a member of the Ohkay Owingeh Pueblo in New Mexico, but left her community as a child, eventually marring a Mexican immigrant and helping her family build generational wealth and success. This privilege doesn’t exist for many people in the four corners region and for native peoples generally.

He is looking at cutting edge materials and solutions for housing and infrastructure to tackle water scarcity, an underserved electrical grid and protection from residual uranium mine radiation.  “It’s really a building systems project, heavily reliant on materials science and environmental engineering. It’s also an economic policy project, as I am looking at public policy, and sources of funding and whether that funding is accessible to the people in Navajo Nation.”

Peña’s objective is to take a sustainable approach that is consistent with the values of the community. A central factor of his research will be interviewing Diné (Navajo) makers and artists. He says, “There is a strong and rich Diné maker culture that can inform architectural design. It’s not just another affordable housing project, but one that listens to the people in a way that honors their culture and their heritage.”

Peña’s desire to cross boundaries isn’t limited to his studies. As someone taking an integrated approach to architectural design, he’s found that being a teaching assistant in architectural theory has improved his thinking. He says, “It’s really forced me to actually know the theory. In teaching, you can’t get by with a passing knowledge. It has really forced me to know it in depth.” Peña invites his students and colleagues to think outside traditional tracks and believes that teaching architectural theory allows him to apply it better in his own work.

He’s also keen to make connections between students. “One of the challenges in the architecture graduate programs is that there are numerous different lengths of programs depending on students’ previous experience—so there are several different cohorts that come in each year,” he said.  As president of the Graduate Students of Architecture, he aims to help fellow students cross the boundaries of their cohort to leverage the broader, more divers, and rich network that exists at the School of Architecture.

“There are people from around the world here, and a big value of the education here is the professional connections and networks that you can build. So the GSA exists to foster connectivity across the entire program. It’s a rigorous program and it’s easy to get so caught up in your work that you don’t look to the studio down the hall to see what exciting and innovative things other studios are doing; the opportunities GSA tries to provide for students to find a sense of belonging are really valuable.”