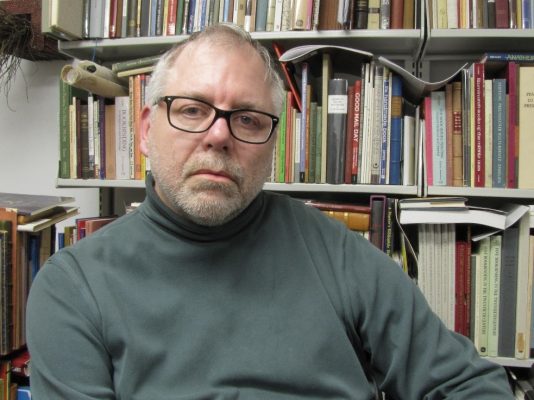 Syracuse University Libraries has selected Peter Verheyen, research and emerging issues analyst, to receive this year’s Distinguished Service Award. The award will be presented at the Libraries’ holiday and recognition event and is a more than 30-year tradition recognizing Libraries staff who have made a significant contribution to both the Libraries and the broader Syracuse University community. A cross-departmental panel of Libraries staff judge nomination entries and select a deserving member based on the criteria of dependability, flexibility, quality of work, dedication and collegiality. The Distinguished Service Award, which is open to all Libraries employees, allows peer recognition based on nominations, a recommendation from the person’s supervisor and recommendations from at least two members of the University community.

Peter Verheyen originally joined the Libraries in 1995 as conservation librarian, having previously worked at Cornell University Library and Yale University Library. After leaving briefly for a corporate position in his field, he returned to assume the role of preservation and access librarian for Special Collection Research Center, then was promoted to head of preservation and conservation. In 2013, Peter assumed his current role as research and emerging issues analyst in the Program Management Center. In this role, he provides ongoing research around library trends and data gathering to help the Libraries make the best-informed decisions.

Peter is a world-renowned expert in the fields of bookbinding and library conservation. He regularly presents and publishes at the local, national and international level. He founded the Book Arts listserv, a global listserv for bookbinders with more than 2,500 subscribers and created the Book Arts website and Bonefolder e-journal and blog, which publishes book reviews and other publications about bookbinding. Peter was awarded the prestigious Guild of Book Workers’ Lifetime Achievement Award in 2016 in recognition of his pioneering use of digital technology in creating the listservs and websites that have brought the global bookbinding community together.