For nearly two decades, Mary Lovely, professor of economics in the Maxwell School of Citizenship and Public Affairs, has focused on China’s sustainable development and its emergence into the global market. Her expertise has drawn much interest from media outlets, from Bloomberg and CBS News to The New York Times and Reuters. 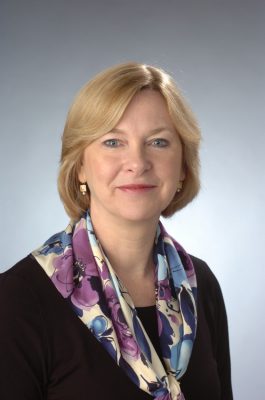 Resident expert: Economist and Maxwell School of Citizenship and Public Affairs Professor Mary Lovely will serve at the Library of Congress for nine months starting Jan. 3.

Lovely says her appointment is “very exciting” and she plans to focus her research on the role of multinationals and how their interests were represented during the period when the U.S. was negotiating China’s entry into the World Trade Organization.

“They will certainly have documents and hearing testimony related to that,” says Lovely, who served as editor of the China Economic Review from 2011-15 and is also a senior fellow of the Peterson Institute for International Economics.

The Library of Congress offers access to the creative record of the United States—and extensive materials from around the world—both on-site and online. It’s the main research arm of the U.S. Congress and the home of the U.S. Copyright Office.

“I’m hoping to do three events—create a panel that I moderate and write an overview brief for Congressional staff with suggested readings,” she says. Possible topics include trade policy, the future of the U.S. dollar and China’s digital currency, and Chinese industrial subsidies.

That intellectual exchange is the goal of the program. The Kluge Center was established in 2000 by a $60-million endowment from philanthropist John Kluge to bring top scholars from around the world to residence at the Library of Congress to make their expertise accessible to Congress and contribute to conversations about challenges facing democracies in the 21st century.

“Something I’ve tried to do when talking to reporters is to elevate the conversation, but often they pull a sound bite that’s the pluckiest,” says Lovely. “So, I’m really looking forward to facilitating these conversations for policymakers. It’s normally very hard to get access to Capitol Hill.”

Lovely will teach at Maxwell’s Washington, D.C., facility housed at the Center for Strategic and International Studies in fall 2022 and return to the main campus in Syracuse in spring 2023.