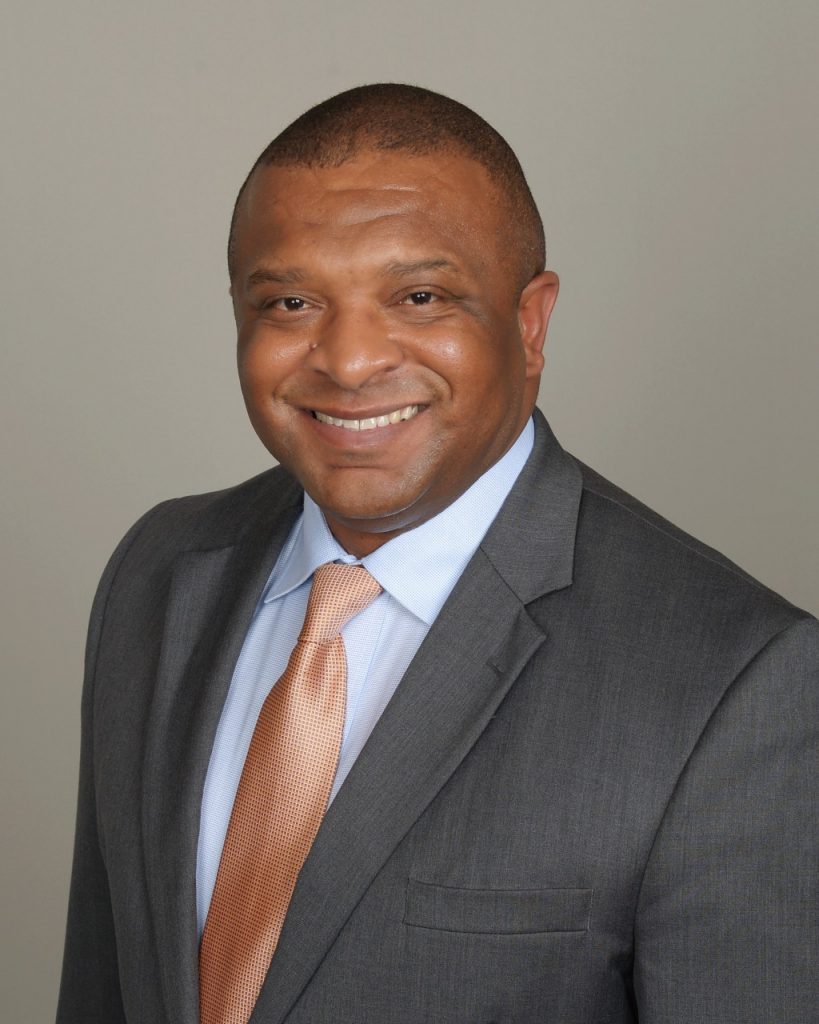 Anthony Cosby often starts his days at 4:30 a.m. with a three-mile walk—not to beat the San Antonio heat or enjoy the quiet pre-dawn hour, but because it’s the only time left in his day to squeeze in fitness.

As an entrepreneur, dad to an aspiring tennis star and full-time employee of the Institute for Veterans and Military Families (IVMF) at Syracuse University, Cosby’s days manage to be filled to the brim with hustle and bustle—which is exactly how he likes it.

From his home office in Texas, Cosby is currently director for employer outreach and co-director of the AmericaServes program, one of the eleven national training programs conducted by IVMF. He works with employers across the country to help them secure military talent, including veterans, transitioning service members and military spouses, and partners with public, private and nonprofit organizations to help veterans and their families access a variety of services that can help them achieve their goals.

Motivated to Give Back and Serve Others

After retiring from a 21-year career in the U.S. Navy in 2012, Cosby struggled with his transition back to civilian life. This experience inspired him toward a career path helping other veterans and military-connected folks transition smoothly and seamlessly into the workforce post-service.

“I was in talent acquisition toward the end of my military career, so I wanted to see if I could transfer those skills to the private sector,” he says. “I got my career coaching certification and landed a job at the University of Texas (UT) at San Antonio as an alumni career coach and from there it was game on … I was able to assist folks and that’s when I saw my true calling to help people.”

Cosby worked for UT San Antonio and then Webster University, but he’d seen a “60 Minutes” interview in 2012 that had planted a seed in his mind. The segment featured IVMF Founder and Executive Director J. Michael Haynie speaking about the Entrepreneurship Bootcamp for Veterans, which not only put Syracuse University on his radar, but also sparked Cosby’s interest in becoming an entrepreneur.

Four years later, in 2016, he would join the IVMF team as the program manager for Onward to Opportunity (O2O) at Joint Base San Antonio. O2O helps prepare service member and military spouses with industry-recognized certifications and skills training across high-demand sectors and occupations, like cybersecurity, project management and human resources.

“We started out with 32 people participating and now, fast-forward five years, and we’ve been able to help over 50,000 folks and change so many lives,” Cosby says. 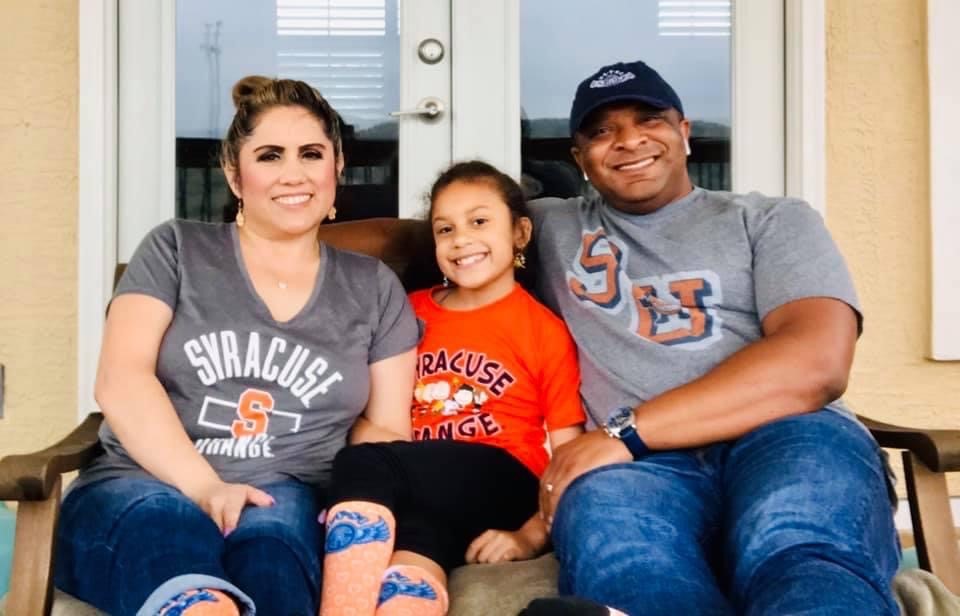 As co-director of AmericaServes, which works to coordinate support for military families in communities all over the U.S., Cosby shared an anecdote about an elderly couple—a retired veteran and his wife—in their 70s in San Antonio. The couple was skeptical of organizations that claimed to help vets because they had been told “no” one too many times. Once they got on the phone with an AmericaServes intake specialist, they were asked a question they weren’t used to hearing: “How can we help you?”

“From this one access point, we were able to help them secure a free medical bed for the husband, who had had an amputation,” Cosby says. “Then we found out the wife was taking her husband to dialysis in a heavy, cumbersome wheelchair, so we were able to work with our local connections to get them a lighter wheelchair that was more easily accessible. We helped secure rides to and from dialysis so his wife no longer had to wait in the car for hours at a time. We even found out they were close to losing the home they rented because the building had been sold, and were able to help them secure six months of free rent in an apartment building that they loved.”

For Cosby, being able to help people in such profound and impactful ways on behalf of Syracuse University keeps his early mornings and long days in perspective.

With that “60 Minutes” segment still in his mind, Cosby jumped at the opportunity to attend IVMF’s Entrepreneurship Bootcamp for Veterans (EBV) in 2019 at Texas A&M University. The program ignited his career as an entrepreneur and in 2021, after eight months of ideation, he launched STZY, a brand of athletic/performance-based socks.

Importantly, Cosby says, STZY is not only a sock brand but a Certified Pending B-Corporation grounded in the mission of positively impacting the lives of student-athletes in need all over the world to keep them pushing toward their goals and aspirations, within and outside of the athletic realm.

“People are drawn to the socks because we’ve worked hard to make them the most comfortable sock known to man, but I think people are also drawn to the intentionality and the themes of empowerment that are present in our brand and our marketing,” he says. 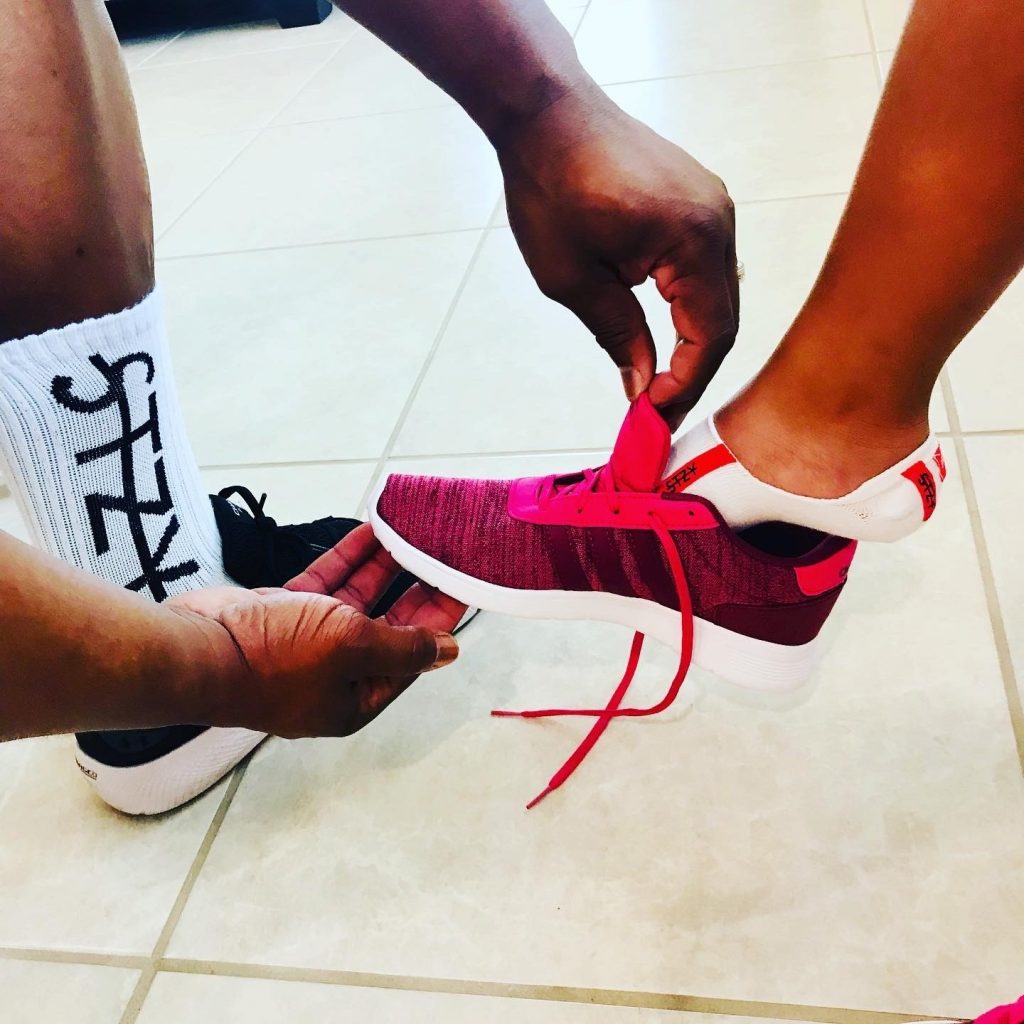 STZY is growing rapidly—the socks sold out within 40 days of the brand’s initial launch and have attracted attention from the likes of NFL and WNBA players interested in collaborating with the brand.

The company is preparing to launch their “V2” socks this month with a women’s line, and Cosby hopes it won’t be long before you see STZY socks at national retailers like Target, Foot Locker or Dick’s Sporting Goods.

The skills he learned during EBV have been instrumental to his success.

“The program taught me that I had to get laser-focused and to learn and understand the art of pivoting,” he says. “2020 and 2021 have been no joke in terms of getting a business off the ground, but my ability to focus and adapt has served me well.”

One of STZY’s early adopters and student-athlete ambassadors is Cosby’s 9-year-old daughter, Maria, who first picked up a tennis racket at age 3 and has since trained to become an elite tennis player. This summer, she played with 14- to 18-year-olds and her goal is to play in the U.S. Open by age 16.

Cosby says the spare time he finds between his work at IVMF and building and growing STZY is usually spent on the court, picking up balls while his daughter practices. He feels blessed to be able to spend time watching her talent unfold—and as a business owner, draws inspiration from her dedication to her craft.

“One thing I’ve learned from watching my daughter is—she can see her whole future, but she also knows that nothing good happens overnight,” Cosby says. “Great things take time to evolve. Even though I want STZY to shoot to the moon, I know that it’s going to take a bit of time. But I truly believe that if you put the work in and you’re a good person, big things are going to happen.”

By that philosophy, you can count on STZY going into the stratosphere—and Maria landing her spot in the U.S. Open.

Data is everywhere. From how many steps you take in a day to the quality of your sleep, it seems that every aspect of our daily lives can be assessed by crunching the numbers. In Nick Armstrong’s role as the…