For the Men’s Club Rugby team, the Fall 2021 season followed a challenging year as the pandemic required limitations to practice and play. It was especially difficult as the team started with just eight returning players. While there were experienced players on the team, for many, this was their first collegiate rugby experience due to the pandemic, and with so many new players, a large portion of the team had never played together. 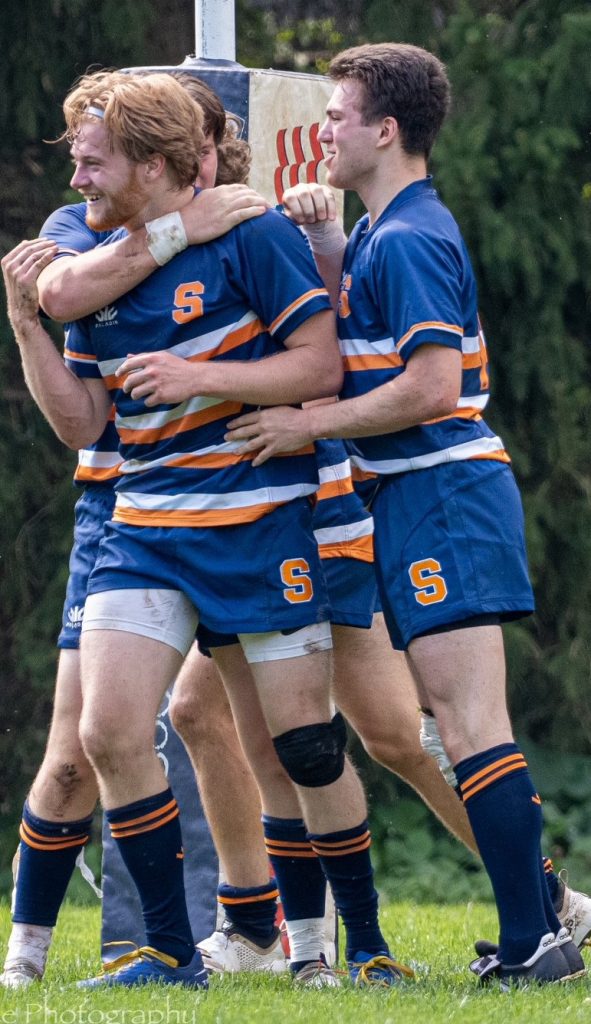 “As the competition stiffened, the games became closer, but the young team demonstrated some grit, determination and spirit to overcome inexperienced mistakes to finish the league season undefeated,” says Wilson, who has been connected to the team since 1970 when he first joined as a player. He has been the head coach for the last 38 years.

While everyone looks forward to the wins, the coaches and players stress two other important facets of playing this game: learning and community.

“I’m glad the season went the way we hoped, and it caps off for me a rugby career that exceeded even my own expectations for myself. I’ve learned so much about myself and others from this game, and I only hope to learn more,” says Merriam, a senior in the S.I. Newhouse School of Public Communications.

“To finish top of our division and be undefeated in division play as such a young team was amazing. We put so much work into this season to come out with some big wins throughout the season was huge for us,” says Brady Thomson, a first-year student in the School of Education. “To go up against some of the top teams in our conference is always a good learning experience, even if we lose. We don’t have a losing culture here at Syracuse rugby, we only win or we learn.”

As one of the 50 sport clubs offered through the Barnes Center at The Arch, there are many options for students to engage in competition while building friendships and community, much like the members of the rugby team have experienced.

“My favorite part about being on the Syracuse rugby team is the brotherhood I’ve gained from it. Being a freshman from England, I was scared I wasn’t going to really fit in anywhere, but the rugby team gave me friends and a collective sense of ‘home away from home’ that I know the other teammates feel, too,” adds Thompson.