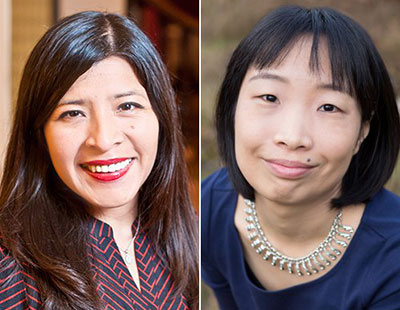 Two leading scholars in the areas of global Indigenous environmental studies are joining the Native American and Indigenous studies (NAIS) program in the College of Arts and Sciences | Maxwell School of Citizenship and Public Affairs (A&S | Maxwell). Mariaelena Huambachano, assistant professor of religion, started her position in fall 2021 and Chie Sakakibara, associate professor of geography and the environment in A&S | Maxwell, will start her position in spring 2022.

The NAIS program focuses on research and scholarship about issues of concern to Native societies around the world. Huambachano’s research examines food sovereignty and sustainability. Sakakibara’s work explores the interplay of climate change and Indigenous resilience.

With the addition of Huambachano and Sakakibara, the scope of NAIS in A&S will be greatly expanded, says Scott Manning Stevens, associate professor of English and director of the NAIS program.

“My hope is that students of all backgrounds will recognize what a tremendous opportunity they have to open their minds to different ways of seeing the world around us and of dealing with pressing questions about the planet’s future,” says Stevens.

A&S Dean Karin Ruhlandt notes that intercultural competency and social justice are longstanding areas of strength across A&S departments and programs. “The hallmark of an A&S student is their intellectual openness toward the perspectives, cultures and knowledge of people everywhere. For that reason, we are proud to be home to the growing Native American and Indigenous studies program, where students can study important societal, political and ecological issues alongside top scholars like Mariaelena and Chie.”

Mariaelena Huambachano is a native of Peru of Quechua ancestry who has lived in Aotearoa, New Zealand, from a young age, inspiring a collaborative and cross-cultural approach to her work in food and environmental justice, well-being, sustainable development and public policy. She completed her graduate studies at the University of Auckland in Aotearoa, New Zealand. She explored food security as seen through an Indigenous lens—the Māori and Quechua peoples—highlighting the value of “food sovereignty.” Indigenous food sovereignty refers to Indigenous communities’ right to control how their food is produced and distributed, and challenges industrial food production, which Huambachano says often exploits the lands and disrupts human and non-human flourishing. Food sovereignty is critical to Indigenous communities’ health, well-being, economic resilience and cultural heritage.

Huambachano previously was an assistant professor of civil society and community studies at the University Wisconsin at Madison. Her research focuses on the intersections of Indigenous traditions, right to food and well-being. To give voice to and recognize unique knowledge systems, she developed the ‘Khipu Model,’ an Indigenous research-based, which she uses in her work with Indigenous communities. As an Indigenous, community-engaged scholar of food and environmental justice, she explores the traditional values systems and philosophies of well-being of Indigenous peoples. She has numerous articles in English and Spanish language journals and has contributed chapters to collections such as the “Routledge Handbook of Sustainable and Regenerative Food Systems and Critical Studies on Corporate Responsibility, Governance and Sustainability.” She is completing her book manuscript “Rematriating well-being: Indigenous traditions for living well” to be published by the University of California Press.

“My teaching philosophy is informed and shaped by my cross-cultural experience as a Native Peruvian Indigenous scholar who has lived from a young age in Aotearoa, New Zealand, the home of the Indigenous Māori culture,” Huambachano noted in a previous A&S news article. “Focusing on the richness and breadth of cultural diversity and humility, I seek to address environmental and food justice issues, providing my students with a vibrant, inclusive, collective and creative learning environment.”

Chie Sakakibara currently teaches at Oberlin College as an associate professor of the environmental studies program, and will join the A&S | Maxwell Department of Geography and the Environment in spring 2022. Sakakibara is of Ryūkyūan descent, an Indigenous group of southwestern Japan including the Okinawan archipelago and its diaspora within and beyond Japan.

As a cultural geographer, Sakakibara’s research focuses on the humanistic dimensions of global climate change in Native North America, specifically on Indigenous sovereignty, health and well-being, and environmental justice in Arctic Alaska. Sakakibara holds a Ph.D. in geography and M.A. in art history from the University of Oklahoma, with an undergraduate degree in Native American studies from the same institution. She has published widely in academic journals in geography, polar studies, anthropology, and climate studies. Her work in the Arctic has received three grants from National Science Foundation’s (NSF’s) Arctic Social Sciences Program, and the Barrow Arctic Science Consortium, resulting in the publication of her recent book, “Whale Snow: Iñupiat, Climate Change, and Multispecies Resilience in Arctic Alaska” (University of Arizona Press, 2020), which was awarded the American Association of Geographers Meridian Book Award for Outstanding Scholarly Books in Geography, the annual prize for a book that conveys most powerfully the nature and importance of geography.

The scope and significance of Sakakibara’s scholarship is not limited to Alaska but intersects with diverse projects in North America and the Pacific Rim, where human well-being and society-nature intersections are threatened by climate change. Sakakibara’s emerging collaboration with an Indigenous Ainu community of northern Japan was recently funded by the Research and Promotion of Ainu Culture, and she is currently drafting an NSF proposal in partnership with her Ainu colleagues to place the often-marginalized Indigenous environmental history in the hands of contemporary Ainu society to facilitate decolonization.

Sakakibara’s work also extends to the environmental humanities, which bridges traditional divides between the natural sciences, engineering, social sciences and the humanities, in an effort to address environmental challenges. “As global climate change and the pandemic become increasingly deadly forces, the environmental humanities, coupling scientific rigor and creative practice, is necessary for thinking through how to live well on the earth,” says Sakakibara. “I would love to develop courses at Syracuse that explore many connections between Indigenous societies and nature to promote humanistic understandings of and solutions to environmental challenges.”

Huambachano’s and Sakakibara’s appointments are part of the University’s research clusters initiative, where multiple scholars are hired into at least two schools or colleges in related areas, based on shared, multidisciplinary or interdisciplinary research interests. The initiative serves to strengthen research activity, enhance faculty diversity and develop opportunities for student research and learning that responds to societal challenges. Their hires fall within the Environmental Humanities (NAIS) category, which is part of the Energy and Environment cluster initiative.