Stephen Woodard ’70, who served as a captain in the U.S. Air Force, was a proud Air Force ROTC cadet as a student at Syracuse University from 1966-70. He earned a degree in English literature from the College of Arts and Sciences and met his wife, Carol Woodard ’70, a graduate of the Falk College of Sport and Human Dynamics. It was a time that was the foundation of his personal and professional life. 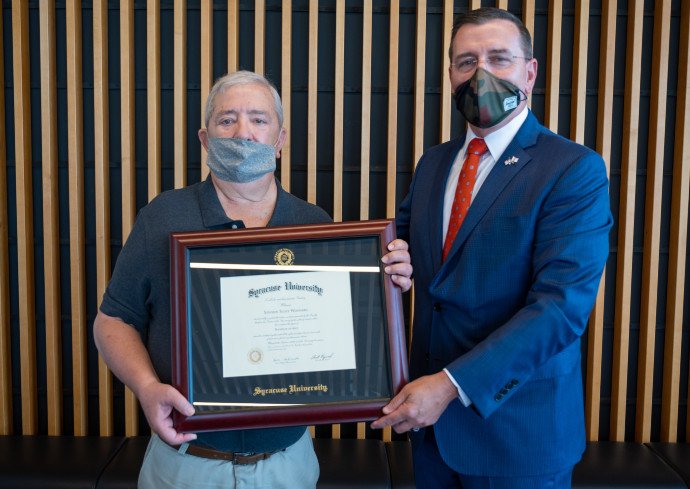 Air Force veteran Stephen Woodard ’70 returned to campus in August and received his diploma from retired U.S. Army Col. Ron Novack, executive director of the Office of Veteran and Military Affairs. Woodard was unable to attend his graduation in 1970.

It wasn’t until his senior year that something changed; he didn’t feel welcome on campus anymore after he and other cadets returned from a summer ROTC training exercise and were told they could not wear uniforms on campus.

“This was during the Vietnam War, and there were numerous demonstrations on campus against the military,” says Woodard, who was born and raised in Syracuse. “Demonstrators would throw things on the door of the gym, which is where our offices were.”

Back then, it was tradition for ROTC cadets to have graduation and commission in the Archbold Stadium right on campus; however, during Woodard’s senior year, that all changed. The campus climate was tense due to feelings about the Vietnam War and so commissioning was held off campus at nearby Hancock Field.

“What was really sad was not one university official came to our commissioning, and that left a bitter taste in my mouth,” he adds. “Syracuse is my hometown university, and it was just a horrible feeling.”

After commissioning from Syracuse University in 1970, he served in the U.S. Air Force for five years of active duty, and then four years in the reserve as a search and rescue pilot. He had several deployments in the Middle East and in the Pacific and finished his military career in the Philippines where he ran the flight line in the evacuation of Saigon, and then was a liaison for ROTC in South Carolina.

Woodard and his wife have two sons, Douglas and Jeff, and two daughters-in-law, Noel K. Sior-Woodard ’94 and Lanette Woodard. Noel is a 1994 graduate of the College of Visual and Performing Arts and loved her time at Syracuse, and so did Carol Woodard. They were upset Woodard didn’t have the same feelings for their beloved school, so that is when they contacted the Office of Veteran and Military Affairs (OVMA). Soon after, the Woodard family came to Syracuse in August to learn about how a renewed campus commitment to being the “best place for veterans” had been reinvigorated since their time here in the 1960s. 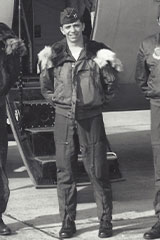 Air Force veteran Stephen Woodard ’70 served in the U.S. Air Force for five years of active duty, and then four years in the reserve as a search and rescue pilot.

“I could not comprehend the difference in SU when we went in August compared to what it was 50 years ago,” Woodard says. “It was the exact opposite—we had two offices in the gym and now there is an entire building—the National Veterans Resource Center.”

Woodard also got to talk to current ROTC cadets and said it was great to share his experience and hear about theirs.

During Woodard’s visit, the OVMA presented him with a degree since he did not get to walk at his graduation.

“It was gratifying to share Syracuse University’s commitment to veterans and military families and all that has been done since his time here,” retired U.S. Army Col. Ron Novack, executive director of the OVMA, says. “Veterans and their families are an integral part of our culture and experience, and they bring diversity, equity and inclusion to our campus.”

While he served during the Vietnam War, he never stepped foot on the ground there, which he says was ironic given how cadets were treated during that time. Despite the hardships he faced before going active duty and then during the isolating times of search and rescue missions, he was grateful for his time in the military and remembers his fellow service members who were lost in the line of duty.

“I lost probably 10% of my flight class,” he says. “It’s tough in the military… it’s not only tough on you but sometimes it’s harder on the families.”

His father also served in the military as a U.S. marine in Iwo Jima. He says the recent events in Afghanistan brought back memories of PTSD and he’d think about his dad’s service. “It’s so much different now with no draft and an all-volunteer force,” he says. “It’s hard for others to understand.”

Woodard and his wife now call Woodstock, New York, home, and also live outside Myrtle Beach, South Carolina, now. Their service in helping others still thrives as both were firefighters in Woodstock for 30 years. “It was very rewarding because we saved a lot of people,” he says.

Syracuse University now has a whole new meaning to Woodard. “It’s great to have an institution like the National Veterans Resource Center where those who transition out of the military have a place to go to,” he says. “The NVRC helps bridge that gap which is invaluable to any veteran.”