On any given day, the Earth’s crust violently ruptures and heals scores of times all across the planet, though most of us would never know it. That’s because it generally takes place deep underwater in a band running around the globe, called the Mid-Ocean Ridge. This summer, a group of faculty, graduate students, undergraduates and alumni got up close to the phenomenon in one of the few locations where it happens right on land: Iceland. Volcanoes are of special interest to researchers because they can be directly involved in the formation of mineral resources as well as geothermal power. 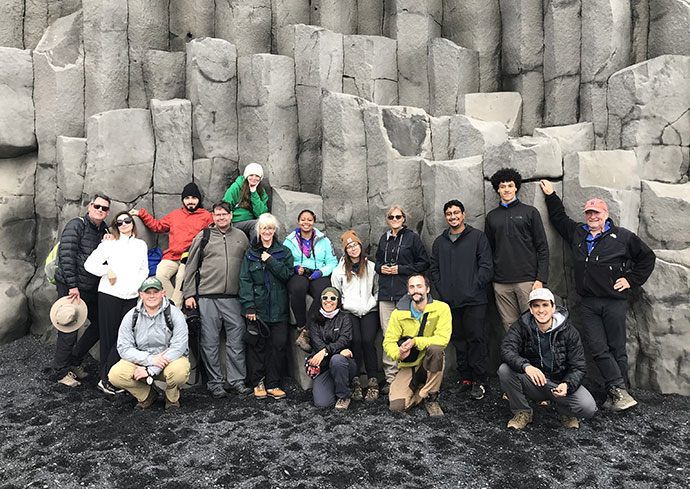 Jeffrey Karson, professor of Earth and Environmental Sciences, describes the process like this: “Two of the Earth’s lithosphere plates—large blocks of the outer part of the Earth—are being pulled apart. New crust is being produced to fill the resulting gap. This is happening all around the planet, and it is very obvious down the middle of the Atlantic Ocean.”

As the Earth pulls apart, it cracks, and the crack is filled with igneous material—magma, if underground, or lava, if erupting onto the surface. Iceland, explains Karson, is a particularly special place to view geological phenomena because it is a “hot spot”—a hyperactive volcanic center. “An unusual amount of heat beneath Iceland results in more magmatism than in other parts of the Mid-Atlantic Ridge,” says Karson. “The volcanoes we see in places like Iceland are helping to heal the fractures formed by the divergence of North American and Eurasian plates.”

The Department of Earth and Environmental Sciences had planned the trip to this iconic geological destination for the previous summer, but had to postpone due to the pandemic. “Our department has a very long and rich history of taking students and faculty together on field trips, including one to Iceland back in the ‘70s,” says Karson. The trips are supported by generous gifts from alumni, many of whom remember their own undergraduate field trips as pivotal in their careers and the highlight of their time at Syracuse University. 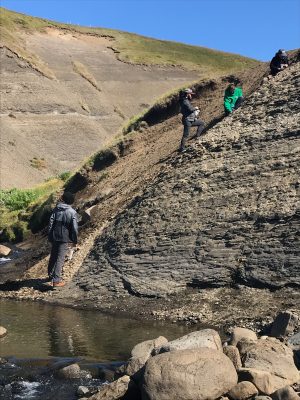 Particularly after a year of virtual learning, “there was a lot of pent-up desire to get out into the world,” says Karson. “There’s nothing like seeing real geological relationships in the field. It’s like a walk through an Earth science textbook.” A key feature of the trip, he says, is the shared experience between students and faculty. “All of us are learners on this trip, together experiencing those things and sharing our perceptions and backgrounds. By bringing faculty members with different specialties, and graduate students working on PhDs, there is a lot of diverse expertise and a lot of eyes on complicated geological features.”

Interestingly, though the group got to witness an active volcano eruption, junior Derick Ramos remembers a visit to a formerly active volcano as the most moving. “Where it had been previously active was an open, wide, big field, filled with black lava,” he says. “Standing where there had been turbulent activity at one point, but now is very quiet and very open, you feel like you’re on another planet, but you’re on Earth.” A geology major, he credits the trip with firming up his commitment to the field. “It expanded my horizon,” Ramos says.