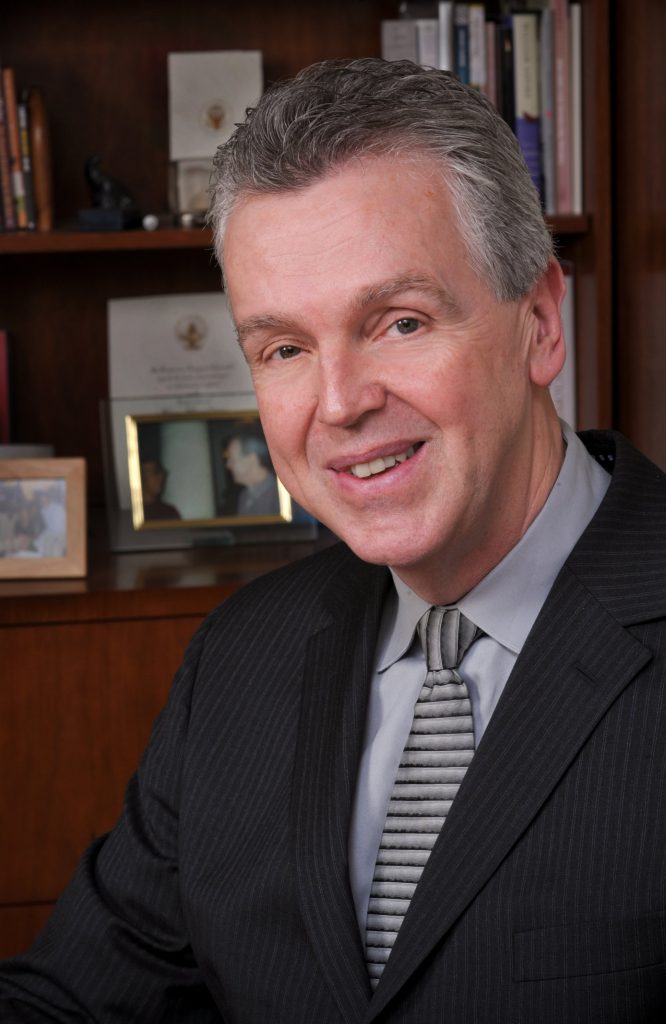 Passion and creativity are at the heart of great storytelling. Those who knew Tom Walsh G’84 would say he wove each of those qualities into his work both in theater, and fundraising and alumni engagement at Syracuse University. Walsh, who passed away in May 2019 following a long battle with cancer, was a lifetime supporter of the arts and literature. To honor his legacy, a scholarship has been established in his name through a donation by Newhouse School alumnus Jonathan Resnick ’89 as part of the University’s Forever Orange campaign. The scholarship will support the next generation of storytellers in the new creative writing undergraduate program in the College of Arts and Sciences’ Department of English.

While Tom Walsh would spend most of his professional career raising funds for Syracuse University, it was an interest in theater that first drew him to the Hill. After receiving a bachelor’s degree in English from Le Moyne College in 1971 and teaching at Christian Brothers Academy in Syracuse for three years, he enrolled in the College of Visual and Performing Arts, receiving an M.F.A. in stage directing. In 1979, he joined Syracuse Stage as the founding dramaturg, main stage director and producer.

Walsh would turn to the student-facing side of the University in 1987, accepting a position as an events administrator for the Division of Student Affairs, working with students in staging dance, music, theater and other cultural events on campus.

Four years later, Walsh joined the development team at the University, becoming director of major gifts for Washington, D.C., and in 1995 expanded his responsibilities with a dual appointment as senior director of development and director of federal relations in the Office of Government and Community Relations. He was appointed assistant vice president for development and public affairs for New York City in 1999, where he led efforts to expand and strengthen the University’s fundraising, public and alumni relations, and marketing activities in the greater New York area. In 2002, Walsh was named vice president of leadership gifts and in 2005, was appointed senior vice president of institutional advancement.

In his nearly 40-year career at Syracuse University, Walsh secured over $7 million in federal research appropriations for faculty, played a key role in bolstering the role and presence of the Lubin House in New York City and helped lead the highly successful $1 billion “Scholarship in Action—The Campaign for Syracuse University.”

“Tom was passionate about Syracuse and saw the University from the perspective of not just an employee, but also a student,” says Ter Molen. “He was a smart, driven and creative person whose legacy and commitment to Syracuse will forever be remembered.”

A Master at Motivation

Charles Merrihew, vice president of administration and engagement, worked with Walsh for 10 years during a time when Walsh oversaw the division charged with institutional fundraising and alumni engagement. He calls Walsh a mentor, and says his big-picture vision and confidence that he instilled in his team helped their group achieve the goals of the division and the University.

“Tom was never one for the details on what was actually required to deliver on some of his ideas—he assumed that he had hired smart people who would ‘figure that all out’ and he empowered them to ensure they always did,” Merrihew says. Walsh’s keen sense of assessing the talents of individuals that could work together as a team—a skill he developed when assembling the cast and crew for plays as a stage director—produced desired outcomes at the University.

In an interview in the Fall/Winter 2017 edition of Syracuse University magazine, Walsh acknowledged that he often drew upon his previous experiences as a dramaturg when motivating those around him. Like with any great performance where each cast member plays an important role, he believed teamwork in any professional setting was vital to success.

“New buildings, academic programs and scholarships happen because everybody involved is playing their part brilliantly,” Walsh said in that interview.

According to Merrihew, Walsh laid a robust groundwork for fundraising which ensured the University was well-positioned for future growth.

Supporting Creativity in Arts and Sciences

The scholarship will be awarded to one student each year enrolled in the Department of English’s new creative writing major. Launched in Fall 2021, the 30-credit major is designed to develop students’ skills as writers and readers of creative nonfiction, fiction and poetry. Coursework includes literature, creative writing workshops and craft classes. They will address the challenges of the literary process with their fellow writers under the guidance of highly accomplished faculty authors, including Chanelle Benz, Mona Awad, Dana Spiotta, Jonathan Dee, Brooks Haxton, Bruce Smith, Matt Grzecki, Sarah Harwell and Christopher Kennedy.

Sarah Harwell, associate teaching professor of English and associate director of the creative writing program, says the scholarship in memory of Tom Walsh will help to strengthen the study of the arts and literature at Syracuse University for many years to come.

“The creative writing major is founded on the tenet that great literature needs a diverse group of voices in order to portray a wide variety of human experiences,” she says. “This much-needed scholarship will make sure that a talented student will get the chance to learn how to tell their story.”

College of Arts and Sciences Dean Karin Ruhlandt adds, “Across all A&S programs, students develop their capacity for critical thinking and ethical action. This is especially true in the creative writing program, whose faculty and students seek to address the challenges we face today through the art of writing. We thank Jonathan Resnick for his generous gift, which honors Tom Walsh’s lifelong commitment to this University and the arts. The scholarship in Tom’s name will support the creative work of A&S student writers long into the future.”

In a 2017 interview, Walsh said, “We’re out on the edge of a noble cause working for education, on behalf of students and faculty who are trying to create knowledge. It’s a gift—something very special we’ve been asked to participate in.” Now, thanks to a gift to the University in his name, future award-winning authors will learn how to perfect their craft and create knowledge of their own at Syracuse.

If you wish to honor the memory of Tom Walsh with a gift in support of undergraduate students majoring in creative writing, visit the Thomas J. Walsh Scholarship website.