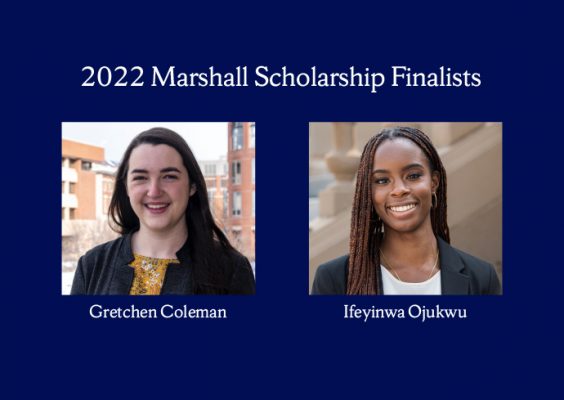 Syracuse University seniors Gretchen Coleman and Ifeyinwa Ojukwu have been named finalists for the Marshall Scholarship, one of the United States’ most prestigious nationally competitive scholarships.

The Marshall Scholarships finance young Americans of high ability to study for a graduate degree in the United Kingdom. Up to 50 scholars are selected each year to study at the graduate level at a U.K. institution in any field of study. As future leaders with a lasting understanding of British society, Marshall Scholars strengthen the enduring relationship between the British and American peoples, and their governments and institutions. The selection of this year’s scholars will be announced in early December.

Coleman is a political science and political philosophy major in the Maxwell School of Citizenship and Public Affairs and the College of Arts and Sciences. She is a Coronat Scholar and a member of and a peer mentor with the Renée Crown University Honors Program.

Coleman is passionate about election reform, voter outreach and expanding access to the ballot. In her home state of Illinois, she has worked extensively at the grassroots level to encourage voting and to make election information accessible. She is the founder of Ballot Z, a youth voter outreach initiative. Coleman has also volunteered with various campaigns in Illinois and served as an election judge at her local polling places. She is currently researching political trust among young people.

Ultimately, Coleman plans to take a position in a county election office as an assistant county clerk. She aims to work for two to three years to gain insight into why problems arise in election administration and then transition to the nonprofit sector to address these issues through advocacy. She plans to join and ultimately lead a nonprofit organization that lobbies government to enact democratic reforms.

“If I were to win a Marshall Scholarship, I would be a much more effective advocate for having studied in the U.K. Beyond developing skills and knowledge from studying democracy and communications, the exposure to British politics would shape my advocacy strategy in the U.S.,” Coleman says. “By learning from British activists and their approaches to political change, I want to expand the potential methods for U.S. electoral reform in my arsenal. Democracy reform can and should be an area for transnational collaboration, and I want to continue cultivating that exchange.”

Ojukwu is a biology and psychology major in the College of Arts and Sciences with a minor in public health in the Falk College of Sport and Human Dynamics. She is a Coronat Scholar, a 2021-22 Remembrance Scholar and a member of the Renée Crown University Honors Program. She is a research assistant in the Middleton lab at SUNY Upstate Medical University, studying a rare neurodegenerative disorder. She has also performed research at the University of Pennsylvania Perelman School of Medicine.

Ojukwu has been a student leader in contributing to the University’s diversity and inclusion-related objectives. She proposed and advocated for the creation of a new course centered on the intersections of race and health. The course Race, Health and Healthcare (SOC 300) was offered in the Spring 2021 semester. She is a member of the biology department’s Inclusion, Diversity, Equity and Accessibility (IDEA) Committee, and provided key insights to the University’s Office of Diversity and Inclusion as it planned the University’s inaugural Race and Equity Academic Symposium held in February, for which she was also a presenter.

If selected for the Marshall Scholarship, Ojukwu plans to pursue a master’s degree in precision medicine (PM) at University College London. Upon completion, she would pursue a combined M.D./MPP (master’s of public policy) program in the United States.

“Formal training in precision medicine, which is poised to shape the future of health care, would give me a perspective beyond the traditional medical framework,” she says. “Ultimately, I want to serve as a bridge between PM research, clinical practice and health policy to disrupt race-related health disparities as both a physician and health policy advisor.”

Ojukwu is particularly interested in the development and equitable expansion of biobanks in the U.S., including the All of Us Research Program biobank at the Mayo Clinic in Rochester, Minnesota, the country’s largest-ever endeavor in PM research. “Given the U.K.’s leadership in both PM and biobank development, the connections and insights I could gain as a Marshall Scholar would be integral to my future work. I also aim to help facilitate future U.S./U.K. collaborations on biobank supported research.”

Both Coleman and Ojukwu worked with the Center for Fellowship and Scholarship Advising (CFSA) as they developed their applications for the Marshall Scholarship. “Gretchen and Ify are extraordinary students and outstanding leaders on campus and in their wider communities. They work in very different fields—political science and biology—but they share a passion for challenging research and for applying their scholarship to promoting positive change in the world. They each have a strong rationale for graduate study in the U.K. so are excellent candidates for the Marshall Scholarship,” says Jolynn Parker, director of CFSA. “It has been an absolute joy to work with them through the application process, and we’re so proud that they have been selected as finalists. Being selected as a finalist is itself a tremendous honor in this competition.”