Campus Community Invited to the Nov. 3 Celebration of the Daniel and Gayle D’Aniello Building, Home to the National Veterans Resource Center 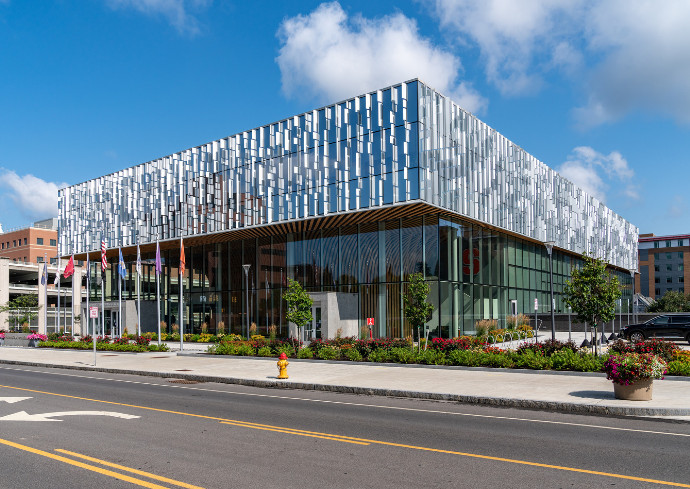 The University’s National Veterans Resource Center at the Daniel and Gayle D’Aniello Building will be officially dedicated on Wednesday, Nov. 3.

While a grand opening celebration in April 2020 was sidelined due to the pandemic, the University’s National Veterans Resource Center (NVRC) at the Daniel and Gayle D’Aniello Building will be officially dedicated on Wednesday, Nov. 3. The campus community is invited to attend the event, which will take place from 3 to 4:30 p.m. in the K.G. Tan Auditorium at the NVRC.

A center of research, innovation and programming in support of our nation’s veterans; a community hub for student veterans and the entire campus; and a beacon to all who have served this country, the NVRC is a first-of-its-kind facility that advances the economic and wellness concerns of the nations’ veterans and their families.

The dedication of the NVRC, which builds on Syracuse University’s long-standing commitment to the veteran and military-connected community, celebrates another important milestone in the University’s history in connection with our country’s service members.

Several years in the making, the D’Aniello Building began to fill with staff and opened to the campus community in early February 2020, but the pandemic and public health guidelines necessitated a postponement of a planned dedication. 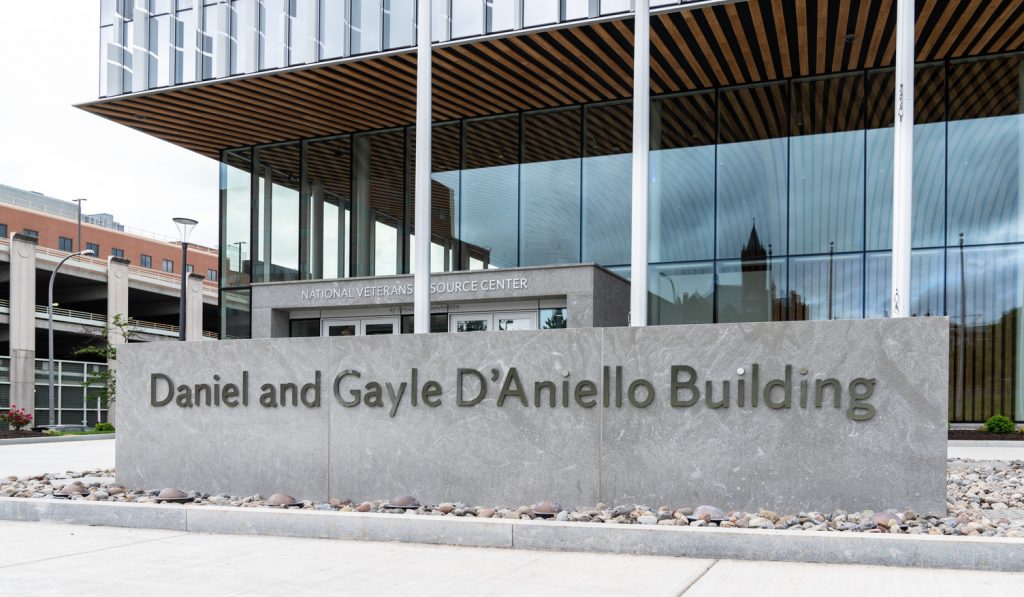 The National Veterans Resource Center at the Daniel and Gayle D’Aniello Building brings together the University’s veteran and military-related programs.

Bringing together the University’s veteran and military-related programs, the facility houses the University’s Institute for Veterans and Military Families (IVMF) that conducts national training around the country, the Office of Veteran and Military Affairs that is the front door for any student veteran or military-connected member need on campus, both Army and Air Force Reserve Officers’ Training Corps (ROTC), the Department of Veterans Affairs “Vet-Success on Campus,” Veteran Career Services, and office space for local, county and state government veteran representatives and community-based veterans organizations.

Officials expect tens of thousands of veterans per year will receive training and support through programs at the new facility, either in person or online.

“This new building is the result of the hard work and effort of many people, and builds on the University’s storied history of support to our nation’s veterans and their families. It has been wonderful to witness staff and faculty, ROTC students, student-veterans and researchers make their new home here,” says J. Michael Haynie, vice chancellor for strategic initiatives and innovation and IVMF founder. “We’re excited to welcome all members of the campus and local community—as well partners from around the nation—to this first-of-its-kind center, created specifically to elevate research, educational programs, and community collaborations that advance opportunity for our nation’s veterans and military-connected families.” 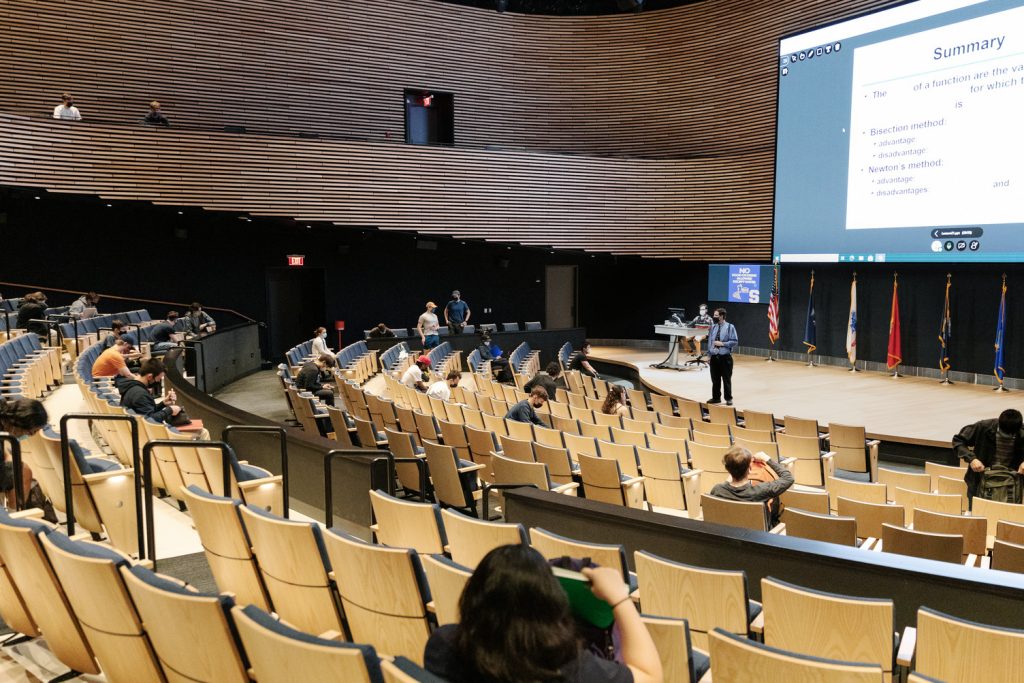 Along with classrooms and offices, the 115,000 square-foot center also features a 750-seat auditorium, the K.G. Tan Auditorium.

The building is named in honor of U.S. Navy veteran and Life Trustee Daniel D’Aniello ’68 and his wife, Gayle, who provided a $20 million gift in support of the construction of the facility. D’Aniello, co-founder and chair emeritus of The Carlyle Group, earned a bachelor’s degree from what is now the Martin J. Whitman School of Management.

The NVRC represents one of the six themes of the University’s Academic Strategic Plan and a key strategic priority of Chancellor Kent Syverud’s—to distinguish Syracuse as the premier university for veterans, military-connected students and families, with enhanced and expanded programs to help them achieve their academic goals.

In addition, the LEED-certified facility was the first new building constructed as part of the University’s Campus Framework, which works with the Academic Strategic Plan to guide the future of the campus environment and enhance the student experience, integrate accessibility and improve academic and research spaces.

Construction of the building, which was designed by the New York City firm SHoP Architects, began in 2018 and incorporates universal design standards, with ADA compliance, to ensure a welcoming, inclusive space for all veterans and visitors.

Along with classrooms and offices, the 115,000 square-foot center also features a 750-seat auditorium, available as a resource to the entire campus; a rooftop parade field for drill and ceremony training for ROTC cadets; a large event space and a gallery exhibition space. 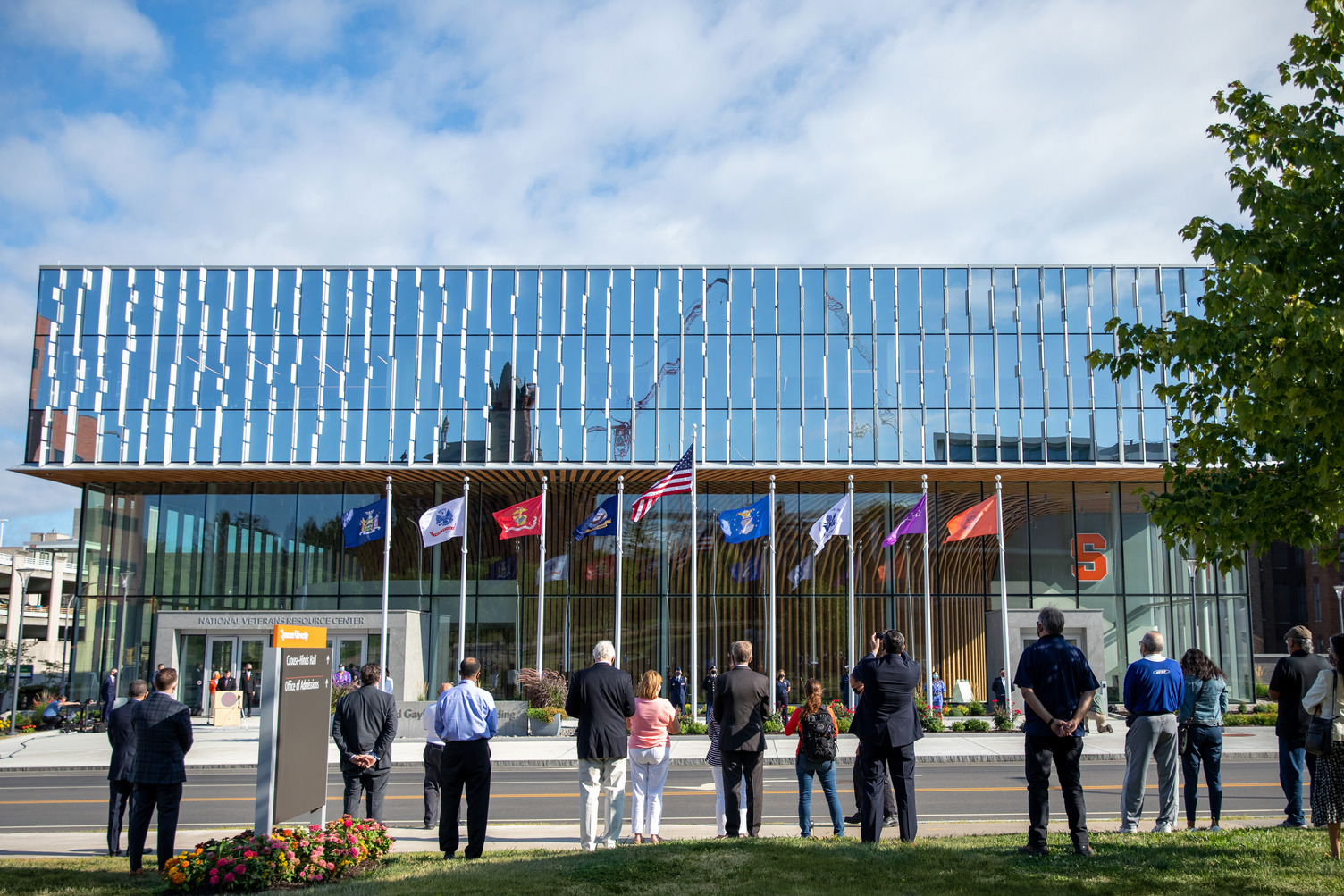 A flag raising ceremony was held in August 2020 at the National Veterans Resource Center.