Mourning the Loss of Sheldon Stone, Distinguished Professor of Physics

Editor’s Note: The following remembrance was prepared by Sheldon Stone’s colleagues in the Department of Physics.

Sheldon Stone, distinguished professor of physics in the College of Arts and Sciences, passed away Oct. 6 after battling a chronic illness for many years. He is survived by his wife and close colleague Marina Artuso, also a professor of physics at Syracuse University, and his four children Jay, Rosalinda, Adam and Tamara. 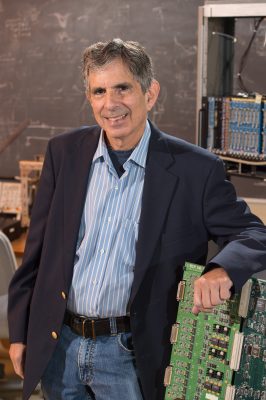 Sheldon Stone was a faculty member in the Department of Physics for 30 years.

Stone was renowned as a particle physicist, and among just a handful of leaders guiding the design and use of enormous particle detectors operating at accelerator laboratories in New York, Illinois and Switzerland. The international scientific collaborations at these laboratories have involved thousands of scientists, engineers and technicians. On a daily basis, they produce a zoo of particles beyond the electrons, protons and neutrons of atoms. These exotic particles are essential to understanding stars, galaxies and the universe.

The research at these laboratories led to the confirmation of the astoundingly successful “standard model” for explaining the properties of particles based on quarks. Stone also sought to illuminate the profound problems that remain. One is the paucity of antimatter compared to ordinary matter throughout the observed universe.

Arts and Sciences Dean Karin Ruhlandt says, “With his colleagues, Sheldon Stone led Syracuse University to its position as one of the world’s leading institutions in experimental particle physics. It is a splendid legacy, and he’ll be sorely missed.”

Stone, a native of Brooklyn, received a B.S. in physics from Brooklyn College in 1967 and a Ph.D. in physics from the University of Rochester in 1972. He was a physics professor at Vanderbilt University from 1973-79. In 1979, Stone became a senior research associate at Cornell University, which was then developing the CLEO experiments at its Wilson Synchrotron Laboratory. In 1991, Stone began his 30-year career at Syracuse University as a professor of physics. He was designated a distinguished professor in 2012. Over his career, Stone was the advisor and mentor for hundreds of doctoral students and postdoctoral researchers, many of whom have gone on to distinguished careers around the world.

Stone’s professional honors have included his selection as a Fellow of the American Physical Society and his Chancellor’s Citation for Exceptional Academic Achievement at Syracuse. In 2019 he was awarded the annual W.K.H. Panofksy Prize in Experimental Particle Physics. Several previous recipients later won the Nobel Prize. The citation for Stone’s prize reads “for transformative contributions to flavor physics and hadron spectroscopy, in particular through intellectual leadership on detector construction and analysis on the CLEO and Large Hadron Collider beauty (LHCb) experiments, and for the long-standing, deeply influential advocacy for flavor physics at hadron colliders.”

Chris Parkes, spokesperson for the ongoing LHCb collaboration of about 1,000 physicists at the CERN laboratory in Switzerland, has written: “Sheldon was a huge force across all aspects of the experiment. He leaves behind him an enormous legacy of innovations and important contributions to our field. More than this he was a great friend and colleague to all of us.”

A public celebration of Sheldon Stone’s life and career will be held later in the year. In the meantime, friends and colleagues are invited to share their memories.