James Lyons ’03, one of the first Syracuse University alumni killed during Operation Iraqi Freedom, was inducted into the University’s National Veterans Resource Center’s Hall of Honor on Oct. 15. He was also recognized as the “Hometown Hero” during halftime at the Syracuse football game against Clemson University later that same day.

Lyons, a biochemistry major and active participant in the Syracuse University Ambulance Corps and Army Reserve Officer Training Corps, is remembered for going above and beyond to serve others. 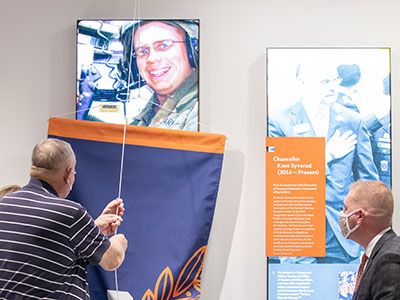 Bob Lyons unveils the tribute to his son, James, inducted into the University’s National Veterans Resource Center’s Hall of Honor on Oct. 15.

Bob Lyons, James’ father, says he’s honored his son is being inducted into the Hall of Honor. “I was really blown away when I heard the news,” says Bob Lyons, who attended the event with his wife, Marcia. “When I’m gone, he’ll still be honored there. And I think that’s just wonderful. I don’t know how to say how much it means to me.”

“We miss him every day, especially as we get older since he was our only child,” says Bob Lyons, who has been a volunteer firefighter at the Brighton (New York) Volunteer Fire Department for “most of his life.” James Lyons, who grew up following his dad to many fire calls, loved the outdoors and was a Boy Scout.

James Lyons was well liked by his classmates, his father recalls. In school, he stood up to bullies and was elected king at his junior prom. “He had girls bugging him since the sixth grade,” says Bob Lyons.

Bob Lyons says his son was a talented athlete that gravitated toward defense. He played middle linebacker in varsity football and was a lacrosse defenseman at Brighton High School near Rochester. James Lyons finished high school at Vermont Academy as an All-New England lacrosse player in 1998. “He went to Syracuse University because he was going to play lacrosse, and then got hurt and never played,” Bob Lyons says.

James Lyons was inspired to pursue service when he attended a pair of immersion trips. The first was before graduating high school, when he visited Houston and was introduced to the medical profession. Later at Syracuse University, he decided he was going to take an EMT class offered in his biochemistry degree program. He loved the work and became an active member of the Ambulance Corps, helping people the way his father did as a volunteer firefighter.

The second trip was to Washington, D.C., during his sophomore year at the University. James Lyons was active in ROTC and attended a “staff ride.” “He got to sit in a tank and just loved it,” says his father.

After the attacks on Sept. 11, 2001, James Lyons felt like it was his calling to pursue the military as a career.

The day after he graduated in 2003, James Lyons went to the Military Entrance Processing Station and, after completing a summer course, shipped out to Fort Sill in Oklahoma for basic combat training. He would go on to commission as a tank platoon leader.

As a tank commander, James Lyons led a crew from a small, cramped space inside a tank. The unfriendly confines weren’t enough to dissuade people from wanting to work with him. “He said ‘Dad, what should I do? Everybody wants to be in my platoon,’” says Bob Lyons.

James Lyons was a successful leader because he put people first. While serving in Iraq, he was tasked with going door to door and confiscating weapons. One blunderbuss, that wasn’t a viable weapon, was also a family heirloom. The Iraqi family was upset, so he got permission to return it. “That shows the caring that James had for people,” says Bob Lyons.

During his final rotation in September 2006, James Lyons was on a quick reaction force that responded to a group of insurgents gathered at a farmhouse. He led the attack from his tank and was shot and killed by a sniper. He was 28 years old. He was highly decorated at the time of his death, having earned the Bronze Star, Purple Heart and Meritorious Service Medal, among other honors.

Bob Lyons accepts an award on behalf of his son, James, recognized as the “Hometown Hero” during halftime at the Syracuse football game against Clemson University on Oct. 15.

The communities that knew James Lyons created several scholarships and awards that continue his legacy of service to others.

One of the Lyons’s neighbors gave a large donation to the Brighton Fire Department in James’ memory. It inspired others to also donate and the fire department set up a scholarship dedicated in his memory. Annually, applicants that are going back to school and exemplify the values James Lyons lived by are awarded $1,000 scholarships.

Every year since 2015, the Syracuse University Ambulance Corps gives the James Lyons Citizenship Award to a graduating member who demonstrates exceptional service to others and is dedicated to the betterment of people in their daily lives. His uniform patches are still on display at the Syracuse Ambulance headquarters to this day.

On campus, his legacy is carried on through the James Lyons ’03 Sons and Daughters Memorial Scholarship Endowment. The scholarship helps support military children, with preference given to first-year students and is renewed through senior year.

Adia Gist ’21 was awarded the scholarship in 2020. Her father served in the U.S. Army for the past 29 years. The scholarship, combined with her father’s Post-9/11 GI Bill, financed her degree. “Honestly if it wasn’t for my scholarship, I would not have been able to go to a school like Syracuse University,” she says. “I’m very blessed that I’ve been able to do that.”

With the help of the scholarship, Gist was an active member of the campus community. She was involved in the WellsLink Leadership Program, which allowed her to work with a mentor. She danced for three years on campus with Creations Dance Company. She completed two internships, including one her senior year at Hearst Magazines. Gist also volunteered her time with the engineering ambassadors program visiting middle schools to introduce students to beginner engineering projects.

Gist has graduated and currently works for Hearst magazines. “And so, it is full circle for me to still be at Hearst in the magazine section. And I feel like I’m one step closer to being in the entertainment and media field,” says Gist. “It wouldn’t have been possible without having the scholarship.”