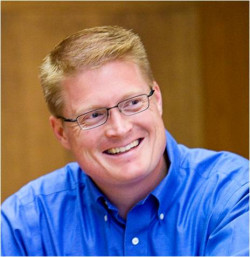 John Burse ’94 first stepped foot on the Syracuse University campus as a high school senior in the late 1980s with dreams of becoming an architect. He recalls stepping onto the Quad for the first time and knowing in that moment, “this is where I wanted to go.” That single powerful experience set the foundation for a lasting relationship between Burse and the University that has been thriving ever since.

After earning a B. Arch. degree from the School of Architecture, Burse launched a successful career with Mackey Mitchell Architects, based in St. Louis, Missouri, that has spanned 24 years. He currently serves as design principal for the firm’s higher education practice. His passion is design rooted in community; Burse’s early career specialized in town planning and urban design and has evolved toward a concentrated focus on college and university design, with expertise in campus life facilities.

When a renovation of the Hildegarde and J. Myer Schine Student Center was green-lighted under Syracuse University’s Campus Framework in 2017, Burse quickly moved into action to bid on the opportunity to play a role in a massive campus life project with his beloved alma mater.

“As soon as the Schine opportunity came up, I called a former classmate of mine, Matthew Broderick [president and CEO at Syracuse-based firm Ashley McGraw Architects], and said ‘Matthew, we have to work on this project together! Let’s form a team and pursue it,’” Burse says. 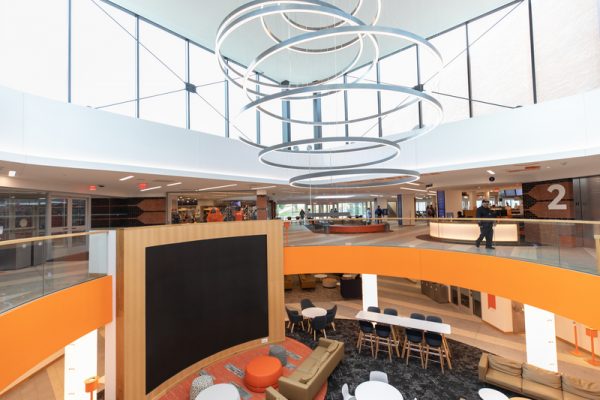 An interior view of the renovated Schine Student Center, unveiled earlier this year.

After an RFP process led by the Office of Campus Planning, Design and Construction, the joint project team of Mackey Mitchell and Ashley McGraw was ultimately awarded the design component of the project, with LeChase Construction selected as the general contractor.

“As you might imagine, to have my firm and another alumni-led firm selected to plan and design Schine’s renovation was both a profound honor and responsibility,” Burse says. “For me personally, it’s an absolute career highlight.”

Having worked on the design of dozens of student centers and unions throughout his career, Burse speaks of this work as an exceptional undertaking. “One becomes a sort of surgeon specializing in improving the vitality of social hearts of campuses,” he says. “As designers, we really need to understand the student experience. How are students living their lives on campus? How are they interacting with the building? Where is it stacking up well and where is it falling short?”

These lines of inquiry led Burse, Broderick and their joint design team to solicit student input at numerous points in the design process. Their input highlighted the need for increased connectivity among the various student organizations, activities and resources that were co-located in Schine, and easier wayfinding to aid students’ discovery of what they’re looking to get out of their college experience—or perhaps things they don’t even know they’re looking for, as Burse points out.

“One thing we looked at was how to infuse the space with a sense of serendipity, fostering spontaneous interactions and allowing for collisions with new ideas and new ways of thinking,” he says. “We also thought about how the building contributes to ‘threshold moments’—like the one I had stepping onto campus the first time so many years ago—and ‘backdrop moments,’ things like meeting a spouse, discovering a new passion, or finding an opportunity for citizenship or leadership that changes the trajectory of one’s life. You really have to wear many different lenses when thinking about these kinds of spaces.”

The physical transformation of Schine—which above all else is centered on accessibility, connectivity and reestablishing the building’s place as the true “heart” of campus— was completed and the building reopened to welcome students earlier this year. A virtual tour is available for those who have not had the opportunity to visit the student center since its renovation.

A Stroll Down Memory Lane 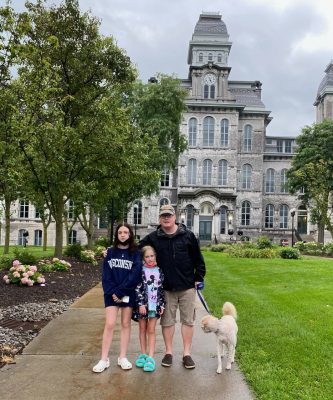 Burse and his family pose in front of the Hall of Languages during a campus visit.

Returning to campus to work on Schine evoked memories of and comparisons to Burse’s own time spent as a student on campus. When he arrived in the late 1980s, the Schine Student Center was a new building, having opened in 1985. Burse recalls Schine as a “teeming place” during his undergraduate years and was surprised to see that the building had lost its relevancy as a campus hotspot, and especially surprised to see the emergence of Club Bird on the main floor of Bird Library as the “social hub” of campus. “As someone who worked at Bird for all five years I spent on campus, that really blew me away, to see its social vibrancy,” he says.

Burse was wowed by the Barnes Center at The Arch, which opened during the Fall 2019 semester as a premier health and wellness destination on campus. “My gosh, what an incredible amenity!” he says. “I was on campus at 10 or 11 o’clock on a Friday night and the place was just packed with people.” His inner architecture nerd can’t help but comment: “When you see a building being used so well, that tells you you’re really hitting your target.”

When asked about the fondest memories from his undergraduate career, Burse references time spent and camaraderie formed with his School of Architecture classmates in studio, many of whom he has maintained a relationship with over the years and enjoys reminiscing with about the Syracuse days. “I’ve been blessed to work with some of my former classmates, too,” he says, as was the case with the Mackey Mitchell-Ashley McGraw partnership on the Schine renovations.

Beyond time spent toiling away in Slocum Hall honing his design chops, John spent a semester studying abroad in Florence, Italy, which he reflects on as a profound and eye-opening experience. “Having the veil drawn back on all that there is to absorb in Italy, at that pivotal time in my life, you just can’t beat that experience,” he says. “Spending just one semester there was like drinking from a firehose. Outside the studio and the relationships I built with my classmates and professors, the study abroad experience shaped me the most.”

Shaping the Next Generation of Student Architects

“It’s about giving back,” he says. “I was blessed to have the professors and experiences I had here. There’s a sense of obligation to the profession and to the School of Architecture. A lot was given to me and there are so many different ways to pay that forward to future generations.”