A Gift to Expand Worldviews for Drama and Music Students

Dr. Jason Soifer ’51 was neither a drama nor a music student at Syracuse University. He received a bachelor of arts degree from the College of Arts and Sciences and pursued a successful career in medicine as an anesthesiologist in San Francisco. But he had a deep appreciation for the universal language of the performing arts and the talent his gift is intended to support. 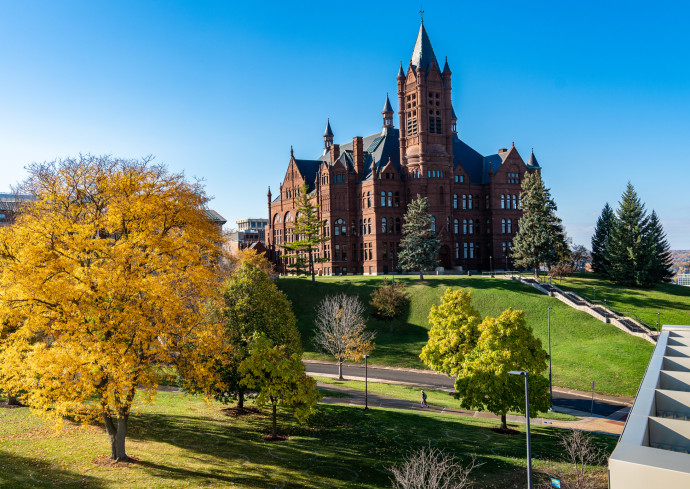 A gift from Dr. Jason Soifer ’51 creates new endowments in Soifer’s name in the Department of Drama to support scholarships and in the Setnor School of Music to support international study and experiences, both in the College of Visual and Performing Arts.

Soifer, who passed away on July 14, 2021, at the age of 91, named Syracuse University the beneficiary of his $2.7 million charitable remainder unitrust. As part of the Forever Orange Campaign, the gift creates new endowments in Soifer’s name in the Department of Drama to support scholarships and in the Setnor School of Music to support international study and experiences, both in the College of Visual and Performing Arts (VPA).

“I had always been stage-struck, gifted with a booming voice, backed up with a lack of talent, but I persevered and ended up in the box office during my four years at Syracuse,” said Soifer in describing the inspiration behind the endowments, during an interview earlier this year. “I trained at Medical School in Amsterdam in the Netherlands and realized how important an international education was, especially in language and to broaden one’s view of life. It can be quite educational to people—watch from a sidewalk cafe in Paris!” Soifer served abroad in the U.S. Army and was stationed in Paris for NATO as its medical head. The endowment to the Setnor School to support international study is intended to give students the same opportunities to absorb new cultures and expand their worldviews.

“This gift is very personal to me,” says Milton Rubén Laufer, director of the Setnor School of Music. Even though Laufer never met the man behind the gift, he appreciates deeply the potential impact of Soifer’s endowment funds to support music and drama students in VPA. “Though I was a promising student, my family couldn’t afford the tuition for me to go to my top choices. It was a scholarship like this one, earmarked for under-represented students, that gave me the opportunity to attend the best schools and travel internationally. I would not be where I am today without those experiences or support.”

Echoing Laufer’s sentiments, Holly Thuma, interim chair of the Department of Drama, also describes the Soifer gift as one of opportunity that “helps us to overcome the inequities many students face.” The Jason Soifer Endowed Scholarship for Drama is intended to provide scholarship and financial assistance to students who will bring diverse perspectives to the dramatic arts. “We are one of the top-rated drama programs in the country,” says Thuma, “but many gifted students can’t afford to come here. We are so grateful for Dr. Soifer’s gift, which offers a real chance to change things.”

Thuma points out that exposure to diverse perspectives and voices is vital to the developing artist. “To become better actors requires empathy, to walk a mile in someone else’s shoes,” says Thuma. “That’s what actors do. We step into someone else’s shoes and walk that life experience. Part of our job is to help students expand their worldview—in acting, directing, designing, all aspects of the performance arts. Diverse voices are part of our art form and we need to expand the stories we tell. The Department of Drama has a strong vision for the future, one in which stories that have long been excluded will be given their due and brought center stage.”

“Cost is the biggest barrier for anyone of talent to come here,” says Laufer. “Scholarship support that brings diverse voices and perspectives to the stage will strengthen the whole college.” Laufer also serves as co-chair of VPA’s Diversity, Equity and Inclusion Committee. “These students could be the next Fulbright Scholar or Grammy winner or Tony Winner, or the next professor or dean. I’m the first person of color to lead Setnor in its 140-year history. It’s not my intention to be the last.”

“I think every Setnor student should have a chance to be on foreign soil,” says Laufer. “It increases our abilities as artists to immerse ourselves, transcend language in many ways and break down barriers. It helps our students develop as human beings and as global citizens. There’s a certain aspect of fearlessness that accompanies international travel and that, too, is an important gift to give our students. In addition, the more our students interact with students from other nations, the more likely we are to get international students here.”

VPA Dean Michael Tick calls the Soifer gift transformational. “Jason Soifer has provided opportunities for current drama and music students and invested in the future of Syracuse University. I am deeply grateful for the ways in which the Soifer endowments will lift up VPA for years to come.”