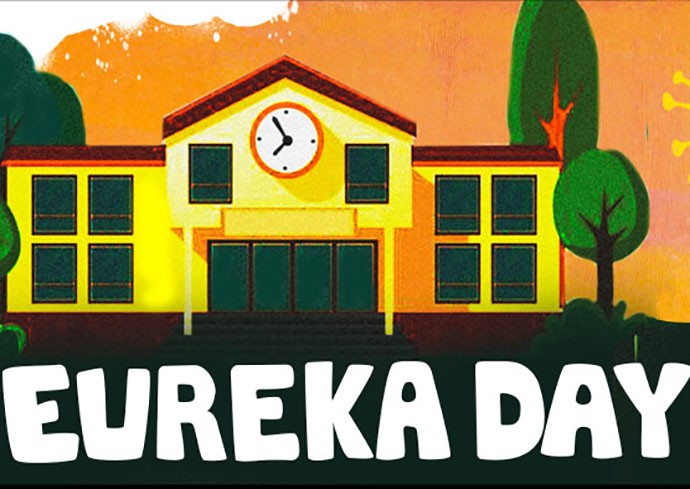 Syracuse Stage is back.

“It’s invigorating to hear and see our theater come to life once again with the energy of amazing actors and imaginative designers,” says artistic director Robert Hupp, who is also directing “Eureka Day.” “Soon, the final part of our theatrical equation, the audience, will join us and we’ll be on our way. It’s not a return to normal, I think normal is in the rear-view mirror. It’s a commitment to the idea that the road ahead is much more interesting, and much more necessary, if we take the journey together,” says Hupp.

The choice to open the season with “Eureka Day” is to embrace the complicated world of the present moment. Though written pre-Covid, Spector’s play plunges headlong into the knotty issue of vaccines by using a mumps outbreak at a private school in Berkeley, California, to expose deep rifts in the school community concerning the issue of requiring vaccinations for the students.

With great humor and empathy for all sides, Spector explores the valiant and sometimes valiantly misguided efforts inherent in attempts to address and reconcile seemingly irreconcilable differences. The degree to which those attempts succeed or fail in turn raises questions about the viability of an institution—or a nation—to operate by consensus. In that regard, setting the play in a day school in Berkeley seemed most appropriate for the playwright because of its history and reputation as a place to that tries so “earnestly” to live its values.

“I think to varying degrees, many of the clichés about the Bay Area and Berkeley specifically, are true: very smart, very to the left, wanting to feel like it is always more to the left than anywhere else because of the legacy of Berkeley in the 60s as a place where so many progressive movements—the free speech movement, the disability rights movement—so many progressive movements got their start. So there is a feeling of always wanting to be at the forefront,” Spector says. “That makes it a particularly interesting place to examine these moments where different sets of values come into conflict and where you reach irreconcilable conflicts to values.”

It is up to five members of the Eureka Day School’s executive committee to confront the crisis set in motion by the mumps outbreak and to determine the best course forward for the school. Bearing the brunt of the discord is the school’s headmaster, Don, played by Jason O’Connell, who returns to Stage after appearing in the online production of “Talley’s Folly” in fall 2020, as well as having portrayed Salieri in Stage’s last live performance, “Amadeus” in March 2020. Joining O’Connell in the cast are LeeAnne Hutchison, who has appeared in the Cold Read Festival of New Plays, and newcomers to Stage Laura Yumi Snell, Drew Hirshfield, Stephanie Weeks and local actor Tanisha Jackson.

Spector started writing “Eureka Day” in 2016. It had its premiere at the Aurora Theatre in Berkeley where it received all of the San Francisco Bay Area’s new play awards: Glickman Award, Bay Area Theater Critics Circle Award, Theater Bay Area Award and Rella Lossy Award. It was subsequently produced by Colt Coeur where it was a New York Times Critics’ Pick, an honorable mention in Time Out New York’s Best Plays of 2019 list and was nominated for a New York Drama Critics Circle Award.

“At its core, ‘Eureka Day’ is a funny and moving play about the conflict between personal choice and the greater good,” says Hupp. “‘Eureka Day’ is actually a richer experience today than when it first came to our attention two years ago. What was far-fetched craziness then is reality now; this play, and this production, give us permission to laugh at the absurdity of the world around us and to wrestle with our own feelings about who gets to decide the thorny question of what’s right for our community. The immediacy of theater makes this catharsis possible, and that’s why I am so excited to return to live performance with this prescient and spot-on funny play.”