College of Law alumnus Brian J. Gerling is the new executive director of the Innovation Law Center (ILC). Gerling, who brings nearly two decades of intellectual property and commercial litigation experience to the role, takes the helm from M. Jack Rudnick L’73, who will remain engaged with the ILC as senior advisor. 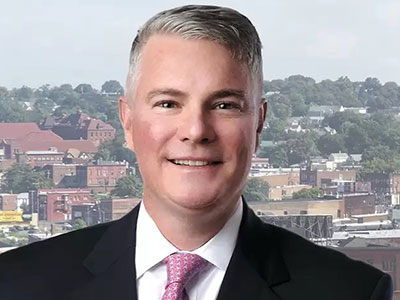 Gerling most recently served the College of Law as an adjunct professor, teaching innovation law and technology law courses. In his new role, he will continue to teach as a member of the College of Law faculty. He also will retain his Of Counsel affiliation with Syracuse-based law firm Bond, Schoeneck & King PLLC, where his practice focuses on IP, data privacy, emerging technology and economic development.

Gerling will work with Professor Shubha Ghosh and the Syracuse Intellectual Property Law Institute to administer the College’s Curricular Program in Technology Commercialization Law Studies. He also will direct the New York State Science and Technology Law Center (NYSSTLC), which is a grantee of the Empire State Development´s Division of Science, Technology, and Innovation.

“As one of ILC’s brightest alums and biggest advocates—and a former student of its founder Ted Hagelin—Brian brings expertise and enthusiasm to the center. His deep and wide-ranging practice experience in IP law, and especially emerging technology, will enrich our students’ educational experiences,” says College of Law Dean Craig M. Boise. “I look forward to working with Brian to build on Jack Rudnick’s remarkable work expanding ILC and NYSSTLC so that our students continue to get real world experience working with a wide variety of technology clients.”

“It is an honor to direct the ILC; it has had such a profound effect on my career. It was my interest in marrying my passion for biotechnology and law that brought me to Syracuse, and Professor Hagelin left an indelible impression on me. I have used the principles and values that I learned at Syracuse Law throughout my career,” says Gerling. “To return to my alma mater in this capacity and to continue Ted’s and Jack’s legacies are both a privilege and deeply satisfying honor. I look forward to working with students interested in technology commercialization and the innovation economy and giving them the skills and practical tools they need for successful careers.”

Jack Rudnick became ILC’s second director in 2013. Since then, he has dramatically increased the number of clients served by the ILC and NYSSTLC, across green and clean tech, biotech, autonomous systems and other industries; expanded the range of innovation ecosystem partnerships among ILC and New York-based economic development organizations; and helped launch graduates into careers at companies such as Deutsche Telekom, Eli Lilly, IBM, Johnson & Johnson, Proctor & Gamble and the US Patent and Trademark Office.