When her son Chase was diagnosed with autism in the summer of 2005, Clarise Shelby-Coleman, who works in Campus Safety and Emergency Management Services as a residential community safety officer, searched for community support and resources that would empower her with a better understanding of Chase’s diagnosis so she could help him live a full and fulfilling life. 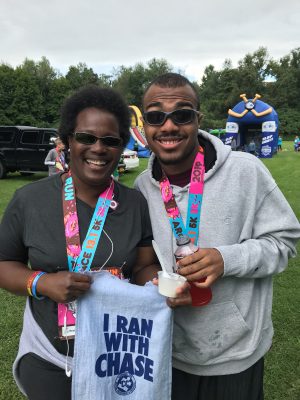 Clarise Shelby-Coleman and her son, Chase, at an ARC of Onondaga race in 2019

Back then, autism spectrum disorder, which encompasses a range of conditions related to individual differences in sensory, perceptional and cognitive processes, was not as broadly shared, discussed or celebrated as it is now. “When Chase was diagnosed in 2005, the chances of being diagnosed with autism were 1 in 151. Today it’s 1 in 68, and 1 in 45 for males,” Shelby-Coleman says. “Tomorrow a caregiver will get a diagnosis and wonder, as I did, ‘where are all the adults with autism? How do I prepare him for this world?’”

An attempt to join a local support group for parents with children on the spectrum didn’t feel like a good fit for Shelby-Coleman—so she made her own path.

Propelled by the incredible tenacity that is pervasive in her spirit, Shelby-Coleman spent the next 11 years accumulating knowledge, wisdom, tools and resources on her own, as she advocated for Chase and worked to ensure he had every opportunity to achieve his goals and dreams.

“People call us ‘helicopter moms’ … well, I’m an F-16,” she says. “I knew that if I could teach him how to navigate the world, then he eventually would be able to teach the world, ‘this is how you deal with me. This is how Chase is.’”

All along in the background, Shelby-Coleman was considering the idea of starting her own support group for caregivers, knowing how she had struggled to find community upon Chase’s diagnosis. “But something awful had to happen to him for me to really get to it,” she says. In 2016, when Chase was 15 years old, he was running with his team from Corcoran High School in a cross-country meet in Rochester, New York, when he was assaulted by a stranger. 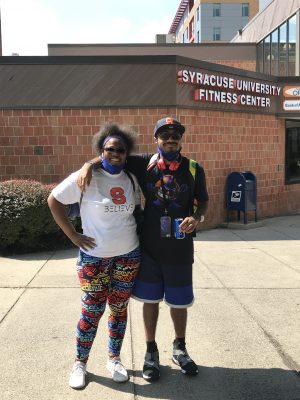 Clarise and Chase before a workout at the Syracuse University Fitness Center in the summer of 2020.

The incident was widely publicized and spotlighted issues of both racial prejudice and ableism toward Chase. Shelby-Coleman says she was frustrated that even the police officers who responded to the scene and were trying to help her didn’t quite understand Chase or how his autism affected his perception of and reaction to the assault.

Unexpectedly, Chase and his differing abilities were receiving national and international attention and Shelby-Coleman found herself saying, “I know I’m not the only parent going through this.” She started putting her plan into action to make sure that no parent of an autistic child would ever feel as alone as she did in the aftermath of Chase’s assault.

Shortly thereafter, Shelby-Coleman founded Show Them How Smart You Are, a nonprofit organization focused on support and advocacy for parents and caregivers of children with autism in the Central New York community. The name comes from a sentiment that she began saying to Chase daily at age 4, following his diagnosis.

Show Them How Smart You Are is a beacon of light and hope for children with autism in Central New York and those who love and care for them. Shelby-Coleman leads a support group for parents, grandparents, teachers and therapists, and others who have been touched by autism every other Saturday on Zoom.

“Our group is multi-ethnic, multi-racial, we have different economic statuses, different professional statuses, some of us are stay-at-home moms and our children range from about ages 3 to 37,” Shelby-Coleman says. “When we come together, we can talk about things that we wouldn’t necessarily talk about with our friends who are parents of neurotypical kids.”

Shelby-Coleman also shares her own wisdom, stories, support and information with the caregivers in her group, which numbers around 25-30 at any given time. Advocating for individualized education plans (IEPs) and special education support within the schools, sharing contact information for local professionals that work well with autistic children (i.e., pediatric dentists) and connecting people with local events and other organizations that contribute to a high quality of life for kids on the spectrum are all under the purview of Shelby-Coleman’s mission.

Show Them How Smart You Are also puts on numerous events each year, including a parents’ brunch to offer them much-needed respite; a fun run with Chase, who is still an avid runner; and a skills fair that helps introduce autistic children to hobbies and interests that could potentially become careers down the line.

“Clarise creates this incredible chain reaction of love and support for families like mine,” says Carol Masiclat, a member of the group. “Since meeting her, I’ve felt more confident in my advocacy for my son, and it inspires me to support other parents. She has given me advice on everything. You can’t Google what she knows.” 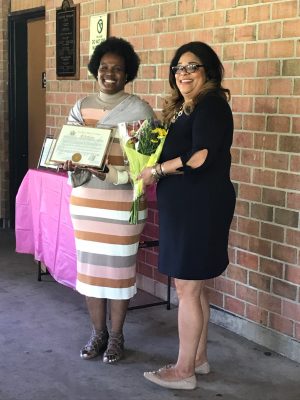 This past May, Shelby-Coleman was honored as an Exceptional Woman of Central New York in the community service category by Assemblywoman Pamela J. Hunter for her work with Show Them How Smart You Are. Two parents from her group nominated her for the award. “Receiving that award was very special to me,” Shelby-Coleman says. “I just don’t think about me. I try to think about everyone else, so to be honored in that way made me think, maybe I’m getting something right.”

One thing she is certainly getting right? Parenting her son, Chase, who is now 19 years old and recently graduated from the Institute of Technology at Syracuse Central High School’s media studies program. He is preparing to enter InclusiveU, an initiative of the Lawrence B. Taishoff Center for Inclusive Higher Education at Syracuse University, where he dreams of receiving a media certification from the Newhouse School. He has an active social life, friends he enjoys hanging out with, and loves running 5K races and spending time at the gym. With his mom’s help, Chase started an inclusive running club on campus, called Run, Walk and Roll with Chase, which meets every Monday and Friday morning at the Huntington Hall Commons and offers several routes for those with varying abilities.

“One of the biggest things for me was, don’t hide our kids,” Shelby-Coleman says. “Coming from the Black culture, there is a tendency when our kids are not ‘normal’ to hide them away from the world … you know, like the eccentric uncle in the back bedroom that no one ever sees. I wanted more for Chase. I knew he wasn’t going to live in an all-autistic world; so I wanted him to have as many inclusive experiences as possible. All he wants is to be included, just like everybody else. I truly believe that inclusion completes the puzzle.”

Show Them How Smart You Are welcomes new members to the support group; they also accept financial donations and occasionally have opportunities to get involved with other events and programs. To learn more, email Shelby-Coleman at smartwithautism37@gmail.com.