Advancing Understanding of the Link Between Pain and Nicotine Consumption

It is extremely rare for a pre-doctoral student to receive recognition and funding from the National Institutes of Health’s National Institute on Drug Abuse (NIDA). That’s why Syracuse University psychology professor Joseph W. Ditre is so incredibly proud of doctoral candidate Jessica M. Powers, who recently received NIH/NIDA funding to support her research into the relationship between pain and use/co-use of e-cigarettes and tobacco cigarettes. 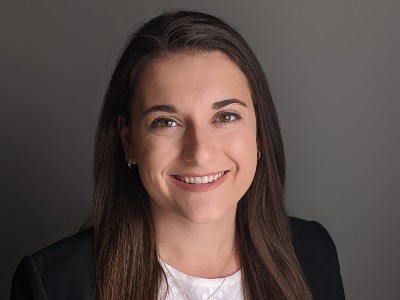 “In her graduate studies, Jessica has already published more on this specific topic than any other researcher,” says Ditre. “An award like this means that NIDA recognizes her exceptional potential to deliver an impactful study that could ultimately help inform the way health care providers treat nicotine-users who are suffering from pain.”

For Powers, the award is not only validation of the importance of her work. It presents an opportunity to broaden awareness of a significant public health problem. The fact is that many people (including clinicians) are not aware that chronic pain (including back, chest, abdominal and limb pain) can be worsened by the intake of nicotine.

“With the growing use of e-cigarettes, it’s critical to understand how pain influences and is impacted by new trends. Pain is an important and unrecognized risk factor in nicotine use and dependence, and we need to specifically study its impact on e-cigarette use,” says Powers. Her funded work will be the first prospective study to test whether pain predicts a greater likelihood of initiating co-use of cigarettes and e-cigarettes, by looking at data from over 30,000 participants in the Population Assessment of Tobacco and Health (PATH) Study launched in 2013 by the NIH and the Food and Drug Administration (FDA).

During her graduate studies at Syracuse University, Powers completed a practicum at a community-based pain treatment center. “More than half of my patients were smoking,” says Powers. “It was a stark reminder of the importance of this research and the need to better understand how pain may make it harder for patients to quit using tobacco and other nicotine products.”

Powers’ work aims to advance the field that attracted Ditre to pain and addiction research when he was a graduate student. “Back in 2004, we were just beginning to understand the link between smoking and pain. We were able to show that pain can promote smoking, partly because smokers often report experiencing pain relief when using nicotine. But with more research, we realized there was a vicious cycle: pain promotes smoking and, over time, smoking increases pain.” Ditre notes that many medical professionals remain unaware of this cycle.

Ditre says that Powers’ research “will allow us to stay ahead of the curve on a landscape that continues to change. If you’re not examining meaningful data in a timely manner, you may miss something important that’s happening and that has implications for the future.”

Powers’ findings may very well help to shape the way health care providers treat patients suffering from chronic pain and those who are dealing with nicotine addiction. It’s rare to find anesthesiologists, physiatrists or neurologists who are pain specialists also focusing on the smoking habits of their patients during pain therapy. But the linkage between pain and nicotine necessitates new knowledge and understanding that could lead to the design of integrated pain therapies. In addition, smoking cessation programs must recognize the importance of pain management for clients to achieve success in breaking nicotine addiction.