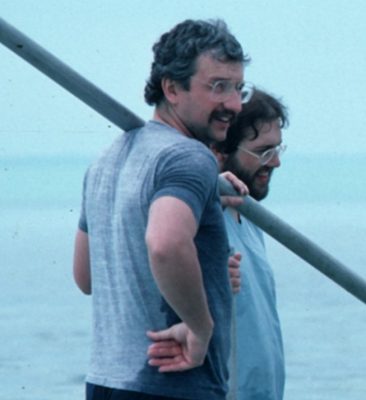 Hank Mullins, a faculty member for nearly 30 years in the Department of Earth and Environmental Sciences in the College of Arts and Sciences (A&S), passed away in July at age 69.

Mullins grew up in the Hudson Valley village of  Ghent, New York, and developed his passion for science at the State University of New York-Oneonta, where he earned a B.S. in geology in 1973. He would go on to receive an M.S. at Duke University in 1975 and Ph.D. at the University of North Carolina (Chapel Hill) in 1978.

In 1977, Mullins accepted a tenure-track assistant professorship in marine geology at the California State University system’s consortium Moss Landing Marine Laboratory on Monterey Bay. There, he diversified scientifically to work on low-oxygen marine environments, coral reefs, lagoons and estuarine systems in many different parts of the world.

Mullins joined Syracuse University’s geology department (now the Department of Earth and Environmental Sciences) in 1983, with a goal to strengthen the research and graduate teaching profile of that department and A&S. He received extensive funding from the National Science Foundation and American Chemical Society/Petroleum Research Fund. As a graduate student mentor, Mullins’ colleagues say he demonstrated a distinctive blend of rigor and personal supportiveness. He was awarded the 1997 College of Arts and Sciences’ William Wasserstrom Prize for Excellence in Graduate Teaching, recognizing a “distinguished scholar whose work is characterized by its originality and distinctive character.”

As editor-in-chief of the premier journal Geology (1990-1995), Mullins strongly influenced the publication of scientific discoveries—including publishing the paper by Alan Hillebrand et al. documenting the find of the Chicxulub Crater—the record of the Cretaceous-Paleogene impact that triggered rapid extinctions of dinosaurs and numerous other groups. For his editorial leadership to the geological sciences, the Geological Society of America honored Mullins with its 1995 Distinguished Service Award.

Mullins retired from the University in 2011, although he continued writing, publishing “Will Population + Technology = Armageddon?” that year, and two books in 2014 exploring earth-sciences themes for the general public: “The Simple Science of Global Climate Change” and “Knowledge for Non-Scientists and Is Gaia God: A Personal Journey.”

In memory of Hank Mullins, gifts can be made to the following: Syracuse University Department of Earth and Environmental Sciences (mark checks “Hank Mullins Student Support-Earth Sciences”) or the Parkinson’s Foundation.