Growing up in Calcutta (now Kolkata) in eastern India, Romita Ray developed a deep appreciation for the iconic Victoria Memorial Hall (VMH) and its exquisite collection of art and 64 acres of gardens. The urban landmark is the most visited museum in India and resides in a city that served as the capital of the British Indian empire from 1772 until 1911. Envisioned as a British imperial repository of art, artifacts, manuscripts and horticulture by Lord Curzon, viceroy of India from 1899 to 1905, the VMH complex memorializes Queen Victoria after her death in 1901. The building’s foundation stone was laid by the Prince of Wales in 1906 and the VMH was formally opened to the public in 1921. 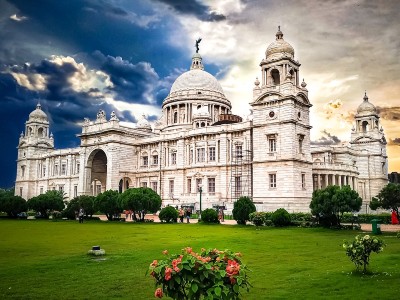 Designed by the British architect William Emerson, who was president of the Royal Institute of British Architects (RIBA), the building was built out of white marble, and its design included Indian architectural elements. Built by the Indo-British engineering firm Martin and Company, founded by Sir Rajendra Nath Mookerjea and Sir Thomas Martin, it was complemented by ornamental gardens laid out by the renowned botanist Sir David Prain who had served as director of Calcutta’s Indian Botanic Garden and the Botanical Survey of India.

Eminent Indian as well as British art collectors, including the maharajas (kings) of Jaipur and Burdwan, Calcutta’s Tagore family and King Edward VII, contributed to the VMH collections of art and artifacts. This Indo-British visual legacy was also shaped by American collectors like New Haven businessman Edward Malley, from whom the maharaja of Jaipur purchased the Russian artist Vasily Vereshchagin’s monumental painting depicting the Prince of Wales’ visit to Jaipur. The maharaja presented the painting to the VMH in 1905. Today, the museum is renowned for its rare Indian, Persian, British and European art, artifacts and manuscripts.

Ray’s connection to Victoria Memorial Hall has now come full circle. The associate professor of art and music histories in the College of Arts and Sciences has been awarded a prestigious Collaborative Research Grant from the National Endowment for the Humanities (NEH) to plan and hold an onsite workshop at the VMH and a virtual symposium, with the aim to unpack the influence of Indian, British and American legacies on the VMH. 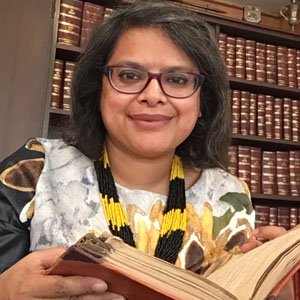 One of only 13 grants awarded this year in the collaborative research category, this award will enable Ray and a team of 15 research scholars from the U.S., U.K. and India to examine how Indians, Britons and Americans shaped the imperial histories of the VMH; explore how objects and plants in the VMH collections and gardens constituted imperial networks of knowledge and collecting; and observe how the architecture and gardens of the Victoria Memorial Hall produced new spaces of imperial identity in Calcutta for its Indian and European citizens. One of the overarching goals is to re-center the Indian histories of art making, collecting, engineering, botany and horticulture in the story of the VMH, and investigate how those histories were placed in dialogue with British and American ones in an iconic imperial institution.

The project was first conceived during a trip that Ray took to Kolkata in 2018, where she met with Tapati Guha-Thakurta, the acclaimed Kolkata-based historian of Indian art at the Centre for Studies in Social Sciences Calcutta, and Jayanta Sengupta, secretary, chief curator and director of VMH. The three discussed how to re-assess VMH during its centenary celebrations in 2021, ultimately deciding to frame the entire project within an investigation of the Indian and North American contributions to the VMH.

“This pioneering project brings together an interdisciplinary team of leading art and architectural historians, literary scholars, curators, cultural historians, garden historians, anthropologists and historians of environmental studies,” says Ray. The scholars hail from Yale University, Brown University, University of California Santa Barbara, University College London, University of Warwick, Royal Historic Palaces, University of Sussex, Centre for Studies in Social Sciences, National University Singapore/Dakshin Foundation, University of Delhi, Visva Bharati University and the VMH. Ray serves as the project director and is working alongside a leadership team including Tim Barringer, Paul Mellon Professor of the History of Art at Yale, and Sengupta. During their workshop, the research team will work with local scholars from Kolkata.

The workshop is planned to take place in Kolkata in January 2022 with the virtual symposium in September 2022. The South Asia Center and the Department of Art and Music Histories are co-sponsoring the project with the help of a generous donation from Todd B. Rubin ’04. This is Ray’s fourth NEH award.