University Vice President and Chief Facilities Officer Pete Sala admits that thought crossed his mind when Cydney Johnson, vice president for community engagement and government relations, came to him with the idea of hosting several Syracuse high school students for a month this summer as interns at the physical plant and with food services.

But then Sala discovered that the students were already learning the necessary skills through the Syracuse City School District’s Career and Technical Education (CTE) program. And when the student welders from Corcoran High School showed up with top-of-the-line blow torches and other equipment they had received through the program, Sala was sold. 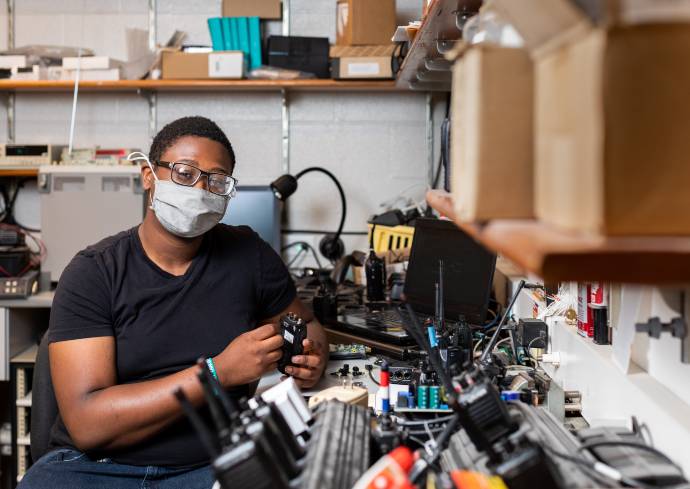 Josiah Rouse, one of 11 high school students who interned at Syracuse University this summer, worked in the electronics shop under supervisor Ted Woodruff.

“Then it was like, wait a second, this could be something special,” Sala says. “These kids didn’t come here without any knowledge of what they were getting into. The fact that they were as prepared as they were made this so successful.”

So successful, in fact, that University officials are already in discussions with the school district to expand the program next summer and perhaps host students at other times of the year.

“It started out smaller, but I’d love to see it get much larger with dozens of students involved, perhaps with multiple sessions over the summer or other internship opportunities for the community,” says Kris Klinger, the University’s senior associate vice president of auxiliary services who oversees Food Services. “It’s a great opportunity for us to build a workforce that is willing and able to work.”

Josiah Rouse, who is entering his junior year at Fowler, was one of the 11 students who interned this summer. Rouse worked under supervisor Ted Woodruff in the electronics shop at the physical plant and says the experience made him realize that working at the University one day was not out of his reach.

“It’s a good opportunity to really know if you want to do this or not,” Rouse says. “Being here made me think this is something I want to do for the rest of my life.”

Johnson has worked on a myriad of community engagement projects in the past year, but none had as many moving parts—or was as dear to her heart—as this one.

Since 2016, Johnson has been a member of the Syracuse City School District’s Partnership Council, which is co-chaired by SCSD Superintendent Jaime Alicea and focuses on career pathways for students, specifically through the CTE program. In the past year, Johnson had extensive conversations with Alicea and SCSD officials Nick Lisi, Susan Centore and Bruno Primerano about how internships could benefit both the students and the University.

Johnson’s is one of University’s Vice Chancellor for Strategic Initiatives and Innovation Mike Haynie’s direct reports, and with Haynie’s approval Johnson reached out to Sala and Klinger to see if hosting interns was feasible. Sala and Klinger said they were on board and Cathy Bottari, labor relations senior specialist, and Food Services Director Susan Bracy handled the paperwork and logistics needed to bring the students on campus, particularly during a pandemic. 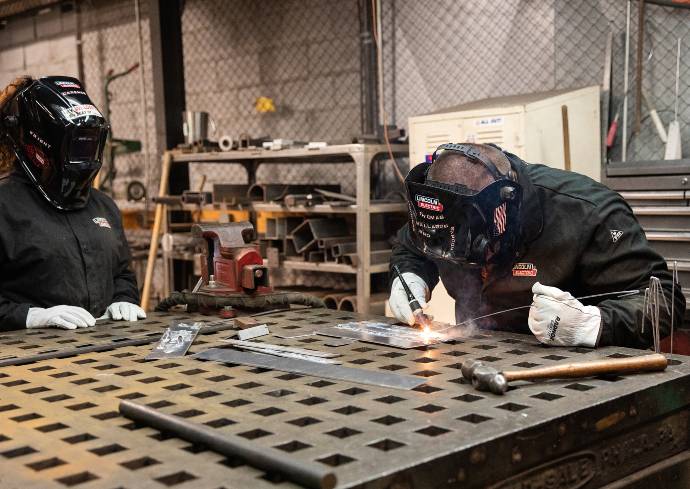 Students worked in the welding shop under the supervision of Scott Wright and Robin Light.

The CNY Works employment center in Syracuse agreed to provide funding so the students could be paid, and CTE summer internship coordinator Scott Lane and the other SCSD officials secured parent approvals and worked on other details from their end.

As the saying goes, it really does take a village.

“I am so grateful to Pete and Kris for their support and enthusiasm for this pilot program, and also the city school district team supported by CNY Works,” Johnson says. “A lot of people came to the table to make it possible.”

The students worked under supervisors and other employees who made sure the students felt at home in their workplace and were involved in all day-to-day activities. The supervisors included Bracy (food services), Robin Light (machine shop and welding/general maintenance), Christopher Myslow (Drumlins Country Club), Richard Stach (auto garage), Brian Wheeler (carpenter shop), Woodruff (electronics shop) and Scott Wright (welding/general maintenance).

“One of the things that I’ve learned working with the Partnership Council is that you can’t underestimate what it means to a young person to come to big place such as Syracuse University to have an experience like this,” Johnson says. “It is life-changing, and that’s what we want, to give them life-changing events and it’s up to us to make it happen.”

For Fadumo Hassan, working for Bracy at the Schine Student Center restaurants has been a life-changer. In addition to honing a variety of food service skills (greeting customers, serving food and prepping food), Hassan’s internship opened her eyes to the importance of universal skills such as responsibility, time management and working for and with others.

“This is my first job, my first work experience, and it was really fun,” says Hassan, who’s entering her senior year at the Institute of Technology at Syracuse Central (ITC) high school. “I enjoy my co-workers the most; they’re really nice and have been walking through everything with me.”

Hassan, who is in the CTE culinary pathway at ITC, was one of three students who worked for Bracy and rotated at Schine’s three restaurants (Halal Shack, CoreLife Eatery and Dunkin’). Once they got comfortable with their surroundings, Bracy says, the students fully embraced their jobs. 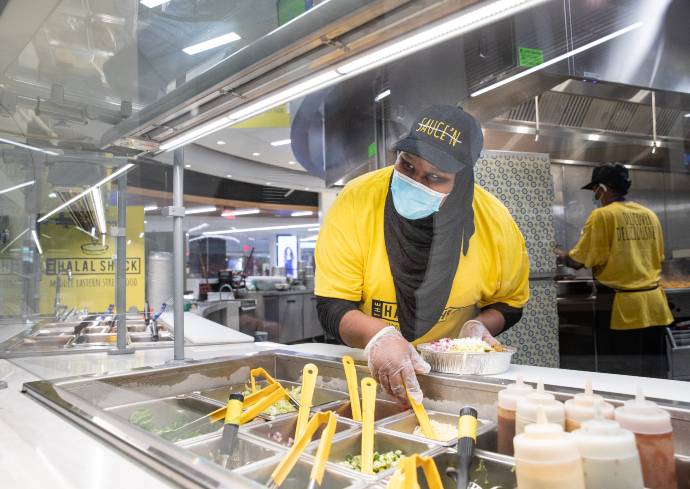 Food Services Director Susan Bracy says students like Fadumo Hassan “really want to be in the program” and may continue working for the University.

Bracy says the internship may help the students find a job at a CoreLife Eatery or Dunkin’ in the Syracuse area because they’re now fully trained. But more importantly, two of the three students have indicated that they’d like to work more at the University in the future.

Klinger, the University’s senior associate vice president of auxiliary services, says his department is always on the lookout for student help. Of the more than 2,400 staff members employed by auxiliary services, 1,200 to 1,400 are students at any one time.

“The internship is like a working interview; you know what you’re getting and that’s not often the option or case,” Klinger says. “It really seems like these kids want to work and learn as they applied to get into the program and are taking full advantage of it.”

Before joining Syracuse, Klinger spent 11 years as an assistant vice president in the University of Southern California’s auxiliary services department. At USC, Klinger says his department offered several programs that supported the local community and helped fill his staff and he hopes to offer similar programs here.

“There are a lot of ways to develop the students’ skills and I’m excited to see what we can come up with,” Klinger says.

Hassan, who wants to work for the University again, says she will be sure to tell her friends in the culinary program at ITC about the summer internship.

“It was a really good experience and you get paid, which is a nice bonus,” Hassan says, smiling.

‘We’ve Got to Continue This Program’

Josiah Rouse, the 11th-grade student at Fowler, says he has known since he was in seventh grade that he wanted to work in electronics. Interning under Woodruff, the shop supervisor, and with electronic technicians Bill Drew and Jim Perkins, Rouse observed or participated in a variety service calls, including a check on the fire alarm systems throughout the University.

In talking with their supervisors and co-workers, Rouse and the other students who interned at the physical plant learned more about the schooling and training they’ll need to land a job one day, perhaps at the University.

“As far as employment goes and a career, it’s definitely a great career opportunity,” says Woodruff, who oversees electronics, maintenance and new construction at the physical plant. “Working for a big institution like this, it’s a city within a city and no one trade can do it all. They’re high-demand jobs that pay well.”

Woodruff says the students’ “interest and enthusiasm” made it easy for the supervisors to pass along their knowledge. Sala, the University’s vice president and chief facilities officer, says in addition to the students’ top-end equipment, he was impressed by the commitment shown by the students and their families. 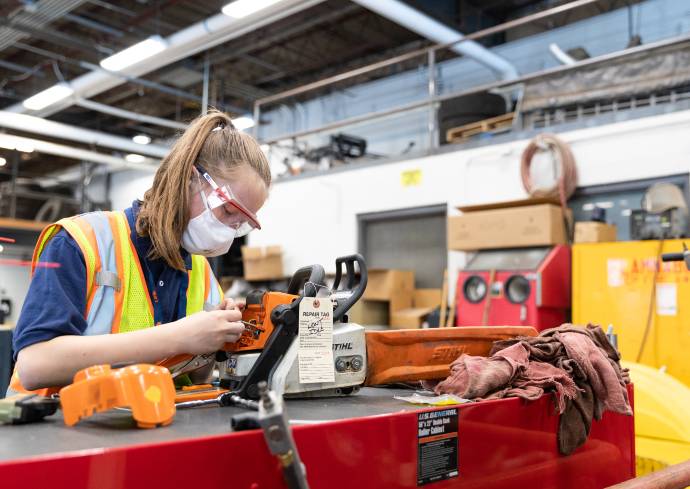 University Vice President and Chief Facilities Officer Pete Sala says “we’ve got to continue this program” and he’d like to see it expand next year.

“When we first met them, some of them brought their parents and you know there is buy-in when the parents are there to say, ‘My child is so excited about this program,’” Sala says. “The first day, we ran through eight hours of safety training, got them lunch and safety gear and that immediately made them feel like part of the team. My supervisors were all very pleasantly surprised at how all this went.”

As with Food Services, Sala saw the program as an opportunity to create a pipeline for jobs at the University that have been traditionally hard to fill.

“When I took over (as chief facilities officer) in 2015, I wanted a trainee in each one of these trade areas because they’re so hard to find,” Sala says. “And when I met with these kids, I said, ‘Get through this program because there will always be a job for you here at Syracuse University.’ This is an opportunity for us and the University to educate these young people and find good help.”

To that end, Sala says, “we’ve got to continue this program” and he’d like to see it expand to add students for his stadium staff and with his campus planning, design and construction team. Johnson says she would like to add more students next summer and perhaps at other times of the year, and create programs where CTE students can visit campus and learn about all the options that are available to them at the University to reach their career goals.

“I have been working with the Syracuse City School District and the CTE program for five years and this summer was really indicative of the growth and success of the program,” Johnson says. “These students are capable, ambitious and eager to learn, and they bring strong skills and an interest in gaining experience in a real-world setting.”