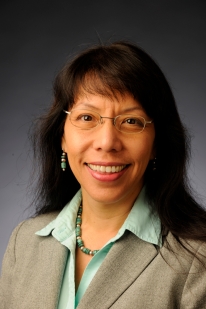 Makana Chock, David J. Levidow Professor of Communications in the Newhouse School, has been awarded a $75,000 research grant from Facebook Reality Labs to explore the impacts of augmented and virtual reality (AR/VR) on bystander privacy.

Chock will work with Se Jung Kim, a doctoral student in Newhouse’s mass communications program. They will focus on two countries with disparate cultural norms—the U.S. and South Korea—to examine the impact of cultural differences on privacy concerns and ultimately inform the design of AR/VR technology.

“This is another example of how many of the leading communications companies in the world are turning to the Newhouse School to better understand some of the challenges we are facing as a society,” says Newhouse Dean Mark J. Lodato.

Chock developed her proposal, “AR/VR recording: Cultural differences in perceptions of bystander privacy,” in response to Facebook’s request for proposals on responsible innovation in AR/VR: “Consider Everyone.”

Chock says the “ubiquitous and covert nature” of AR/VR recording poses the threat of serious privacy violations as bystanders are captured without permission. At the same time, different societies often have different concepts of bystander privacy, and those differences are reflected in the way image recording is regulated.

In the individualist culture of the U.S., recording bystanders in a public space is largely accepted and often protected under the First Amendment. In the collectivist culture of South Korea, where a higher premium is placed on privacy, express permission is required to record individuals. Yet even there, younger adults regularly post images and recordings on social media that may contain bystanders.

“Over the last few years, immigrants in both the U.S. and South Korea have faced restrictions and increased scrutiny from the government agencies, as well as discrimination and bullying from some members of their communities,” she says. “These factors may heighten concerns about privacy and the potential misuse of immigrants’ personal information or images. It is therefore important to increase awareness among AR/VR users of bystanders’ concerns and the potential for inadvertent harm.”

The three-part study will begin with an online survey conducted in both countries to assess potential differences in bystanders’ privacy perceptions and concerns and identify additional concerns of targeted immigrant groups. The team will then conduct a series of in-depth interviews with a subset of survey participants to provide additional qualitative data about cultural differences in bystander privacy concerns. Finally, they will facilitate a series of focus groups comprised of U.S. and South Korean users in a multi-user social VR environment in order to determine if the cultural differences seen in “real world” public spaces also apply in social VR spaces.

Chock is set to be the founding research director of the Newhouse School’s new XR lab and is co-leader of the Virtual and Immersive Interactions research cluster at Syracuse University.

In a national first, the College of Law has partnered with legal education nonprofit AccessLex Institute to offer the institute’s interactive Helix Bar Review prep course free of charge to all Syracuse Law students. Helix Bar Review is a state-of-the-art,…

Syracuse University’s S.I. Newhouse School of Public Communications has announced the creation of a collaborative entrepreneurial program that will integrate a unique set of services, facilities and capabilities for digital media and media tech startups. The Newhouse-based collaborative workspace, which…

‘Students With Disabilities Could Sue Their Schools to Require Masks’

Doron Dorfman, associate professor in the College of Law, co-wrote commentary for The Washington Post titled “Students with disabilities could sue their schools to require masks.” Professor Dorfman studies the intersections of health, law and social science to understand perceptions…