Tickets are now on sale for the second Coming Back Together (CBT) Celebrity Basketball Classic. The game, which features memorable names from Orange athletics, takes place Thursday, Sept. 9. Tickets can be purchased online at Cuse.com/ticketing or by calling 888 DOME TIX. 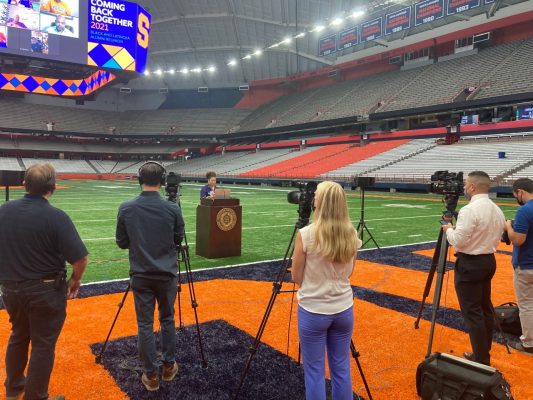 Members of the media were on hand for the announcement of this year’s CBT Celebrity Classic.

“This year’s game promises to be extremely exciting, as it will take place in our newly renovated stadium,” says Rachel Vassel, associate vice president of Multicultural Advancement. “All money raised will go specifically to the Orange Legends Scholarship, which is an Our Time Has Come (OTHC) fund created by Syracuse University athletes who want to make an impact for students from underserved communities.”

The game serves as a kickoff for the 13th CBT, the triennial on-campus celebration in honor of our Black and Latino/a alumni. Recently, some of the athletes returning to campus got together to talk about the game, its impact and their love for getting back together. It’s obvious they enjoy one another’s company and their memories of playing in front of the fans.

“For me personally as a kid who grew up in Pioneer Homes just a short distance from the stadium, there are certain things that make you smile,” says Rob Drummond, a former NFL running back who attended the University in the mid 1980s and will be taking part in the CBT Celebrity Classic. “My last game at the stadium the fans gave me a standing ovation. I had tears in my eyes. I won’t forget that moment nor the love I have for my teammates and the people here today. That’s what this is all about. It’s about family.”

An Orange family. A family that knows it is stronger together.

“I think the cause, to bring underrepresented students to Syracuse University, that’s the joy all of us get out of this,” says former NBA and Syracuse University basketball player Derrick Coleman, who will serve as one of the team captains. Billy Owens, who also played in the NBA and for the University, will serve as the other. This time around there is a bit of a revenge factor, as Coleman’s squad defeated Owens’s team at the first Celebrity Classic in 2017. “It was great for everybody to come together,” says Owens. “I’m looking forward to this year and bringing the trophy home for Team Owens.”

Ultimately, though, the players are doing this for students like Taylor M. John, a senior who is studying global health policy, citizenship and civic engagement, with a minor in Chinese language. John is an Our Time Has Come scholar, one of nearly 1,500 hundred OTHC scholarship recipients awarded since the program was founded at the University in 1987. The scholarships help provide opportunities for underrepresented students. “For me, it’s all about community and mentorship,” says John. “It’s about bringing students and alumni together to network and share what it means to bleed orange.”

These are some of the legends taking part in the CBT Celebrity Classic:

Twenty five of Syracuse University’s most promising women and non-binary people have been selected to join the inaugural leadership development cohort launched by the Women in Leadership Initiative (WiL). Beginning with reflective readings this summer, cohort participants will participate in…

Samuel “Sam” Scozzafava Jr. G’12, vice president and chief information officer, and a longtime member of the Syracuse University community, today announced he will retire from the University after more than 15 years of service. Eric Sedore, chief technology officer,…