Kathy Hochul ’80, New York State’s lieutenant governor and an alumna of Syracuse University’s College of Arts and Sciences and Maxwell School of Citizenship and Public Affairs, has become the 57th and first female governor of New York State.

Hochul, a former U.S. Congresswoman who represented New York’s 26th congressional district in western New York from 2011-13, has served as the state’s lieutenant governor since 2015. She was head of government and strategic relations for M&T Bank at the time of her lieutenant governor nomination. 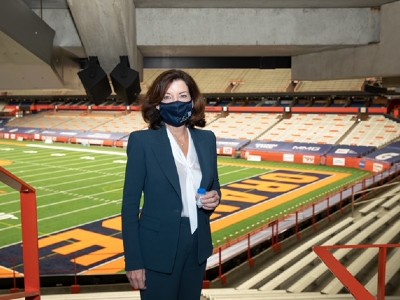 Gov. Kathy Hochul ’80 during a visit to campus in April

She previously served as a practicing attorney, member of the Hamburg Town Board, (1994-2007), deputy county clerk (2003-07) and clerk (2007-11) of Erie County in western New York. Earlier in her career, she was a legislative aide to Congressman John LaFalce and Sen. Daniel Patrick Moynihan (D-NY), a University Professor in the Maxwell School, and was instrumental in drafting legislation related to campaign finance reform, immigration reform and combating drug abuse.

She also spearheaded the state’s “Enough is Enough” campaign to combat sexual assault on college campuses. Hochul participated in a roundtable discussion on sexual and relationship violence at Syracuse University in April 2015.

Hochul has spoken to student veterans as part of the Veteran and Women Igniting the Spirit of Entrepreneurship (V-WISE) program and to student entrepreneurs and has helped to celebrate the opening of new laboratories at the SyracuseCoE.

She earned a bachelor’s degree in political science from Syracuse in 1980 and holds a juris doctor degree from Catholic University.