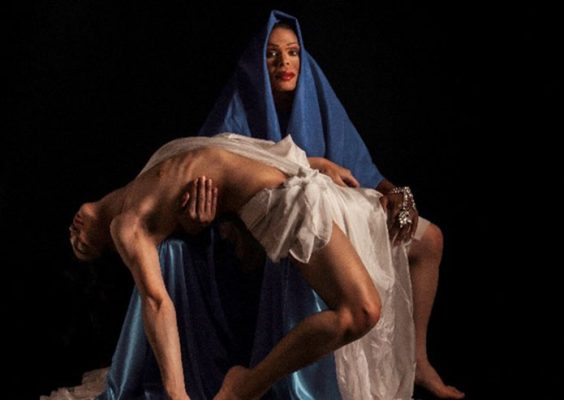 “Noli Me Tangere,” an exhibition by artist Kelvin Burzon, will be on view Aug. 30-Dec. 10 at Point of Contact Gallery. Admission is free and open to the public Mon.-Fri., noon-5 p.m. or by appointment, with proper social distancing and face masks worn over the nose and mouth. Guided tours will be available virtually or upon request.

Kelvin Burzon is a Filipino-American artist whose work explores intersections of sexuality, race, gender and religion. As a child growing up in a Filipino culture, Burzon’s initial ambition was to become a Catholic priest. “I have always been interested in the religion’s role in culture and familial relationships and have been drawn to the religion’s traditions, imagery, theatricality, and its psychological vestige,” says Burzon. His work is inspired by cerebral influences growing up in and around the church. “My cultural and familial identity, my memories as a child, cannot be separated from the church. It was an integral part of what it meant to be Filipino,” Burzon adds.

Burzon received MFA degree from Indiana University’s School of Art + Design, where he developed his most recent bodies of work. There, he was a performing member of the African American Dance Company, where he flourished in a collaborative performance outlet. This outlet blossomed interests in critical race theory, photography’s role in people’s social identities, storytelling, archival gaps and performance. Burzon received a bachelor’s degree from Wabash College, where he studied studio art and music. There, he became versed in painting, sculpture, ceramics and photography. He studied music history, violin and piano performance, vocal performance and years of ethnomusicology.

Burzon continues to push his work with inspirations from the past, recontextualized naratives and imagery of religion, paired with the never-ending stimulation and inspiration from the LGBTQ+ community. He seeks to push the limits of his work by visually redefining and creating a new narrative for himself and those like him.

“Noli Me Tangere,” “touch me not” or “don’t tread on me,” (Latin) is a series of photographs that examines an internal conflict of homosexuality and Catholicism. The photographs address, but don’t aim to solve, the contentions between religion and homosexuality. Utilizing appropriated religious imagery and language, the work is recontextualized by the insertion of LGBTQ members and activists posing as Catholic deities. Themes, lighting and color treatment are adopted from the works of Renaissance artists. The photographs are then presented as polyptychs in the style of Catholic altarpieces.

This program is possible thanks to the support of the College of Arts and Sciences, the Office of Cultural Engagement for the Hispanic Community, and the Coalition of Museum and Art Centers at Syracuse University, and is part of the University’s Humanities Center 2021-2022 Symposium “Conventions.”