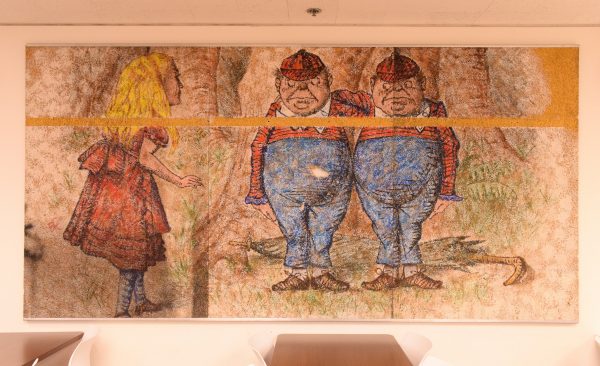 Original murals from Jabberwocky were recently installed at Bird Library. The murals depict scenes from Lewis Carroll’s “Alice in Wonderland” and were created by Mitchel Resnick ’76.

Visitors to the lower level of Bird Library can get a sense of what it might have been like to step into the former campus music venue Jabberwocky, which operated in the Kimmel basement from 1969-85.

Original murals from Jabberwocky were recently installed at Bird Library. The murals, which had been in private and University storage since Jabberwocky’s closing, depict scenes from Lewis Carroll’s “Alice in Wonderland” and were created by Mitchel Resnick ’76 (College of Visual and Performing Arts). They were painted in the 1970s on the original walls of Jabberwocky, which were made of tectum for noise control and durability.

The original murals, which took Resnick 2½ years to paint, were 10-foot-tall panels depicting characters from “Alice’s Adventures in Wonderland and Through the Looking-Glass,” and “What Alice Found There,” which includes the nonsensical poem “Jabberwocky.”

Jabberwocky, fondly referred to as “The Jab,” was a beloved student-run musical campus and community venue, which showcased emerging and well-known local, regional and national musicians, such as Charles Mingus, The Talking Heads, James Taylor, Jackson Browne, New Riders of the Purple Sage and Cyndi Lauper.

“The Jabberwocky was clearly an iconic institution that defined a significant part of the student experience of the time,” says David Seaman, dean of Syracuse University Libraries and University Librarian. “The Alice in Wonderland murals were an inspired and fun backdrop for the many musical events that happened in Kimmel basement, and we are pleased to have them on display. I’m sure they will bring back fond memories  for alumni of the ’70s and ’80s.”

Murals will be displayed on the lower level of Bird Library through fall 2021.

Syracuse University Libraries, in collaboration with the College of Visual and Performing Arts, S.I. Newhouse School of Public Communications and WAER, are planning an event celebrating Jabberwocky as part of Syracuse University’s Orange Central alumni weekend on Oct. 30.