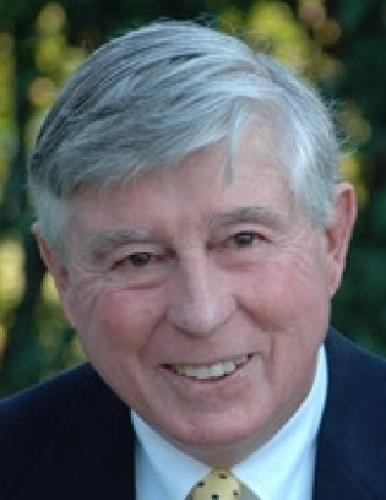 Coyne was first elected to the Board of Trustees in 1969 and served as a voting trustee until 2001. During his tenure on the Board, Coyne co-chaired the Gift Committee for the Campaign for Syracuse. He also served on the College of Law Advisory Board.

“Nick was devoted to his alma mater,” says Board chair Kathy Walters ’73. “He supported a wide variety of University programs, reflecting his personal passions and University priorities for student success.” In a 1987 New York Times article about the Dome, Coyne is described as a “Syracuse graduate, attorney and fan” whose excitement about the Dome reflected his optimism and passion for the Orange and their prospects for bowl games.

Coyne earned a bachelor’s degree in history from the College of Arts and Sciences and the Maxwell School of Citizenship and Public Affairs in 1954 and a J.D. from the College of Law in 1957. He played baseball and basketball for the Orange and was honored with the LetterWinner of Distinction Award in 1977.

Coyne joined Hancock & Estabrook LLP in 1957, became a partner in 1965 and retired in 1998. He was a former chair of the firm’s executive committee and specialized in labor relations in both the public and private sectors.

Coyne was widely known around Central New York for his volunteer work and was honored in 2011 by the Eldercare Foundation with the Eldercare Lifetime Achievement Award for his community service. He was a volunteer for and past board member of the United Way of Central New York Inc., chair of the board of trustees of WCNY and the Upstate New York Chapter of the National Multiple Sclerosis Society, and past chair of the board of directors of InterFaith Works (formerly the InterReligious Council).

The Orange commitment runs deep in the Coyne family. He is survived by his four daughters: Tracy Coyne Tenney, Carol Coyne L’81 (College of Law), Christina Coyne ’94 (College of Arts and Sciences) and Mary Frances Hayes G’88 (S.I. Newhouse School of Public Communications). His grandson, Fanning Miles Hearon ’20, is a graduate of the Falk College of Sport and Human Dynamics.